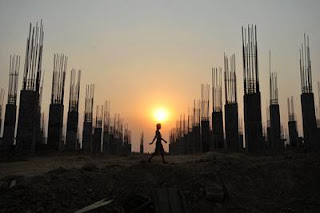 For decades it pursued a whole range of harmful policies, including multiple exchange rates and restrictive barriers to trade.

Rural development was held back by export restrictions on major crops, regulations that forced farmers to grow strategically important rice rather than more profitable cash crops and a ban on using farmland as collateral that effectively held back access to financial services. Poor macroeconomic management produced high inflation and the government budget was primarily used to fund the military at the expense of education and health care services.

As a consequence, Myanmar’s economic performance was dismal. It was the regional basket case — a poor, slow grower in the middle of the most economically dynamic part of the world.
But rapid economic reforms implemented since 2011 have turned Myanmar into a normal developing country. Key economic reforms include the unification of the exchange rate, liberalisation of trade and investment, a new law allowing for farmland to be used as collateral and some improvements in fiscal transparency.

On the last point, President Thein Sein’s commitment to implementing the Extractive Industries Transparency Initiative will allow the public to assess whether mining, gas and oil companies are paying what they ought to and whether Myanmar is getting a fair deal for its resources. The country’s political reforms also mean it is no longer an international outcast shunned by foreign investors and donors. The reforms have spurred growth and brought down inflation rates.

Myanmar is now growing at an equal rate to its ASEAN peers.

Initial economic reforms have focused on identifying quick policy wins that have a rapid impact in order to build support for further change. This strategy has directed the reformers’ attention to macroeconomic reforms and to opening up the economy to trade and investment. But so far the government has effectively avoided confronting the armed forces’ privileged budgetary position.

While Myanmar has normalised its economic policies and aligned its macroeconomic development with the trends of comparable Southeast Asian countries, it is far from a growth miracle. To lift growth above developing country averages and emerge as a star performer Myanmar must address remaining weaknesses. This includes managing the overvalued exchange rate, which is stifling private sector competitiveness. Still, the country can take advantage of significant economic opportunities in trade and investment as it re-engages with the wider international community. Myanmar is strategically positioned within reach of large emerging markets.

While Myanmar has accomplished some relatively easy reforms it must now address the fundamental challenges it faces. A fourth of its citizens live below the poverty line, child mortality is higher than in comparable neighbouring countries and a fifth of children in poor families are not enrolled in primary education. While the government has built up expectations for real welfare improvements few efforts have been made to meet the population’s need for healthcare and education.

Myanmar’s key challenges are to reduce poverty through rural development, generate employment for its people by encouraging a more dynamic private sector and provide improved health care and education services. The country’s new political diversity is likely to slow the pace of future economic reforms as a more vocal parliament and civil society seek a stake in policy making. Myanmar’s leaders will need enough political will to implement the next wave of reforms focused on public administration. The tough reforms are yet to come. Myanmar must change its fiscal priorities and reduce the amount of money the military receives.

Anders Engvall is a Research Fellow at the Stockholm School of Economics.
Soe Nandar Linn is a Research Associate at the Myanmar Development Resource Institutes Centre for Economic and Social Development.