North Korea's nuclear threats: How worried should we be? 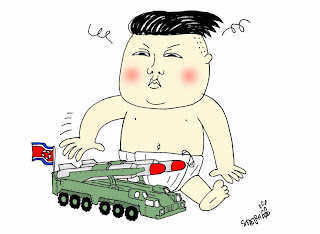 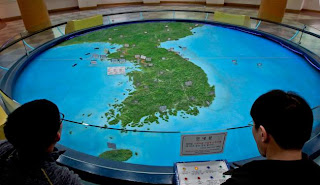 Visitors look at a miniature of the Korean Peninsula at the Odusan Observatory in Paju, South Korea, on April 7. North Korea closed the border to the South on April 3. It also restarted a plutonium reactor on April 2, and reportedly moved two missiles to the country’s East for strike


We're used to bellicose threats from Pyongyang against South Korea and the US. Is the latest posturing any different?

It's always difficult to separate North Korean bluster from the leadership's true intentions, but the latest escalation, following the introduction of fresh UN sanctions in response to the country's February nuclear test, is unusual. On April 3, for instance, South Korean workers were prevented from entering the industrial park of Kaesong, which the two nations operate jointly. This hasn't happened since 2009.

In concrete terms, however, the most important move is the April 2 announcement that the nation is "readjusting and restarting all the nuclear facilities" at Yongbyon, some 90 kilometres north of the capital. The site, which houses a small reactor that produced North Korea's stockpile of weapons-grade plutonium, had been closed under an agreement struck in 2007 during the six-party talks involving both Koreas, China, Japan, Russia and the US.

How much plutonium does North Korea already have?

In May 2008, North Korea stated that it held 38.5 kilograms of plutonium, extracted from spent nuclear fuel rods. If that figure is correct - and it seems reasonable given the capacity of the Yongbyon reactor - then "the stockpile they're sitting on is likely to be in the 6- to 12-bomb range", says Paul Carroll of the Ploughshares Fund in San Francisco, a group that supports nuclear disarmament.

If the Yongbyon reactor restarts, how quickly can it make more?

Under the terms of the 2007 agreement, the reactor was disabled rather than dismantled. Many of its components are stored on site, and can quickly be reinstalled. Experts disagree on exactly how fast the reactor could be up and running, but six months seems a reasonable estimate. Once restarted, it could produce around 5 kilograms of plutonium per year - enough for one bomb, maybe enough for two, if the nation's weapons scientists are confident of getting the desired explosive yield from a smaller quantity of fissile material. But the reactor might run for two or three years before the first plutonium harvest.

That doesn't sound like a game changer. Can North Korea boost its plutonium production in other ways?

Yes. "They're building another reactor next door," says David Albright, president of the non-profit Institute for Science and International Security in Washington DC. This experimental light water reactor is supposed to be for generating electricity, but it could be used to make plutonium, producing enough for about five bombs each year. Construction appears to be almost complete, although it's unclear when it will start operating. The April 2 statement made no specific mention of this reactor, so we don't know whether Pyongyang intends to use it for weapons production.

Why all the fuss about plutonium? Isn't North Korea also trying to make bombs from uranium?

That has been the assumption since a delegation of US scientists led by Siegfried Hecker of Stanford University in California, formerly head of the nuclear weapons lab at Los Alamos, was shown a uranium enrichment facility at Yongbyon during a visit in November 2010. Given the speed with which it had been installed, Hecker concluded that it probably wasn't the first that the North Koreans had built.

However, Hecker's delegation didn't see the plant working, and in any case it could be used to make low-enriched uranium to fuel the new light water reactor, rather than highly enriched uranium for bombs. Also, North Korea's nuclear scientists have done a good job keeping foreign observers in the dark about what types of weapons it has tested. Material vented after the nation's first nuclear test, in 2006, revealed that it was a plutonium bomb. But the tests in 2009 and again this year gave away little about the nature of the device. "They've been very careful not to let radioactive gases escape," says Charles Ferguson, president of the Federation of American Scientists in Washington DC.

Does the return to plutonium production mean that North Korea has hit problems making bombs with uranium?

This idea has been floated by The Washington Post, but remains speculative. "I would not make policy based on it," says Jeffrey Lewis, who heads the East Asia Non-proliferation Programme of the Monterey Institute of International Studies in California. Another explanation is that Pyongyang wants to create a diversified arsenal, so is working on more than one technology in parallel.

So North Korea has some nuclear weapons, and is trying to make more. But could it actually deploy them against South Korea, Japan and the US?

This all depends on whether North Korea has succeeded in making a miniaturised device that could be deployed on its ballistic missiles, as it claimed after February's nuclear test. US officials seem to be taking the threat seriously. Describing North Korea as posing a "real and clear danger", on April 3 US defence secretary Chuck Hagel ordered the deployment of an advanced missile defence system to the US Pacific territory of Guam.

Still, given that Pyongyang has yet to flight-test an intercontinental missile, the threat to the US seems remote. South Korea and Japan have more to worry about, as their cities are within the range of North Korea's No-dong missiles - and it is possible that the country has already built a device capable of being launched in this way. "I am inclined to conclude that North Korea has already accomplished this," says Lewis.

However, North Korea's new leader, Kim Jong-un, would probably be signing his regime's death warrant if he ordered such a strike. Even a conventional military response from the US, which has pledged to defend its allies, would devastate the isolated and impoverished nation. "It would be utterly suicidal," says Carroll. By Peter Aldhous
New Scientist
McClatchy-Tribune News Service