India and Pakistan compete for influence in Afghanistan 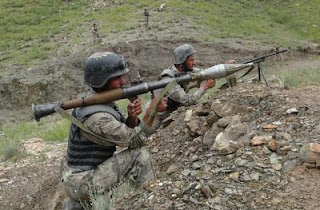 As the United States, the Karzai government and the Afghan resistance (branded as the Taliban by the Western powers and media) engage in various moves to secure an advantageous peace in Afghanistan, India and Pakistan are jostling to fill the vacuum US forces will leave behind when they leave.

Afghanistan’s importance derives from its location as a bridge between Central and South Asia. The country that dominates Afghanistan potentially dominates the natural resources of Central Asia and, through Pakistan, can bring them to the Indian Ocean. Afghanistan has long been the victim of political games played by different regional and international rivals. The next few years are unlikely to be any different.

The 2700-kilometre-long Pakistan–Afghanistan border is rugged and nearly impossible to control. The area is dominated by the Pashtun tribes — over 40 per cent of the Pashtun population lives there — who pay little attention to official maps, and successive Afghan governments have refused to recognise the ‘Durand Line’, which Pakistan insists represents the border.

Pakistan’s Afghan policy is driven by fear of encirclement by India through alliance with Kabul.

For much of Pakistan’s first three decades of independence Afghan territory was used to fan demand for a Pashtun homeland carved out of Pakistan. India covertly supported these demands, but the separatist movement weakened after the Soviet invasion of Afghanistan in 1979. Still, Pashtun irredentism remains a threat. Many in Pakistan see hints of separatism in the successful demands of the Awami National Party (a political creation of the Indian National Congress-allied ‘Frontier Gandhi’, Abdul Ghaffar Khan) for Pakistan to rename the province Khyber Pakhtunkhwa.

Fearing encirclement and possible separatism, Pakistan will try very hard to influence who forms government in Kabul and what policies that government pursues. Pakistan’s requests consequently seem unreasonable to Afghanistan — Hamid Karzai’s spokesperson said on 29 March that Pakistan demands ‘we cut all ties to India, send army officers to Pakistan for training, and sign a strategic agreement’. While Pakistan denies going so far it has repeatedly irritated the Afghan government by giving a heavy-handed impression.

India has historically supported all Afghan governments except the Taliban, and the Pakistani intelligentsia and its decision makers believe that India’s strategy follows the advice of Kautilya, the ancient Indian military philosopher, who argued that ‘immediate neighbours are considered as enemies, but any state on the other side of a neighbouring state is regarded as an ally …’

India gave US$2 billion in aid to Afghanistan during the last decade, which puts India among the top four aid donors to Afghanistan. India knows that Pakistan cannot match this money and it wants to use aid to deny Pakistan the ability to make critical decisions. In short, the aid is in service of India’s soft power. It serves India’s strategic goals and encourages the government in Kabul to remain at odds with Pakistan.

Pakistan is deeply suspicious of four Indian consulates in addition to the embassy in Afghanistan.

It considers Indian outposts to be covert centres of subversion against Pakistan.

Over 200 Afghan military officers attend Indian military institutions under the two countries’ Strategic Partnership Agreement. By contrast, Pakistan has been unable to engage with the Afghan military. Its hard-won deal to get 11 Afghan military men to take part in a simulated military exercise at training institutes in Quetta collapsed at the last minute late in March.

What of India’s interests? India accuses Pakistan of turning the Mujahideen toward Indian-held Kashmir once the Soviets withdrew from Afghanistan. As a consequence, India fears the return of a Pakistan-aligned conservative regime in Kabul. Its main goal is to minimize Pakistani influence in Afghanistan. As a spokesperson for the Indian External Affairs Ministry said in March 2013, ‘… there is a history of Afghan soil being used for terror attacks on India. We can’t have that again’.

But India is also desperate to reopen land access for trade with Afghanistan and beyond. Pakistan currently allows road access for Afghan exports to India but does not allow India to export to Afghanistan. This is perhaps economically counter-productive — Pakistan is denying itself huge transit fees and the benefits of regional economic engagement.

But unless Pakistan is secure in its relations with India and confident of Indian intentions in Afghanistan, it will continue to believe that its interests are best served through securing a friendly government in Kabul. Meanwhile, Pakistan fears India is set to continue destabilising the Pakistan-Afghan border at the cost of uneasy relations with Pakistan.

This is in neither country’s long-term interest. Three-way cooperation is a pre-requisite for the economic development of this energy-deficient region and for wider economic engagement with other sub-regions in Asia.

Sajjad Ashraf was a member of Pakistan Foreign Service from 1973–2008. He is now adjunct professor at the Lee Kuan Yew School of Public Policy, National University of Singapore and visiting senior research fellow at the Institute of Southeast Asian Studies, Singapore.