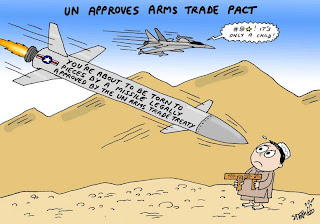 The United Nations General Assembly overwhelmingly approved the first U.N. treaty to regulate the estimated $60 billion global arms trade on Tuesday.
The goal of the , which the U.N. has sought for over a decade, according to , is to keep illicit weapons out of the hands of terrorists, insurgent fighters and organized crime.

Iran, Syria and North Korea voted against the treaty, the same three nations that blocked the treaty's adoption at a negotiating conference last Thursday.
The 23 countries that abstained included a handful of Latin American nations, as well as Russia, one of the largest arms exporters. Russian envoy to the United Nations Vitaly I. Churkin said his country had misgivings about what he called ambiguities in the treaty,including how terms like genocide would be defined.

"The treaty would require states exporting conventional weapons to develop criteria that would link exports to avoiding human-rights abuses, terrorism and organized crime. It would also ban shipments if they were deemed harmful to women and children. Countries that join the treaty would have to report publicly on sales every year, exposing the process to levels of transparency that rights groups hope will strictly limit illicit weapons deals."

In the U.S., there from the National Rifle Association. The gun lobby fears that the treaty would be used to regulate civilian weapons, and the NRA has vowed to fight ratification in the Senate.

The treaty will not, in fact, control the domestic use of arms in any country, but nations that ratify it will be required to create and enforce national regulations to control the transfer of conventional arms, parts and components and regulate arms brokers.

That list originally contained the phrase  "at a minimum," but the wording was dropped, at the insistence of the U.S