Russia’s partnership with China a matter of necessity 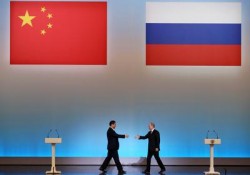 On 22 March, during his first visit to Russia since assuming the Chinese presidency, Xi Jinping and Russian president Vladimir Putin spoke about deepening the two countries’ strategic partnership

Chinese and Russian officials also signed 30 agreements on cooperation in the areas of energy, trade, technology and military exchange.

There is little doubt that Russia’s partnership with China is an essential component of Putin’s foreign policy. But it is a partnership born out of necessity, rather than choice. Sergey Karaganov, a former presidential advisor to Putin, recently noted that the Russian public mind and most of the elite still view China’s rise as a threat rather than an opportunity. Underlying this attitude is what Karagonov refers to as a ‘hidden — and often overt — expectation’ that China will not be able to develop as expediently and quickly as it has done in the past for too much longer.

So why is the partnership necessary for Russia? First, it is necessary at the symbolic level — partnering up with a rising China acts as a kind of force multiplier. Russia on its own could conceivably be seen as an emerging power, but this is still debatable, and even Russians are ambivalent about using the term. Ivan Krastev, a prominent commentator, suggests instead that Russia is not a classical emerging power, but ‘an ageing power experiencing temporary growth’. Others already speak of a ‘post-BRIC’ Russia.

There is of course no such doubt about China’s status. The Obama administration’s ‘pivot’ to the Asia Pacific is largely seen as a move to counter China’s increasing clout in the region.
The ‘pivot’ poses a dilemma for Russia. While it is not a key Asia Pacific actor for now, Russia’s relationship with China will play an important role in shaping its outlook in future. China is Russia’s biggest economic partner in the region, a prized energy customer and a purchaser of Russian weapons in large quantities. Bilateral trade between the two countries is also increasing at an exponential rate, rising from around US$8 billion in 2000 to over US$80 billion in 2011. But while China is now one of Russia’s biggest trading partners, the reverse is not true. And from Russia’s perspective, the EU is still a far more significant trading partner, accounting for at least half of Russia’s trade. Again, this raises the question of why Russia’s relationship with China is deemed to be of such importance.

The answer is that China and Russia share ‘neighbourhoods’ in some of the most crucial arenas for Russian economic and security interests: Central Asia and the Russian Far East (which borders China). China is a key economic partner for many administrative regions (oblasts) in the Russian Far East, particularly the Amur oblast and the Jewish Autonomous oblast — at one point, trade with China made up more than 90 per cent of Amur’s total trade turnover.

Furthermore, given Russia’s strained relations with the United States and Europe in the final months of the Medvedev administration and the first part of Putin’s third term, Russia’s relatively friendly relationship with China, at both the regional and global level, is proof of the partnership’s enduring strength. Indeed, China has come to occupy an ever more significant position in Russian foreign policy as a whole.

For instance, China forms a key part of Russia’s energy strategy, which is premised on a diversification of energy exports away from Europe, as highlighted by Gazprom’s recent 30-year gas deal with the China National Petroleum Corporation. Outgoing Chinese president Hu Jintao also met Putin on the sidelines of the 2012 APEC Summit to reiterate the need to expand bilateral energy cooperation. But Russia risks becoming over-dependent on China in the energy sphere and, indeed, on energy exports as a whole. During his incumbency, Medvedev tried to redirect Russia’s economic and trade relations away from an emphasis on energy exports, in part due to the reliance of elites on the lucrative rents these exports produce, but was unable to do this.

There are additional indications that Russia is wary of relying too heavily on its partnership with China, both economically and politically. Russia’s 2013 Foreign Policy Concept places greater emphasis on the role of multilateral regional forums in the Asia Pacific. A Russian think tank close to the President also recently noted that Russian interests cannot be ‘fully harmonised either with the United States or with … Chinese ambitions‘. In essence, these signals imply that Russia does not want to be seen as constraining China, but nor does it want to be seen as accommodating its rise.

Natasha Kuhrt is a Lecturer at the Department of War Studies, King’s College London.