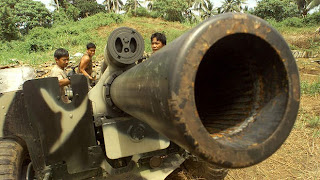 The Philippines says peace talks with communist rebels have collapsed and a target of ending the decades-long insurgency by 2016 is impossible to achieve.

"We are at an impasse now. Whether we talk or not, the same violence continues, nothing has changed. So why will we force ourselves to talk?" Padilla said.

Aquino had said he wanted to seal a peace deal to end the 44-year insurgency, which has claimed an estimated 30,000 lives, before his term ended in 2016.

When asked about the timeframe, Padilla said: "That is gone."

The government and the rebels had initially raised hopes in early 2011 that they were on the right track when they announced after top-level talks in Norway that both sides were committed to signing a peace deal by June 2012.

But negotiations barely progressed after that.

Padilla blamed the Netherlands-based communist leadership, the National Democratic Front, for the failure, accusing it of setting new and impossible conditions for talks such as the release of captured senior rebels.

He said this had been a tactic of the rebels in more than two decades of peace talks with previous administrations, and questioned their sincerity in seeking peace.

Padilla said the government had not yet decided on its "new approach" for dealing with the rebels but it did want to re-open negotiations at some point.

The military estimates the rebels have only about 4,000 fighters nationwide, down from more than 26,000 at their peak in the 1980s.

However, they remain a danger, particularly in rural areas where they can count on support from local populations who endure the worst of the country's savage rich-poor divide.

The rebels have become more active ahead of next month's mid-term elections when thousands of local positions will be contested.

They killed two aides to a politician on April 20, and the military has accused them of extorting millions of dollars from many candidates in return for allowing them to campaign freely.
The military said in February that the rebels killed 164 soldiers, policemen, security forces and civilians in 2012.
AFP