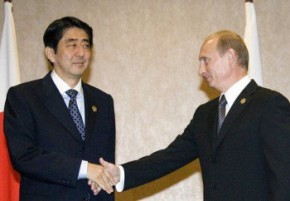 Moscow welcomes Abe for talks on the Kuriles

China's foreign policy has earned another stunning defeat. Beijing's ramping up of its threats to Japan's ownership of the Senkaku (Diaoyu) islands may have pleased the people at home - though even that is questionable - but its combination of military build-up and nationalist rhetoric has now led to yet another reaction, this time by Russia.

Just when China and to a lesser degree South Korea have been conducting their usual war of words about visits by ruling party members to the Yasukuni shrine, Moscow has been welcoming Japan's nationalist-minded Prime Minister Shinzo Abe. This is not only the first such visit in a decade but is leading to resumption of a dialogue between the two on their own territorial dispute, the Kurile Islands, which were seized by the then Soviet Union in 1945, in the waning days of World War II.

It has long appeared short-sighted for both nations to let this quarrel stand in the way of improving relations, which would clearly be of benefit to both, threatened in different ways by the rise of China - in the Russian case by the settlement of many Chinese in its thinly populated Far East and Eastern Siberia regions. At one point during Boris Yeltsin's time in office, settlement of the islands issue had seemed a possibility. But a revival of nationalist sentiment in Russia under President Vladimir Putin and the deterioration in Russia's relations with the west put relations with Japan back into cold storage.

So it is doubly interesting now that Russia is warming to Japan even as its relations - or at least those of Putin - with the west continue on a downward trend. There are evidently two main reasons for this. The first is obviously the rise of Chinese power. The second is economic. Russia not only wants Japan (and South Korea) as destinations for its energy and minerals. As commodity prices fall, Moscow needs to spur growth in the other sectors of its economy. Japan is an obvious place to look for technology and investment so it Abe is being accompanied by a large delegation representing Japan's major business houses.

Whether the Japanese can find many investment opportunities, particularly in the Far East, is open to question. Japanese generally have long had a rather low opinion of things Russian and the resurgence of nationalism in Japan, which has been stoked by China, could be an insuperable barrier to settlement of the Kurile issue. Nonetheless the visit points to the increasing complexity of geopolitics in northeast Asia.

It also represents a setback for China which had seemed to have developed strong mutual interests in limiting US influence. This was reflected in its participation in the Shanghai Cooperation Organization a grouping with the twin aims of keeping militant Islam in central Asia at bay and doing so independently of the US. It was also reflected in Russian sales of advanced military aircraft to China.

While Moscow will continue to make all the correct noises about friendship with China, the Abe visit and the renewal of talks on the Kuriles come on top of Russia's efforts to bolster its old friendship - and military cooperation with - Vietnam just as the time when Hanoi has been seen in the front line of resistance to China's ambitions to own the South China Sea.

As for Japan it hopes that Russia also still has some vestiges of influence in North Korea - or at least would play a positive role if there were any signs that Pyongyang was itself moving to a more flexible position. After all the alarms about nuclear tests and rocket launches, the Korean situation seems calmer. Having shown what a tough young guy he can be, maybe Kim the Third will focus on economic development, in which relations with Russia and Japan can be a useful balance to those with China and South Korea.

Russia and Japan are both declining powers that are belatedly coming to see the need for protecting their futures rather than letting old antagonisms stand in the way of mutual aid. China's bizarrely aggressive posturing over the past year or more has been the catalyst. Asia Sentinel