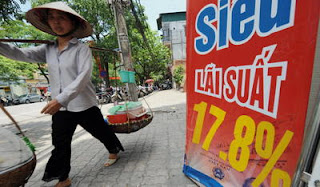 The tight monetary policy that Vietnam introduced in 2011 has revealed deep fissures in the country’s political economy. These fissures have emerged because the economy is comprised of two largely autonomous sectors.

The first is a dynamic, competitive export sector, specialising in labour-intensive manufactures and agricultural commodities. The second is a protected sector, dominated by state-owned and state-related firms, which has survived largely on the basis of easy credit and favoured access to land.
So the credit tightening decision in 2011, made necessary by a steep rise in consumer prices in 2011, exposed the indebtedness of firms in the second group, and the extent of their involvement in speculative ventures. Meanwhile, the competitive sector steamed ahead.

Credit growth was rapid for many years in Vietnam, but lending spun out of control over two separate periods beginning in 2007. The first wave of lending was induced by a sharp rise in capital inflows. Inflation rose with asset prices, and the government was forced to rein in credit in mid-2008. With the onset of the global financial crisis, the government introduced monetary stimulus to compensate for softening export demand. This sparked a second, longer credit boom that again set prices climbing. The stimulus was left in place too long, but the government eventually tightened fiscal and monetary policy to contain inflation and reduce pressure on the Vietnamese dong.

These successive lending waves of inflation resulted in a phenomenal expansion of corporate balance sheets in the non-competitive sector. Much of this credit was channelled into speculative ventures. The value of these assets plummeted when credit flows dried up, leaving thousands of domestic companies effectively insolvent. Estimates of bad debt range from 10 to 25 per cent of national income, about 40 per cent of which is held by state-owned commercial banks. The rest is distributed among joint-stock commercial banks. A large proportion of bad loans are collateralised by land and property investments, and the rest by other assets in the non-competitive sector.

Liquidating these assets will not be easy. Managers of state-owned companies who sell assets for less than their purchase price can be accused of ‘destroying state assets’, a crime punishable by imprisonment and, in extrema, death. Banks find it difficult to foreclose under existing rules and recoveries average only about 15 per cent of loan value. The healthier banks are hoping to grow out of their difficulties. But, as long as they are forced to carry these assets, lending growth will be slow and the companies themselves are severely cash strapped.

The situation is complicated further by the interconnectedness of shareholding, debt and corporate management. In order to meet minimum capital requirements, banks have sold shares to other banks and finance companies that they had either self-financed or that had been funded by bank loans. State-owned enterprises (SOEs) also bought into the joint-stock banks, and then borrowed from the same banks (in contravention of the law).

The government has correctly identified structural reform of the banking system, SOEs and public investment as the essential preconditions to restart rapid economic growth. In all three spheres, policy makers have shown a preference for incrementalism and experimentation rather than radical change, as a result of the political tension of the past few years. In the banking sector, the State Bank of Vietnam is organising mergers and buy-outs of the weaker joint-stock banks and some managers of state-owned banks have been removed, but there is no appetite for deeper reforms. The approach to SOE reform has also been piecemeal and erratic. Few state companies have been sold off, and SOE managers still have enough power to resist more radical restructuring.

The government intends to establish an asset management company, which would either buy bad debt directly from banks or broker the sale of bad debts to the public. This could just move the problem from the banks’ to the government’s balance sheet, which would be a risky move. But the creation of an asset management company would be helpful to cash-strapped SOEs and could also help with the problem of contracting state assets.

Despite this grim domestic situation, the economy in 2012 achieved a respectable 5 per cent annual growth rate, and the competitive sector has continued to thrive. Remittances and foreign direct investment remain robust, ensuring that the State Bank of Vietnam has sufficient foreign exchange to maintain currency stability over the medium term.

The most likely scenario for 2013 is slow but accelerating growth. Lending will restart as the healthier joint-stock banks clean up their balance sheets. The competitive economy will motor ahead, creating jobs and generating foreign exchange. The government will engineer resolutions in the banking and SOE sectors.

Could the government accelerate the recovery by undertaking deeper structural reforms? From a narrow economic perspective, the answer is yes. Non-performing loans and unrealistic asset prices are holding back growth. An aggressive program of bank restructuring would create a healthier financial system that would be better positioned to finance growth in a sustainable manner.
Imposing higher standards of disclosure and corporate governance on SOEs, and allowing them to sell off assets at market prices would help. Crucially, removing various forms of protection is needed to force state companies to create value rather than carve up domestic markets. But state banks and SOEs still have enough influence to resist reform, and, until that changes, talk of structural change will remain just that.