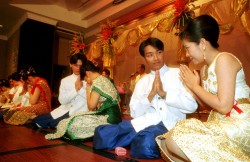 As countries in Asia go through difficult demographic transitions, marriage patterns have never been more important.

Asia was traditionally characterised by universal marriage — defined as when fewer than 5 per cent of women have not married by the age of 50. But this is no longer the case: over recent decades countries in East and Southeast Asia have seen the demise of universal marriage, and this has directly contributed to declines in fertility in many countries to ultra-low levels because there is almost no childbearing outside marriage. Yet in other parts of Asia, especially in South Asia, it is not the failure of people to marry that is of concern but the persistence of high levels of teenage marriage, much of it occurring below the legal minimum age. This is the case, for example, in Nepal, Bangladesh, and India.

Marriage patterns across Asia are diverse. Though many countries in East and Southeast Asia now show patterns of very delayed marriage, not all of them do. The people of Japan, South Korea, Taiwan, Thailand and Myanmar marry late, while the people of Indonesia marry earlier. Almost all women in China are married by the time they reach age 30 — but this pattern is not repeated by ethnic Chinese populations elsewhere in the region (including Hong Kong), which have extreme patterns of delayed marriage. Interestingly, it is not that women marry very young in China, but rather that marriages are concentrated in the 20s to a much greater extent than in other East and Southeast Asian countries.

What has been responsible for these remarkable differences in marriage patterns? In many East and Southeast Asian countries, delayed marriage can be linked to rapid economic development, rapidly advancing educational levels for women and related changes in employment patterns.

Traditional arranged marriage systems have collapsed, and women, who no longer need a husband for financial security, are delaying marriage. Given the changing balance in the pool of potential spouses, with a much higher ratio of well-educated women to well-educated men than before, traditional attitudes are getting in the way. Women in the region still prefer to marry up, and men are often reluctant to marry someone who is better educated or makes more money than they do. To add to these factors, effective matchmaking procedures have not emerged to replace the earlier arranged marriage systems. It all makes for a large population of singles who would actually like to marry. On the other hand, there are people who deliberately choose not to marry, often because of a desire (particularly on the part of women) to avoid what goes along with marriage — having children, the stresses of managing a career and childraising, and caring for parents-in-law as they age. Uncertainty in the labour market and the high financial costs of raising children are also relevant issues. The exact ratio of singles by choice and singles by circumstance is unclear.

By contrast, in South Asia arranged marriage systems have shown great resilience. Why has this been the case in the patriarchal and patrilocal family systems of South Asia but not the patriarchal and patrilocal Confucianist-influenced family systems of East Asia? (Southeast Asia is in a category of its own because it has bilateral kinship systems, meaning more flexibility in such things as inheritance and post-marriage residence). Part of the explanation may be simply a ‘developmental’ one: East Asian countries have experienced sustained and rapid economic growth, and rapidly rising levels of female education. In South Asia, these developments have been much slower. Whatever the reason, high levels of parent-arranged teenage marriage are still the case in north India, Bangladesh and Nepal, although Pakistanis, on average, get married considerably later. Many of these arranged marriages take place below the official minimum age for marriage and in contravention of Article 16 of the Universal Declaration of Human Rights, which states that ‘marriage shall be entered into only with the free and full consent of the intending spouses’. The young brides also tend to give birth at a very early age, which leads to adverse health consequences for both mother and child. Marrying at a very young age also normally makes it impossible for girls to complete their education and perpetuates the unequal power relationship between women and their typically much older husbands.

The rise in singlehood in East Asian countries shows no signs of levelling off; indeed, if anything, it accelerated in Japan and South Korea over the past decade. Governments are nonplussed about possible policy levers to encourage marriage. Singapore has gone much further than other countries in trying policy approaches, including direct government involvement in matchmaking but has had little obvious success.

Asian countries are just as diverse in patterns of breakdown of marriage as of entry into marriage. While the high divorce rates in Malay-Muslim populations fell drastically in the 1960s and 1970s, divorce rates throughout East and Southeast Asia appear to have been generally on the rise since the 1980s, partly because the stigma attached to divorce appears to have faded. But divorce rates remain generally very low in South Asian countries. Rather than reflecting more harmonious marriages, low divorce in this region is because the marriage system does not permit the ‘escape route’ of divorce.

Overall, then, trends in forming and dissolving marriages in Asian countries are the outcome of the interaction of socio-economic development and cultural systems. Not surprisingly, the outcomes across the region are diverse.

Gavin W. Jones is Professor of Sociology and Director of the J.Y Pillay Comparative Asia Research Centre at the Global Asia Institute, National University of Singapore.
This article appeared in the most recent edition of the East Asia Forum Quarterly, ‘Demographic Transition’.