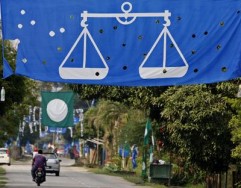 Malaysia’s 13th general election, scheduled for 5 May, is shaping up to be the tightest in the country’s near 60-year history

The ruling coalition, Barisan Nasional (BN), should slightly edge out the opposition, Pakatan Rakyat (PR), but will probably fail to reclaim the coveted two-thirds majority necessary to amend the constitution. Behind the divisive rhetoric of this unofficial campaign season, however, neither camp has formulated a viable, long-term solution to one of Malaysia’s most insidious problems: fiscal imprudence.

Malaysia’s struggles with public finances are nothing new. With the exception of a brief period in the mid-1990s, Malaysia has long maintained a fiscal deficit, and in 2012 its budget deficit was one of the region’s largest, at 4.5 per cent. It has also done little to reign in public debt, which at 53.7 per cent of GDP in 2012 sits right under the debt-ceiling threshold of 55 per cent of GDP.

Although Malaysia’s deficits aren’t inherently irresponsible, they do reflect a concerning trend of ‘hidden’ public debt. This includes contingent liabilities, such as government guarantees on debt and ‘off balance sheet’ borrowings, which have more than doubled since Najib Razak took office in 2009. This debt surge comes from government entities that fund massive transportation and infrastructure projects. It is not inconceivable that these liabilities may eventually find their way onto the federal balance sheet. Additionally, the government’s revenue stream, which has remained unimpressively low, is too heavily reliant on the state oil company Petronas, responsible for almost 35 per cent of federal revenues.

Underpinning many of these structural issues is a proclivity for subsidies and cash handouts, particularly when an election is on the line. As BN recovered from the political shock of the 2008 election that saw PR erase its parliamentary majority, Najib unleashed budgets saturated with voter-friendly measures. The 2013 budget provided bonuses to over 1.3 million civil servants, cash for low-income families, smart phone rebates and a cut in the income tax rate. These additions reflect the political reality that prudent fiscal management does not carry votes in Malaysia. Malaysians frequently lament the rising cost of living, making subsidies politically expedient for anyone running for office.

Malaysia’s 13th general election is no different. PR’s leader, Anwar Ibrahim, and Najib are competing for the hearts and minds of Malaysia’s electorate, promising to deepen their pockets, shower them with gifts and reduce their taxes. Anwar unveiled his election manifesto 25 February, outlining an agenda replete with election sweeteners. He promised free secondary education, lower car prices, an increased minimum wage, and greater oil revenues for Sabah and Sarawak. Najib revealed his electoral platform on 6 April, proffering his own brand of populist pledges. He promised to raise the annual cash handout for poor households from US$165 to almost US$400, build one million new affordable homes and similarly subsidise car prices. Najib also delayed the implementation of a goods and services tax, which would expand the tax base and ease the government’s dependency on oil revenues. The electoral payoffs for these political ploys make it risky for any leader to advocate for long-term fiscal management.

However unpromising this election cycle has been, one policy prescription has emerged that could drastically alter Malaysia’s financial future. PR has advocated reforming the country’s longstanding quota system favouring Malays, opting instead for a system based on socioeconomic status. Eliminating racial preferences in public contracts could conceivably yield more efficient and useful government investments, and free up revenue for the high subsidies PR wants to dole out. More importantly, this reform will reinvigorate Malaysia’s domestic competitiveness and empower truly disadvantaged segments of society. If implemented correctly, it would signal to the international investment community that business in Malaysia no longer runs on cronyism and race-based politics. Touting an improved investment environment could position Malaysia to better compete for much-needed foreign investment in the region, easing pressure on the government to drive investment.

To be fair, Najib has taken strides to roll back some of the archaic policies benefiting Malays. In 2009, he overturned a longstanding requirement for certain companies to sell at least 30 per cent of their shares to Malays. But the prime minister stopped short of addressing the bulk of preferential racial policies that infuriate ethnic Chinese and Indian Malaysians, particularly those in education and government contracts. The United Malays National Organisation is still the most influential party component in BN, essentially guaranteeing that Malay interests will continue to guide the coalition’s policies. Regardless of Najib’s own ambitions, institutional impediments to achieving reform in this area may be too powerful to overcome.

Indeed, the policies of neither BN nor PR instil much confidence in the country’s medium-term fiscal future. Malaysia’s electoral politics fail to reward fiscal prudence and instead encourage shortsighted economic measures. But if the government cannot extract racial considerations from the economy, Malaysia risks falling deeper into financial mismanagement.
Liam Hanlon is a political analyst at Cascade Asia Advisors, a research and strategic advisory firm focused on Southeast Asia.