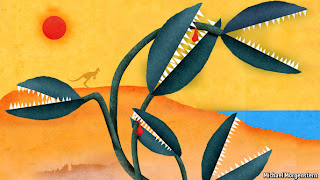 ONE thing that sets Australia apart from its Asian neighbours is the interminable, vicious public infighting that scars its politics.

On March 25th Julia Gillard, the prime minister, shuffled her cabinet for the fourth time since scraping home in an election in August 2010. She purged it of supporters of Kevin Rudd, her predecessor, whom some of her Labor Party colleagues had tried and failed to install as her replacement on March 21st. Australian commentators wrung their hands at the tawdry politicking.

“Our long national nightmare continues,” lamented Sam Roggeveen on a blog on the website of the Lowy Institute, a foreign-affairs think-tank in Sydney, fretting that Australia was becoming a laughing-stock. It is true that its politics provokes a smirk or two elsewhere in Asia. Few could argue with Ms Gillard’s assessment that the coup attempt was “unseemly” and “self-indulgent”.

The Labor Party’s troubles date back to Mr Rudd’s stint as prime minister, from 2007-10. He alienated his colleagues and was losing popularity, so the party toppled him ahead of the 2010 election. Many were taken aback both by the suddenness of his downfall, and the ruthlessness with which Ms Gillard knifed him. He seems never to have given up hope of a comeback. A Mandarin-speaking former diplomat, in public he is an appealing character: erudite, eloquent, witty and even, on occasion, self-deprecating. In opinion polls he has consistently scored much higher than Ms Gillard as the leader who might secure victory in the next election, which she has called for September 14th.

The sad truth for Mr Rudd, however, is that many of his Labor parliamentary colleagues, who choose the leader, cannot stand him. According to James Button, who worked briefly as a speechwriter for Mr Rudd, writing in the Sydney Morning Herald, “behind closed doors he consistently treated people with rudeness and contempt.” He had no chance of unseating Ms Gillard and, for the second time in their three leadership contests, did not even compete in the leadership ballot she called. Hence the “Chicken Kev” taunt thrown by another columnist and former Labor speechwriter, Tim Soutphommasane.

Ms Gillard, on the other hand, a former industrial-relations lawyer with strong ties to the trade unions that back Labor, has again shown her toughness. In a recent interview with the Canberra Times she said that, in politics, you have to be “a pretty hard bastard”. Tony Blair, a former British prime minister dogged by intraparty conspiracies, had told her politics was afflicted with a “new brutality”. She spoke of how technology has transformed the media, encouraging “more drama, more shock, more horror”.

At least now Mr Rudd has promised Ms Gillard his “100% support”. Even if he had his fingers crossed when he spoke, Ms Gillard can probably concentrate for the next six months on fighting the opposition rather than looking over her shoulder. Still, if the opinion polls are to be believed, she needs quite a turnaround to avoid a humiliating defeat in September.

Perhaps her best hope is that the conservative opposition coalition has as self-destructive a recent history as Labor’s. Its leading force, the Liberal Party, has had four leaders in the past six years. Tony Abbott, the incumbent and probable coalition candidate for prime minister, is not its most popular politician. The man he ousted in 2009, Malcolm Turnbull, is a bigger vote-winner. Ms Gillard, whose finest moment as prime minister was a blistering attack last year on Mr Abbott for alleged misogyny, may feel she still has a chance.

Australian politics seems locked in a culture of democratic coups, with the perverse effect that the leading parties fail to field their best candidates. And, when not dominated by tales of back-stabbing leaders and their muck-spreading sidekicks, they are taken over by scandals of sleaze and graft.

Asia’s big democracies—India, Indonesia and Japan—have all faced difficulties in finding leaders acceptable both to their parties and to the electorate. India’s Congress party seems likely to resort, by default, to a dynastic succession; the most popular politician in Indonesia, Joko Widodo, Jakarta’s governor, is not yet even a candidate in next year’s presidential election; Japan is on its seventh prime minister in seven years (and it is his second go in that period). In all three countries politics is even more unseemly, self-indulgent and even corrupt.

This sounds like an advertisement for autocracy. On a superficial view, China, for example, does not suffer from this leadership instability. One ten-year regime has just given way, in a choreographed transition, to another, expected to endure until 2022. But in fact, Chinese politics also closely resembles Australia’s. There, too, no politician forgets that, as Mr Rudd put it in 1998, “politics is about power”. There, too, leaders are chosen by factional intrigue. There, too, politics is dominated by personal rivalry. And there, too, the public’s preferences are of secondary importance.

The difference is that Australia’s politics is played out in the open. Uniquely in the rich world, Australia is enjoying its 22nd consecutive year of economic growth. If this is a national nightmare, who wants to wake up? Moreover, as Mr Roggeveen forecast, the leadership kerfuffle played out peacefully according to the rules of Australia’s democracy: “No troops on the streets and probably not even a demonstration.” Australia may in fact be Asia’s most stable country.

By comparison, China’s politics inhabits the shadows, except when some scandal, such as the Bo Xilai affair last year, casts a lurid light. And when that happens it calls the whole closed system into question. As Mr Roggeveen noted a day after his doom-laden blogpost, the latest Rudd-Gillard tussle did not make Australia a laughing-stock after all. It was widely seen as a non-event. It must be chastening for Australia’s leaders that their squabbles seem irrelevant. But it is also a lesson in the benefits of transparency. By Banyan for The Economist