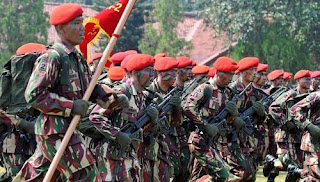 Once feared for its record of human rights violations, the elite 5,500-strong Kopassus had an unblemished record since 2005

NDONESIAN army commander Pramono Edhie Wibowo, on the eve of his retirement, must have his head buried in his hands lamenting how a single brutal act has undone much of the work he had put into cleaning up the special forces (Kopassus), where he built his career.

Once feared for its long record of human rights violations - mostly committed in Aceh, East Timor and Papua during then President Suharto's New Order rule - the elite 5,500-strong force had, since 2005, had an unblemished record.

In fact, in many ways, the unit seemed to represent the best demonstration of reform in the Indonesian Armed Forces (TNI).

That is, until the night of March 23, when masked gunmen, armed with old Soviet-bloc AK-47 training rifles, raided a prison on Yogyakarta's northern outskirts and executed four detainees accused of murdering a former Kopassus soldier at a nightclub.

The 11-man squad had driven two hours from the Kopassus Group 2 base, east of Yogyakarta and one of two reinforced battalions specialising in counter-insurgency and unconventional warfare. They were chased by colleagues trying to stop them.

The attackers took the trouble to not carry their usual American and German weapons - that would have been a dead giveaway. But the grenades on their belts, their sophisticated radio gear and the military precision of the 15-minute raid left little doubt over who they were.

It took military police investigators less than a week to identify and extract confessions from the perpetrators despite initial denials of army involvement by the Central Java regional commander, Major-General Hardiono Saroso.

General Pramono, who is the brother-in-law of President Susilo Bambang Yudhoyono, called a rare press conference on April 2 to say there were indications that Kopassus soldiers had taken part in the prison raid.

But the formal admission did not come until four days later.

Dr Yudhoyono, a retired general, was quick to quash efforts by TNI spokesmen to use "spontaneous" revenge and comradeship as justification for what he called an act of "street justice".

Maj-Gen Saroso lost his job, as did Yogyakarta police chief Sabar Rahardjo, who reportedly had the four victims remanded to the lightly guarded prison because he feared an attack on his own headquarters, where they were first detained.

It is not clear what punishment awaits Group 2 commander Maruli Simanjuntak, the son-in-law of former trade minister and special forces veteran Luhut Panjaitan, who had been in the job for only a day.

But social media postings praising the extra-judicial killings speak volumes about the sad state of law enforcement and growing public disquiet in Yogyakarta over alleged close ties the police have with criminal gangs.

The bad blood between the military and the police stems mainly from competition for resources, particularly since the two forces were separated in 1999 and the police took over responsibility for internal security.

But how a group of heavily armed men could leave their base without the knowledge of their superior officers may only become clear when the case is heard by what the military has promised will be an open court martial.

Certainly, there are questions about what the nightclub victim was doing there.

One claim was that he was on "field intelligence duty" - short-hand, perhaps, for the common practice of a soldier moonlighting as a security guard.

Gen Pramono worked hard with the International Committee of the Red Cross and other civil rights organisations at improving Kopassus' image during his term as special forces chief between July 2008 and December 2009.

Earlier, he had played a key role in the difficult decision to list and eventually bring to account 18 brother officers accused of rights abuses, including eight who either resigned their commissions or were dishonourably discharged.

Up till then, TNI had not helped its cause by defiantly promoting many who were on the blacklist.

Washington had to apply pressure on the army to dismiss six territorial soldiers after they had completed their light prison  sentences for torturing Papuan villagers and killing and beheading a
Protestant minister in two different incidents over the past three years.

Now, it will be watching intently to see if Jakarta's actions match its rhetoric in dealing with the prison killings.

Much will depend on what the soldiers are accused of. Anything short of murder, such as the "disobeying orders" charge levelled against those in Papua, simply is not going to cut it.

The killings could not have come at a worse time for United States officials currently working through all the bureaucratic and legal hurdles to ensure that when full contact does resume, every Indonesian soldier has a squeaky-clean record.

So too for Gen Pramono. He once led the elite of the elite - Kopassus' 500-strong Unit 81 anti-terrorism force, where any new joint training with the US Special Forces will logically begin.
By John McBeth, Straits Times PHOTO: AGENCE FRANCE-PRESSE