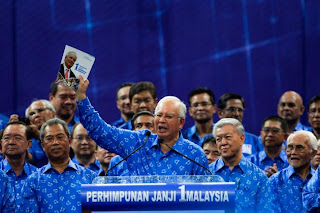 Regardless of the outcome of 13th general election later this month, Malaysia's political landscape will no longer be the same. In fact, imminent political and social changes have taken place in the past decades but at a snail pace. However, the speed has picking up gradually and steadily. Now, it is reaching the highest velocity in the past four years. After 57 years under the coalition known as Barisan National (BN), the Malaysians, especially 13 million plus voters, will have the chance to demonstrate if their country still need the status quo or emerge as a developed and democratic Muslim nation both within Asean and beyond.
The fact that it has taken Prime Minister Tun Najib Razak nearly a year to decide on the new election showed his anxiety as well as UMNO, the ruling partner of BN. During this time, the Malaysian society has grown up quickly especially with the young well connected generation. There will be 3.2 million first time voters this time around. Their votes and choices would be crucial for the future of their country. The opposition coalition, Pakatan Rakyat, is doing the right put by putting more young candidates than the BN.

Malaysians today are no longer live in fear, which has been perpetuated by the power wielders that without them, the delicate balance of various stakeholders - Malay, Chinese and Indian - would be upset and inevitably led to the chaos as in the past. Apparently, the prevailing sentiment now in Malaysia is: "Malayu pantang dicabar." It is translated as Malays do not like to be black mailed. Therefore, that kind of fear mongering, which worked well previously, but increasing losing streaming due to local dynamics pertaining to the growing confidence of Malaysians and ability to live harmoniously in diversity. Unlike the past, the majority of Malays has now moved to urban areas, no longer the kampongs. They want something more idealism.

In the age of social media and instant information society, both old and new generations know and appreciate their country's potential, which has been held hostages by the narratives carefully crafted by the ruling coalition. Ethnic politics in Malaysia is moving toward a new plateau where cross-ethnic line voting will be a more common trend. That helps explained why the opposition coalition was able to crack the BN vote in the last election in 2008. At the upcoming election, the first time voters will determine which coalition gets the run. They all know that Malaysia that is inclusive with all stakeholders working together will be stronger and more democratic.

In the near future, the Malay-first policy, installed in the 1970's, is no longer work as the country gets richer and escapes the middle income trap. In more ways than one, the upcoming election would increase the pressure for the BR to do away with this discriminatory practice. If the opposition wins more seat than the previous election, it would further impact on the leadership of Tun Najib Razak with UMNO and subsequently force the BN to come up with new reforms. It is an open secret that some of the country's best minds, especially the Chinese and Indians, have decided to live outside the country. The brain drain has been endemic and it has to stop.

Political development in other Asian countries such as South Korea and Taiwan, which used to be tightly controlled by ruling parties, offered valuable lessons for Malaysia. Despite the authoritarian nature of the system in both countries, it provides the solid foundation for further reforms through increased openness and transparency. Existing institutions such as anti-corruption commission, election commission as well as media and civil society group can now be more open without any fear of anarchy as witnessed through some "bottom-up" political transformation.

Malaysia can open up its democratic space quite readily because the country has large middle come citizens, vibrant civic groups and social movements. Media should be liberated from the diktat of political parties and return to the watch-dog role as the online media are doing. Malaysia that is truly democratic with all stakeholders will become the new game changer in Asean.

Malaysia has always been a key catalyst within Asean. During the Cambodian conflict, it was Malaysia that plucked the Asean conservative stance into a more proactive policy of engagement with all conflicting parties, especially Vietnam, which led subsequently to peace process in Cambodia in early 1990's. When the Western economic powers proved to be dominating, Malaysia took the lead again to shift the center of gravity to Asia. Least we forget, after many name changes and morphing, the much heralded East Asia Summit (EAS) - the premium leaders only forum - is actually a Malaysian endeavour to engage Asian countries for Asian interests. Remember, former Malaysian prime minister Mahathir Mohammed proposed the original East Asia Economic Cooperation, which was shot down repeatedly. Miraculously, it survives as EAS including the US as a member too. At the time, he was the only Asean leader who dare to lash out at the Western leaders and their countries.

Unlike other Asean countries, Malaysia trends to say no to any scheme the country does not like. They like to do things fast and furious especially those related to ts international image and standing. For instance, the country is a strong supporter of Palestinian rights and other issues related to the Middle East. Malaysia has been the most hostile country against Israel. Last year, it helped to broker peace in the Philippines. Now, it has covered the south of Thailand even though it is still early where it is heading. The recent conflict between the Philippines and Malaysia over the Sabah could undermine Malaysia's image as a peace maker internationally - not to mention the overwhelm condemnation of the invaders.

All in all, Malaysia is reaching a tipping point. The election coupling with recent developments in the region will serve as a litmus test whether Malaysia will emerge as a fully democratic nation in the near future. If so, ripple effects to the rest of Asean will be far-reaching.
Bangkok Post