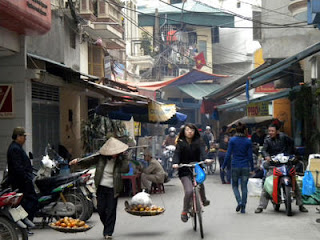 Vietnam, though a one-party state, has perhaps been rather more responsive to, and successful in, reforming the economic, social and political conditions of its citizens than might have been presumed from the nature of its political system.

Over the past three decades a centrally planned economy has largely been supplanted by a market economy and collective farming abandoned in favour of individual household farming — significantly the consequences of bottom-up pressure for change to which the country’s Communist Party leadership has acquiesced.

Yet the country is now at a critical point in its economic and political history where there are real questions about whether the ability of the system, as it is presently structured, is sufficiently responsive to pressures for change to avoid major economic and social crisis.

The evidence of public discontent and protest has become more widespread. Almost daily, there are protests large and small about injustices of one kind and another and citizens demonstrate at government and Communist Party offices in Hanoi, Ho Chi Minh City and elsewhere. The most prevalent of these complaints are about local and provincial officials who seize farmland, with minimal compensation, and then give the property to investors and developers in exchange for huge amounts of money and other benefits. A common view among those who demonstrate is that corrupt officials are stealing not just people’s land but also the livelihood of those who once owned it.

The more serious problems are at another level. Since the global financial crisis, the banking and financial system has been under stress, exposing weaknesses deeply rooted in the political economy of the state. While the market economy in Vietnam has thrived, its success highlights the emergence of the gulf between the dynamic, competitive export-oriented part of the economy (closely integrated with international business and specialising in labour-intensive manufactures) and the protected rump that is dominated by state-owned enterprises and favoured by cheap state credit and favoured access to land property.

As Jonathan Pincus and Suiwah Leung explain in this week’s lead essays, bank reform is now at the centre of fixing this imbalance in the Vietnamese economy. The sharp contraction in credit in response to extreme inflationary pressure in 2011 exposed the indebtedness of firms in the cosseted state-owned sector as well as the extent of their involvement in speculative ventures. ‘Estimates of bad debt range from 10 to 25 per cent of national income, about 40 per cent of which is held by state-owned commercial banks’, says Pincus. Officially non-performing loans are said to be at 6–8 per cent of bank assets, a vastly understated estimate. ‘A large proportion of bad loans are collateralised by land and property investments, and the rest (are held) by other assets in the non-competitive sector. Liquidating these assets will not be easy. Managers of state-owned companies who sell assets for less than their purchase price can be accused of ‘destroying state assets’, a crime punishable by imprisonment and, in extrema, death. Banks find it difficult to foreclose under existing rules and recoveries average only about 15 per cent of loan value. The healthier banks are hoping to grow out of their difficulties. But, as long as they are forced to carry these assets, lending growth will be slow and the companies themselves are severely cash strapped’.

In March 2012, as Leung explains, the government responded to the unfolding banking crisis with a roadmap for bank restructuring called Decision 254. In the subsequent 12 months there was little action (with a few forced bank mergers) but the recent announcement that Vietnam will set up an asset management company to take over and ‘work out’ the non-performing loans of Vietnamese banks, and create a high-level coordinating committee to oversee the process of bank restructuring are, as Leung says, both welcome developments.

Vietnam’s banking sector clearly needs further reform but the core problem runs deeper.
While the economy has continued to grow at a respectable 5 per cent or more, the competitive sectors thrives and external reserves are strong, Vietnam’s growth potential is unlikely to be realised without deeper reforms. As Pincus suggests, a ‘more aggressive program of bank restructuring would create a healthier financial system that would be better positioned to finance growth in a sustainable manner. Imposing higher standards of disclosure and corporate governance on SOEs, and allowing them to sell off assets at market prices (also) would help’. But the real challenge is to remove the various forms of protection that allow state companies to survive off domestic rents and privileges rather than create value.

The core problem is that, in Vietnam as in China, state banks and SOEs are embedded in the political system in a way that allows them to resist reform. ‘Until that changes’, Pincus concludes, ‘talk of structural change will remain just that’. And if the challenge of change is not met, Vietnam risks being another economy consigned to the middle income trap.
Peter Drysdale is Editor of the East Asia Forum.