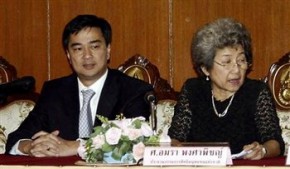 An important agency is rendered toothless by its Quisling chairwoman

Amara Pongsapich, the chairperson of Thailand’s National Human Rights Commission. must have felt frustrated to hear that former Prime Minister Abhisit Vejjajiva had been charged with murder in connection with his role in a military crackdown against pro-Thaksin protesters in 2010.
That is not because as the commission’s head she wanted to punish Abhisit for ordering brutal attacks on protesters during the April-May 2010 protests that wracked central Bangkok as part of her duty to defend human rights. It may be because she saw the need to protect Abhisit, the face of the Thai upper class of which she is a part.
Thailand’s human rights situation has been in dire straits, particularly since the military coup of 2006. Amara was selected to chair the newly established human rights body at a critical time in Thai politics where violence had been repeatedly used against the people, but she has been a disappointment for many in Thailand.
The Human Rights Commission was established in 2009 and its members were appointed, rather than elected, thus raising questions pertaining to its accountability, impartiality and transparency. The commission was established during the Abhisit administration, suggesting that her appointment could have been politically motivated.
Indeed, it has been rather clear that the two are close allies. Amara has never been politically neutral since the beginning. Her inclinations and sympathy toward the People’s Alliance for Democracy, the royalist Yellow Shirts, has cast doubt upon her ability to lead an important organization that deals with justice spanning multi-political ideologies and alignments.
A former professor and dean of Chulalongkorn University’s Faculty of Political Science, Amara earned her doctorate in anthropology from the University of Washington. Her research interests have been in the sociology of religion, development and cultural change, society and culture, women studies, and ethnicity. Supposedly, she must possess a deep understanding of the way in which human rights are defined.
But in reality, Amara has never condemned the use of violence in the hands of the Abhisit government against the red-shirt protesters. Some 92 were believed killed and 2,000 injured. The NHRC has been silent all along. This poses a question of whose interests Amara has been protecting.
When the Yingluck Shinawatra government decided to employ teargas to disperse crowds in the latest anti-government rally led by an elderly former general in late November, Amara and her NHRC were fuming. She immediately released a statement reproaching the government’s measures in dealing with the demonstrators.
“The government was over-reacting and the use of teargas was unacceptable,” she said. It is important to note that only a few casualties were reported during the rally, a stark contrast to what happened during April-May 2010.
Since the charges against Abhisit have been brought out into the public, Amara has, as expected, made no comment, even when Abhisit denied all responsibility. The intimate connection between Abhisit and Amara could have a played a role in the human rights commission’s lackluster response regarding the continuing investigation of several cases related to the 2010 violence.
In the aftermath of the 2006 coup, Amara was invited to join a constitutional drafting committee sponsored by the Thai junta. The result is the 2007 constitution which, as many would argue, has remained largely “undemocratic. Considering that she was a political science professor who taught her students about political ethics, Amara’s decision to serve the junta in such committee seriously called into question her own ethics and integrity.
Allying with the traditional elite appears to have rendered many benefits to Amara. She is herself an elite. There is little evidences that she genuinely cares about the rights of the Thai people, especially those in the underclass.
In 2010, upon taking up her position at the NHRC, she beautifully reiterated her passion for human rights protection.
“I enjoy learning about people from different backgrounds, how they live, what they believe and what is important to them,” she said. “My work has exposed me to many of the issues facing indigenous peoples and minority groups – the hardship they experience, the lack of access to basic social services and, as a result, the many opportunities that are denied to them.”
These statements have proved flimsy. Under Amara’s leadership, the commission has refused to discuss one of the most pressing issues in Thailand: the lèse-majesté law and its impact on human rights. Lèse-majesté cases have continued to skyrocket. More people have been charged with Article 112 of lèse-majesté law, both Thais and foreigners. Some have received extremely harsh sentences. And the NHRC did not even show its concern.
The case of Amphon Tangnoppakul, known in Thailand as Akong, who was sentenced to 20 years in jail for allegedly sending four text messages deemed insulting to the Thai monarchy, failed to alert the NHRC of the serious human rights violations. Akong died in prison on cancer this May. No sympathy was sent out to his family from Amara.
The NHRC has shown a marked lack of interest in many other cases involving political prisoners, as well as harassment against Thai academics in Thailand who spoke critically of the monarchy. This is a sad story indeed as Amara is also a one-time academic.
This year alone, the NHRC has enjoyed a hefty Bt173.59 million budget (US$5.67 million) for its works on the promotion of human rights. Yet, a big question is how Amara can justify the spending of this budget when the human rights situation has continued to deteriorate.
As evidence of further damage the reputation of her agency, Amara, at year’s end, has offered human rights awards to a number of dubious personalities, ranging from a celebrity monk, a controversial forensic pathologist and a detainee in a Phnom Penh prison who was arrested by Cambodia for provoking a conflict between the two countries.
Amara needs to reconsider her role as the leader of the commission. Her performance has let many of her compatriots down, as well as those who are monitoring the Thai human rights situation in the outside world.
(Pavin Chachavalpongpun is associate professor at Kyoto University’s Centre for Southeast Asian Studies.)