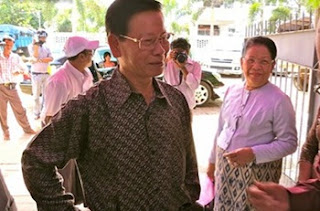 Khin Nyunt, once the terror of the country, reappears
Burmese exile journalist Aung Zaw, who has edited the independent Irrawaddy Magazine from the safety of Chiang Mai, Thailand for the past two decades, has made four trips back to Burma since it started to come clear that President Thein Sein was serious about introducing democratic reforms. The Irrawaddy itself will appear on Burmese newsstands this week with a 60-page full color edition This is the first time the magazine has been legally distributed inside the country.

On his most recent trip into Burma, a friend arranged for the editor to meet Khin Nyunt, the former chief of the secret police who fell out with other members of the junta and was jailed for seven years, only recently being freed. This is his account of meeting the onetime official who had been one of the most feared men in the entire country and who now only wishes to be a good Buddhist. It first ran in The Irrawaddy itself.)

I met Khin Nyunt at a religious ceremony, of all places. The encounter was arranged through a mutual acquaintance, who didn’t tell the former spymaster that I would be there. When he saw me, he looked as if he had seen a ghost. Right away, he said: “I am not a butcher. I didn’t kill anyone. I didn’t put anyone in prison.”

His words were a reaction to a recent episode of “Dateline Irrawaddy,” a popular weekly program that The Irrawaddy produces for broadcast by the Democratic Voice of Burma, in which we discussed his past role as head of the dreaded Military Intelligence, his subsequent downfall, and his recent remarks about wanting to return to national politics.

Many Burmese were shocked when he said in an interview with a news journal that he was thinking of returning to public life after more than seven years under house arrest following his ouster from power in 2004. When he saw me, he was quick to deny that he had any intention of going back into politics. “I will devote my time to religious and humanitarian missions,” the 73-year-old ex-spy chief said repeatedly, waving his hand as if to dispel a nasty rumor.

Regarding his days as one of the most feared men in Burma, he also felt a need to repeat himself. “I didn’t torture people, or put people in prison,” he said defensively, before adding after a pause: “But in the military, we have to follow orders.”

I found this last statement very interesting, as he seemed to be implying that he was merely an obedient soldier taking orders from his superiors during his years as the third most powerful member of the regime that seized power in 1988. At the height of his influence, there were only two other generals who were more powerful: junta strongman Snr-Gen Than Shwe and his deputy, Vice Snr-Gen Maung Aye. Both still hold considerable sway over the military and Burmese politics, despite retiring last year.

It was no secret, however, that Khin Nyunt once coveted the top spot in the junta that ruled Burma for more than two decades.

As a protégé of the late dictator Ne Win, Khin Nyunt quickly assumed a prominent role in the military council that seized power in September 1988 after crushing nationwide pro-democracy protests. His appointment as secretary one of the then State Law and Order Restoration Council (later the State Peace and Development Council) displeased its other members, however, because of his background as an intelligence officer. Rivalry between infantry and intelligence factions remained a source of tension throughout his tenure as the regime’s third-most powerful general.

There was no questioning his ambition, or his determination to become the eyes and ears of the regime. He seemed intent on knowing everything about everybody—something I experienced firsthand.

In the early 1990s, my name was added to the list of those deemed a threat to state stability, because of regular columns I wrote for the Bangkok-based daily The Nation and my “underground” journal, The Irrawaddy. Then, in 1994, I learned from a Thai (journalist) colleague that Khin Nyunt’s intelligence unit had asked a visiting Thai army chief to have me arrested. I went into hiding for several months.

Eventually, however, the Thais caught up with me—or at least they thought they did. When a Burmese intelligence officer flew to the Thai capital to examine the Aung Zaw being held at a Bangkok detention center, he went away disappointed. The person they had in custody was another Burmese man who happened to share my name. He was charged with illegal entry and deported. I have no idea what happened to him after that.

Now finally face to face, Khin Nyunt spoke only of his devotion to Buddhism and his desire to see his former subordinates released from prison. From conversations I had with former senior army officers in Naypyidaw, however, that seems unlikely to happen anytime soon. Many said that it was “not the time yet” to free the former MI agents who had kept extensive dossiers on all of the ruling generals. Some even felt that Khin Nyunt should still be under lock and key.

One conversation I had with a retired major general gave me some sense of how deeply the infantry officers distrusted Khin Nyunt and his underlings. I had heard rumors that this high-ranking officer always carried two pistols with him when Khin Nyunt was still a member of the ruling junta. I asked him if this was true, and he admitted it was. “Why did you keep guns with you, even in the war office?” I asked. “To defend myself,” he answered, leaving it to me to guess who he felt threatened by.

During our meeting, Khin Nyunt barely touched the food in front of him as he spoke about his time as a prisoner of the repressive regime he helped to create. I gave him my full attention as he described his routine while under house arrest, which consisted mostly of days full of chanting and meditation.

It was in October 2004 that Khin Nyunt’s elaborate intelligence apparatus was dismantled, shortly after he was removed from power and detained on charges of insubordination and corruption. He remembered that moment well. He had been summoned by Maung Aye soon after returning from overseeing some projects in a remote part of the jungles of central Burma that two years later would become the country’s new capital Naypyidaw, the “abode of kings.”

From then on, everything changed. “I was just a prisoner. We had nothing,” Khin Nyunt told me when I asked him how he survived during his years under house arrest. His wife, Dr Khin Win Shwe, sat next to him, nodding.

He said that the family’s only regular source of income was from selling orchids. When that wasn’t enough, they also sold off personal belongings—mostly expensive items acquired during trips abroad.

Even at his lowest point, however, Khin Nyunt never lost his wry sense of humor. When he and his wife were taken to Insein Prison in 2005 and a kangaroo court gave him a 44-year suspended sentence, he said sarcastically, “Thank you very much.”

But he didn’t take his new status as a victim of the regime lightly. With a rising voice betraying his suppressed anger, he spoke of how he was completely cut off from the outside world, with only state-run media to keep him informed of what was happening beyond his compound. “We had no telephone, no satellite TV, no Internet,” he complained bitterly. Only after four years was he allowed to receive a visitor, his former mentor Tint Swe, who had served as a minister under Ne Win. He came to bring some money to help support Khin Nyunt’s family.

In keeping with his new, more spiritual outlook on life, Khin Nyunt blamed his misfortune on bad karma from a past life. Most Burmese, however, would probably say that he didn’t even get what he deserved for his crimes in this life.

When I asked him if he thought he was the victim of a power struggle between the army and intelligence factions in the former regime, he waved the suggestion away, saying there was no such division. Before he could say any more on the subject, his wife cut him off and told him to be quiet.

Throughout our more than hour-long conversation, he was careful to say nothing that could be taken as criticism of those who had reduced him to his current humble circumstances. And yet, I felt that he was still seething with anger at a certain ex-general who is now enjoying his retirement in Naypyidaw, peacefully passing the time with his favorite books.

After spending the past year trying to meet this man, I realized after meeting him that he was still as elusive as ever. I also knew that if he did open up and say everything that was on his mind, there would be hell to pay—not just for himself, but also for those who so far have not paid any price at all for what they have done to Burma and its people. Asia Sentinel