The South Korean election: a step forward for women 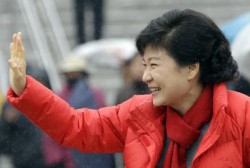 South Korea may soon have its first ever female president

Park Geun-hye of the conservative Saenuri Party is ahead in the polls in the final stages of campaigning. If elected, she will join the ranks of Asia’s other female heads of state who have benefitted from the political legacy of a patriarch — Benazir Bhutto, Corazon Aquino, Indira and Sonia Gandhi, Sheikh Hasina and Gloria Arroyo. Park Geun-hye’s father was the authoritarian architect of South Korea’s economic ‘miracle’, President Park Chung-hee.

Given how essential her heritage is to her success, Park’s election would serve to underscore the dismally low number of women in the Korean parliament. This is disappointing for those working to increase the participation of women in Korea’s formal politics. If further discouragements are needed they only have to look at the criticisms of Park’s candidature, which have included concern over the ‘appropriateness’ of a woman president to deal with the North Korean threat.

The upcoming election has, however, highlighted the importance of women as a voting bloc in South Korea’s electoral politics. Following democratisation in 1987, elections were fought and decided upon regional interests and the personalities that represented them. The last two elections have seen a shift towards more ideologically-based campaigns as well as the emergence of important voting blocs. One of the most prominent of these blocs is the ‘youth vote’ who secured Roh Moo-hyun’s election to the presidency in 2002.

This South Korean presidential election looks set to be decided on domestic issues because the main candidates have a similar policy position on North Korea. Park has criticised the current government’s isolationist policy toward North Korea and emphasises cooperation. Her opponent, Moon Jae-in of the Democratic United Party, has stated that his policies toward North Korea will continue on the trajectory set by Kim Dae-jung and Roh Moo-hyun of negotiation and engagement.

South Korean households are facing many everyday difficulties that are colouring the campaign. Korea’s export-led economy is slowing due to falling overseas demand and Koreans are saddled with high rates of personal debt. In view of growing social and economic hardships, welfare policy has become a central theme of the presidential campaigns. Well-executed welfare reform could especially help South Korea’s women. And in a country where voter turnout is often low, motivating a significant voting bloc such as women could, as with the youth vote in the 2002 election, be the key to a successful presidential bid.

Women in Korea bear the brunt of child rearing, care of aged relatives and household duties. They are also responsible for managing the burdensome extra-curricular schedules of Korea’s intensively-schooled offspring. To meet these onerous domestic demands, many of Korea’s highly-educated female population have had to sacrifice their career aspirations. The alternative has been for women to give up their hope of a family in order to advance their professional goals. The many women who have to work out of economic necessity have become symbols of Korea’s acute gender and economic inequality. Women in Korea earn 39 per cent less than men — the widest gap in the OECD.

The two main presidential candidates are pursuing the female vote with a host of polices including improved child care, reduced education costs, increased social insurance, and expanded public health care. The policy differences between the two candidates are in the details. The headline message is the same: reducing the burden that families place on women and providing women with the option of working outside the home.

Alongside these general welfare reforms is a progressive agenda espoused even by the conservative Park. In her women’s policy announcement she pledged to help women return to work by establishing ‘career coaching’ centres, to improve maternity benefits, encourage flexible working arrangements and introduce paternity leave. In a country where social acceptance of lone-mothers has only recently been accepted she has promised to triple the amount of financial aid for single parents.  The conservative party offering support to non-traditional family structures reflects the changing face of Korean society and the growing importance of women in the construction of election policies.

Korea still has a long road to travel to ensure that the equality suggested by a female head of state is reflected in the social, political and economic life of ordinary South Koreans. The progressive agenda espoused by the candidates is less about real reform and more about political calculation. It reflects the economic reality of demographics that demand increased female workforce participation. But the targeting of women’s interests in this election, even if only for base political reasons, will help nudge Korea in the direction of improved gender equality. And whilst it may be some time before we see an increase in the number of women in South Korea’s formal politics, we may well see a rise in the number of politicians pursuing a female-oriented agenda.