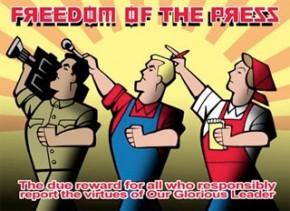 IS THERE more than one rational and reasonable way to construct a news-media system that maximises overall benefit for citizens (if not just for the journalists)?

One provocative answer - courtesy of we-do-it-our-way Singapore - is "yes". It comes in the course of a rich retrospective on issues of the Singapore media in an implicitly provocative book by the former editor of The Straits Times and former editor-in-chief of its parent media corporation Singapore Press Holdings' English and Malay Newspapers
Division .

This is oh-so easily stereotyped Singapore - that place that has said "yes" to caning and "no" to chewing gum and almost always "yes sir" to leaders.

Well, while the Western media was overdosing on its Asian stereotypes, the former British colony quietly went about its business. Today it sports one of the world's highest per capita incomes, strong public health and educational systems, internationally recognised track records for astonishingly low levels of corruption and high levels of governance efficiency. How this happened with hardly anyone in the Western media taking notice - until recently - is a telltale story that should be included in every US journalism school curriculum (but of course won't).

After all, it's rather embarrassing.

The even-keeled voice of retired editor Cheong Yip Seng is nicely pitched to tell the Singapore media story convincingly. Reflecting as it does on the life of a successful career journalist at The Straits Times, the daily with roots dating back to the 19th century, OB
Markers: My Straits Times Story recounts the sometimes rough-house relationship between Singapore's central government and the news media - but with extreme tact and understatement.

It turns out that as prime minister (1959-1990), the hard-wired Mr Lee Kuan Yew showed the same hands-on "tough love" (to put it diplomatically) towards his own media as towards international media intruders. It wasn't always pretty. The prudent journalist was careful not to stray outside the "out of bounds" (OB) markers on what the central government permitted as public discourse.

How Mr Cheong and his colleagues endured the constant threat of government crackdowns - sometimes under the uncertain threat - is a testament to their make-up. I know I could not have handled the pressure.

But then again, I am a cossetted US journalist, raised in the rosy notion of the press as a check on the power of government, happily protected from being unduly messed with by nothing less than the US Constitution. Mr Cheong never had those advantages, and yet his team produced journalism of sustained quality, despite the obvious limitation by US standards.

And so the book airs out a third way of configuring a responsible relationship between the news media and the government - and is thus a challenge to the independent "fourth estate" ideology of Western journalism.

The Singapore model of what university media professors call "developmental journalism" arose out of a combination of factors.

One was tiny Singapore's need to present a united polity in a neighbourhood that featured giant Indonesia lurking across the waters and antagonistic Malaysia hovering directly to the north. And so the news media needed to be a team player. Another was the need to globalise its economy rapidly in view of the paucity of natural resources and the relatively small size of the labour force and the local market. Within decades, it became the shining global city that it remains today. The team-player approach appears to have worked.

To be sure, the country had on its side a leader often acknowledged as a political genius. But Mr Lee was a very hard man - and he was especially hard on the news media, which needed to be pounded into partnership with the Government, even as it was permitted to retain a measure of credibility with its readers as an honest news source. And so being the top editor at the leading newspaper was a trying job indeed.

I cannot think of one top-drawer American newspaper editor who could have navigated those political waters as skilfully.

The end result is a possible Third Way for media and government that, in all intellectual honesty, should be studied with an open mind by others.

It suggests that media that are primitively hard on their governments may be missing the more important story; and that governments that regulate their media too severely may be losing an essential tool for communicating credible messages to the public.

Under proposal by Mr Cheong is the notion that getting the balance right will require a different calibration by every society - and that one media-model size definitely does not fit all.

The writer Tom Plate is a career journalist and university professor who has worked at Time magazine, the Los Angeles Times, Newsday and other media institutions. He is the author of the Giants Of Asia book series, including Conversations With Lee Kuan Yew, as well as Confessions Of An American Media Man. Straits Times courtesy via Joyo News