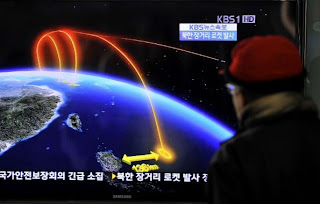 KIM JONG UN, the boyish leader of North Korea, is showing a flair for publicity stunts, albeit defiant and dangerous ones. On December 12th his tin-pot regime caught his own people and the rest of the world off-guard by firing a rocket into space and possibly putting a rudimentary satellite into orbit.

The timing, less than a week before the first anniversary of the death of his rocket-loving father, Kim Jong Il, appeared to be aimed primarily at solidifying the young Mr Kim’s leadership clique as well as bolstering his popularity among his oppressed subjects, South Korean officials said. But there were also important international ramifications.

Experts said that the same technology it takes to put a 100kg satellite into orbit could be the first step towards firing an intercontinental ballistic missile with an equivalent payload at America, provided the re-entry expertise and accuracy were good enough. American and Canadian defence officials, working together, cautiously confirmed that “the missile deployed an object that appeared to achieve orbit.” Jonathan McDowell of the Harvard-Smithsonian Centre for Astrophysics points to an object now orbiting the earth, dubbed “39026, 2012-072A”, which would appear to correspond with a new North Korean satellite.

The launch success seems to represent a significant ratcheting up of the country’s “hard power”. But it also raises the stakes in the outside world’s dealings with the rogue regime, at a time of new administrations in America and China. It comes just before elections in South Korea on December 19th. In those elections, both presidential candidates have spoken of increased engagement with the North, after a prolonged and tense standoff under South Korea’s outgoing president, Lee Myung-bak.

South Korea and Japan, which is also in the midst of an election campaign in which regional security is a serious issue, swiftly condemned the launch. America called it “a highly provocative act” that violated United Nations sanctions barring the nuclear-armed regime from carrying out ballistic-missile activities. The three countries had pressured North Korea beforehand to abandon its intentions. Even China, the regime’s strongest backer, had expressed concern about the violation of UN sanctions. It maintains that the North has the right to a space programme. But afterwards it expressed its “regret” over the rocket launch.

It is unclear how strongly the UN will react to the news. In April, when the new Kim regime conducted a failed rocket launch in defiance of international opposition, the UN Security Council issued a “presidential statement” condemning the action, strengthening sanctions on the regime, and warning of further measures if another launch were conducted. However, Beijing, which sits on the security council, is reportedly concerned that too much pressure on Pyongyang may force it to stage a third nuclear test. China-watchers say the country’s priority is ensuring stability on the Korean peninsula, and sees the denuclearisation of North Korea as only a secondary and perhaps unrealisable goal.

Some analysts believe the timing of the launch, in the run up to end-of-year holidays, may cushion some of its impact. While there is little doubt that the UN will address the matter seriously, it is also possible that a new South Korean government next year may seek to put it to one side and lead the way in trying to re-engage North Korea to pursue reforms. “This is good timing for North Korea. There are two weeks to make a fuss, and then the new year provides everyone with a chance to move on, both psychologically and politically,” said Narushige Michishita of the Tokyo-based Graduate Institute for Policy Studies.

Beforehand, news of the proposed launch was censored to North Korean citizens, possibly because of the embarrassment that ensued in April, when the previous rocket flopped in front of the world’s media. Today’s success was broadcast with startling fanfare. In contrast to the tear-choked delivery by a black-clad television announcer on December 17th 2011 that the elder Kim had died, a presenter dressed in pink robes triumphantly barked out the news of the rocket’s success.
In Pyongyang, Kyodo, a Japanese news agency, said people’s elation was tinged with surprise. Certainly it was ecstatic: "I just don't know how to express my joy about the news," a waitress gushed. "I cannot imagine how happy [the late] General Secretary Kim Jong Il will be after hearing this wonderful news."

Though North Korea had announced its space plans to the outside world, the actual news of the launch was unexpected, when it came. Only days before, North Korea had extended the timeframe for the rocket’s takeoff, due to unexplained glitches.

On December 11th, what now look like erroneous reports from South Korea had said that the Unha-3 rocket was being dismantled at the Sohae space station northwest of Pyongyang. There may have been some wishful thinking involved. Tacitly, the two siblings have been engaged in a space race ever since the North unsuccessfully sought to launch its first rocket in 1998. Then only last month the tech-savvy South failed in its third attempt to put a satellite into orbit, partly because of faulty Russian technology.

But North Korea’s crowing should be put into perspective. Even if it has put a satellite into space, experts say it is only likely to be able to send the grainiest of video images back to Pyongyang. Those pictures may simply confirm what much of the outside world already knows: that the country is so deprived of electricity it is pitch black at night, compared with the brilliant glow across South Korea, Japan and much of China. Banyan for The Economist