HAIKOU, China -- New rules announced by a Chinese province last week to allow interceptions of ships in the South China Sea are raising concerns in the region, and in Washington, that simmering disputes with Southeast Asian countries over the waters will escalate.

The move by Hainan Province, which administers China's South China Sea claims, is being seen by some analysts outside the country as another step in its bid to solidify its control of much of the sea, which includes crucial international shipping lanes through which more than a third of global trade is carried.

As foreign governments scrambled for clarification of the rules, which appeared vague and open to interpretation, a top Chinese policy maker on matters related to the South China Sea tried to calm worries inspired by the announcement. 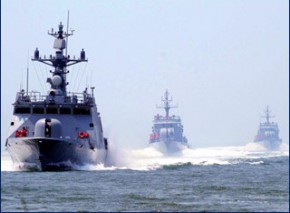 Wu Shicun, the director general of the foreign affairs office of Hainan Province, said Saturday that Chinese ships would be allowed to search and repel foreign ships only if they were engaged in illegal activities (though these were not defined) and only if the ships were within the 12-nautical-mile zone surrounding islands that China claims.

While Mr. Wu's assertions may calm some fears about possible disruptions of shipping lanes, they nonetheless suggest that China is continuing to actively press its claim to wide swaths of the sea, which includes dozens of islands that other countries say are theirs. And top Chinese officials have not yet clarified their intent, leaving room for speculation.

The laws, passed by the provincial legislature, come less than a month after China named its new leader, Xi Jinping, and as China remains embroiled in a serious dispute with Japan in the East China Sea over islands known in China as the Diaoyu and as the Senkaku in Japan.

The laws appear to have little to do with Mr. Xi directly, but they reinforce fears that China, now the owner of an aircraft carrier and a growing navy, is plowing ahead with plans to enforce its claims that it has sovereign rights over much of the sea.

If China were to enforce these new rules fully beyond the 12-mile zones, naval experts say, freedom of navigation would be at stake, a principle that benefits not only the United States and other Western powers but also China, a big importer of Middle Eastern oil.

An incomplete list of the laws passed in Hainan was announced in the state-run news agency, Xinhua, last week.

In an interview here Saturday, Mr. Wu said the new regulations applied to all of the hundreds of islands scattered across the sea, and their surrounding waters, including islands claimed by several other countries, like Vietnam and the Philippines.

"It covers all the land features inside the nine-dash line and adjacent waters," Mr. Wu said. The nine-dash line refers to a map that China drew up in the late 1940s that demarcates its territorial claims -- about 80 percent of the South China Sea.

That map forms the basis for China's current claims. Some neighboring countries were outraged when China recently placed the nine-dash map on its new passports. Vietnam has refused to place its visa stamps in the passports as they are, insisting a separate piece of paper be added for the stamp.

Mr. Wu, who also heads a government-sponsored institute devoted to the study of the South China Sea, said the immediate intention of the new laws was to deal with what he called illegal Vietnamese fishing vessels that operate in the waters around Yongxing Island, where China recently established an expanded army garrison.

The island, which has a long airstrip, is part of a group known internationally as the Paracels that is also claimed by Vietnam. China is using Yongxing Island, and its tiny city of Sansha, as a kind of forward presence in a bid for more control of the South China Sea, neighboring countries say.

The Chinese Foreign Ministry said last week that China was within its rights to allow the coast guard to board vessels in the South China Sea. "Management of the seas according to the law is a sovereign nation's legitimate right," the ministry spokesman, Hong Lei, said at a briefing.
The new rules go into effect on Jan. 1. According to a report in an English-language state-run newspaper, China Daily, the police and coast guard will be allowed to board and seize control of foreign ships that "illegally enter" Chinese waters and order them to change course.

Mr. Wu acknowledged that the new rules had aroused alarm in Asia, and the United States, because they could be interpreted as a power grab by China.

The Philippines, an ally of the United States and one of the most vociferous critics of China's claims in the South China Sea, reacted strongly to the new rules.

In a statement, the Foreign Ministry in Manila said Saturday: "This planned action by China is illegal and will validate the continuous and repeated pronouncements by the Philippines that China's claim of indisputable sovereignty over virtually the entire South China Sea is not only an excessive claim but a threat to all countries."

In order to dispel the dismay about the new rules, China needed to explain more, an American expert on the South China Sea, M. Taylor Fravel, an associate professor of political science at the Massachusetts Institute of Technology, said.

The United States and Asian nations may be overreacting to the legislation, Mr. Fravel said. "It was not passed down by Beijing as far as I can tell," he said.

"The U.S. should seek to clarify with China the intent of the regulations and whether they will be used in and around disputed islands, a move that would clearly escalate tensions," Mr. Fravel said.

At a summit meeting of Asian leaders last month in Phnom Penh, Cambodia, President Obama raised the issue of the South China Sea with Premier Wen Jiabao of China, senior administration officials said. Mr. Obama asked the Chinese to resolve disputes peacefully, and to allow freedom of navigation, a repetition of the administration's policy of the past year, they said.

But this quiet approach, encouraged by smaller Asian nations that are friendly with the United States but economically dependent on China, will no longer work, said Bonnie Glaser, an expert on Asian security at the Center for Strategic and International Studies.

She said China was confident that it could outmaneuver the 10 countries of the Association of Southeast Asian Nations, or Asean, the group that has so far unsuccessfully tried to find ways to resolve territorial disputes with China. "In Asean, there is an unwillingness to confront China, they are hopelessly divided," she said.

Until now, some Asian countries had believed that China did not want to have simultaneous conflicts on two maritime fronts: in the East China Sea with Japan and the South China Sea with other countries. With the passage of the new laws in Hainan, that assumption has now proved incorrect, Ms. Glaser said.