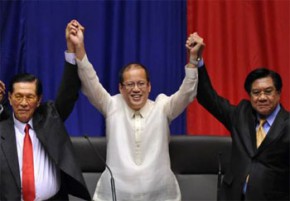 Passage is only the start. Now the legislation must be implemented

The expected passage last night by the Philippine legislature of a long-stalled birth control bill represents arguably President Benigno S. Aquino?s biggest triumph in his two and a half year reign at the head of the government in Manila.

The subject of a bitter, no-holds-barred rear-guard action on the part of the Catholic Church through the Philippine Conference of Bishops, the reproductive health measure, as it is called, has been 14 years in the making. The House of Representatives passed the bill on a healthy 133-79 margin, the Senate by a 13-8 vote.
The proposed law requires the government to provide contraceptives, information on modern family planning methods at public health centers and mandates a comprehensive reproductive health curriculum in schools. To say it is badly needed is an understatement. According to the United Nations Population Fund, half of the 3.4 million pregnancies that occur in the Philippines every year are unintended while a third are aborted, ?often in clandestine, unsafe, and unsanitary procedures by nonprofessionals,? according to Human Rights Watch, despite the fact that abortion is illegal.

When Aquino made the measure a priority, Bishop Nereo Odchimar, the head of the Catholic Bishops? Conference, said Aquino, a Catholic, could face excommunication. Despite that, Aquino said he wouldn?t change his position. After vacillating earlier during his presidential term, on Dec. 13, increasingly sure of his presidential clout, Aquino put it on the fast track for passage after a long series of parliamentary maneuvers. Accordingly, Senate President Juan Ponce Enrile said the chamber would soon pass its version of the bill over his own objections.

?My reading is that the pro-RH has the numbers,? Enrile said in an interview over local television. ?It looks like [it?s going to be approved]. It might be very close.? The House of Representatives was also expected to approve its version of the RH bill on third and final reading today. The two houses must now reconcile their versions before the bill becomes law.

The bill must be approved by this week before the Congress recesses for the holiday season.

The early betting on Aquino when he was elected to the nation?s highest office in July 2010 was that he wouldn?t make too many waves, and the reproductive health bill was one of the biggest wavemakers of all. A largely lackluster lawmaker for 12 years in the house of Representatives and the Senate, he was regarded as his mother?s son ? Corazon Aquino, who was elected president in the wake of her husband?s assassination. Cory was regarded as honest but largely ineffective as president, enduring a long series of attempted coups.

However, the president has pushed through a respectable series of measures, decisions and orders, including another historic achievement, the signing of a peace agreement with the Islamic Moro Islamic Liberation Front in October after 40 years of bloodshed that have taken an estimated 150,000 lives and stunted the economic growth of the region.

The president is also basking in a spectacular performance approval rating of +78 percent according to Pulse Asia, a respected polling firm, stemming partly from a strong economy built on healthy inward remittances from the estimated 9 million Filipinos working overseas, plus the country?s offshore business processing operations, which recently surpassed India?s to become the world?s biggest such operations. The economy grew by 7.1 percent in the third quarter, according to the National Statistical Coordination Board. It was the fastest economic expansion in Asean, with consumer spending healthy and inflation well in check.

While corruption remains a serious issue, the administration?s actions in bringing transparency to the government?s bid process in particular have endeared the country to the international investing community.

However, while the president has favorable economic winds at his back and a strong approval rating on corruption, having ousted Supreme Court Chief Justice Renato Corona and Ombudsman Merceditas Gutierrez, both allies of former president Gloria Aquino, whom he has sought to jail, he has also been helped by the growing impression of a Catholic Church that is not only out of step with its parishioners but outright corrupt.

While 81 percent of the people identify themselves as Catholic, according to the International Religious Freedom Report 2004 by the U S State Department?s Bureau of Democracy, Human Rights, and Labor, half of those who marry do so outside of their faith in civil ceremonies, or don?t wed at all, which fits with statistics that show 20 percent of the country?s births are out of wedlock. A sizeable number of priests themselves are believed to be married, in violation of their vows of chastity.

The Filipino church has faced other challenges to its image. The bishops were hit by a major scandal two years ago in the so-called ?Pajaros for Priests? episode in which members of the church hierarchy received SUVs from disgraced former President Arroyo and paid her back by supporting congressmen who thwarted impeachment bids against her.

Also, earlier this year, the Rev. Cristobal Garcia, one of the most prominent faces of the church in Cebu, was exposed as having been expelled by the Dominican order in Los Angeles after a nun told police an altar boy had been found in his bed in the rectory. Having fled back to the Philippines, Garcia has since been named a monsignor at the Society of the Angel of Peace in a village outside Cebu, where he oversees a chapel, a children?s Sunday school program and a squad of altar boys.

The fact is that contraceptive devices are used in the Philippines, but only about 23 percent of the people, and mostly by the more prosperous classes. Poorer families mostly still have several children, giving the Philippines the highest fertility rate in Asia east of Afghanistan ? an average of 3.1 births per woman of fertile age. High population growth ? 35 percent of the population is under 15 ? is often cited as the reason why per capita income growth in the Philippine has lagged far behind that of neighboring countries such as Thailand and Indonesia.

The question is what roadblocks will be put in the way of the legislation once passed. Reproductive health programs must be designed and implemented in the nation?s schools and government health facilities have to be provided with information for women on birth control, a big job in a nation whose population is veering out of control at 96 million and growing.

Enrile said the constitutionality could be questioned for violation of the protection of human life. The vast number of Catholic judges in the country probably guarantee such a constitutional challenge although the makeup of the high court, which more and more is in Aquino?s hands with Corona?s ouster and the appointment by Associate Justice Lourdes Sereno. The campaign to put contraceptives in the hands of those who need them most is just beginning. Asia Sentinel