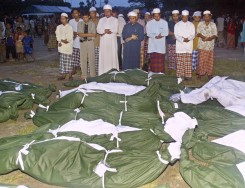 Bangkok/Brussels, 11 December 2012: After a decade of violence, the capabilities of Malay-Muslim insurgents in Thailand’s Deep South are outpacing the counter-measures of successive governments in Bangkok that have been mired in complacency and protracted national-level political disputes.

Thailand: The Evolving Conflict in the South, the latest report from the International Crisis Group, examines the evolution of the conflict and the inadequate policy responses of the past two years. Insurgents have withstood and adapted to the military’s tactics, growing more proficient and daring in the process. While there is greater pressure on leaders to reduce violence and seek a resolution, political infighting and bureaucratic inertia continue to impinge on a comprehensive approach.
“A series of insurgent attacks in 2012 thrust the conflict into national consciousness, and challenged officials’ assurances that they are on the right track”, says Matthew Wheeler, Crisis Group’s South East Asia Analyst. “But this renewed attention has not yet prompted fresh thinking or new will to tackle the problem”.

Successive governments have opted to muddle through South East Asia’s most violent internal conflict, deploying tens of thousands of security forces and spending billions of dollars to little effect. Civilian officials in the region and in the capital have been hamstrung by the need to respect military prerogatives and have searched in vain for a formula that can tamp down the violence without committing to political reforms.

The contours of a political resolution to the conflict have long been in the public domain, but Bangkok has been unable to commit to a decisive approach. The government needs to reverse the militarisation of the southernmost provinces, lift the draconian security laws and end the security forces’ impunity, all of which help stimulate the insurgency.

Thai leaders should also work to forge a broad national consensus for bold action to resolve the conflict, including decentralisation of political power, earnest engagement with a burgeoning civil society movement in the Deep South and sustained efforts to cultivate a peace dialogue with the insurgents

“As Bangkok dithers, the insurgents are growing bolder and stronger. Thailand has been fortunate that they have considered it in their strategic interest to contain the fight within their proclaimed territory”, says Jim Della-Giacoma, Crisis Group’s South East Asia Project Director. “But the violence has evolved at a pace that is starting to challenge the ability of the government to respond on its own terms. Without more creative thinking and deft action, Bangkok risks losing the initiative”.