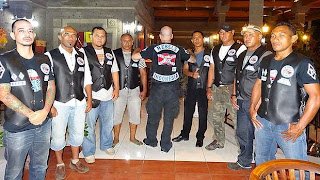 HE decor at the Heavy Duty Bar just off Bali's tourist strip is pure bike-gang chic. In the upstairs pool room, artwork of the skeleton-on-a-flaming-motorcycle school dominates one wall, and another poster reads: ''When guns are outlawed, only outlaws will have guns.'' Ned Kelly and Southern Cross images suggest an Aussie connection.

It's 10.30pm and downstairs, a few of the ''hot girls'' promised in the bar's advertising are lounging around dressed in micro-shorts and tight T-shirts. They are bored. The poles in the corners stand ready for a performance but are idle for lack of an audience. One lone customer sips his beer.
''To be honest, this is about as 'kicked-off' as it gets these days,'' says Mark Berry, the muscle-bound manager.

The HD Bar on Patih Jelantik might be too far from Kuta's main nightclub strip to do much business, but Australian police believe it signals something else - hard evidence that Australian bikies are moving in on Australia's favourite holiday island.

The bar's part owner, whose name card reads Adam ''Vigilante'' Abbott, is an outlaw motorcycle gang member from Perth. He's a patched member of Australia's biggest ''1 per cent'' gang the Rebels, which is the target of a new police crackdown called Taskforce Attero. Outlaw gang members sometime refer to themselves as ''one percenters''.

Abbott bought the bar from another Western Australian bikie, Howard ''Howie'' Wignall, a 26-year veteran member of WA's most notorious gang, the Coffin Cheaters. Both men have a penchant for guns and have served time in jail.

But theirs are not the only bike gang insignia to be seen around Bali. They are part of what police believe is a broader push by a number of outlaw gangs. The Bandidos have set up formal chapters in Bali, Bandung and Jakarta.

Earlier this year, the Australian president, Jason Addison, attended a rowdy ceremony to ''patch over'' dozens of new Indonesian members, inducting them formally into the gang. The Finks and Rock Machine are also believed to be showing interest in Bali.

Neither federal nor state police would be interviewed for this story and it is understood they have no hard evidence yet of wrongdoing. But they believe the gangs are coming to the Indonesian party island for more than the surf.

As they come under increasingly heavy police scrutiny in Australia, gangs are believed to be exploring criminal opportunities in Indonesia including money laundering, the drug trade and smuggling of various kinds.

Bali itself is a big market for drugs, particularly among the thousands of foreign tourists who land each week. Indonesia's lax laws governing the precursor chemicals used in drug manufacture mean substances such as ephedrine are widely available on the street. The mainland of Indonesia has a growing drug market both as consumer and producer.

The Australian Crime Commission reported earlier this year that, in 2010, 133 million methamphetamine tablets were seized in south-east Asia, a fourfold increase since 2008. The use of crystal meth is also on the rise and a number of very large busts, mainly of synthetic drugs, have been reported in the local press in recent months.

Earlier this year, the Australian Federal Police called a group of their Indonesian law-enforcement counterparts together in a hotel in Bali, and held an ''Outlaw Motorcycle Gang Forum'' to warn them about the potential threat to peace and public order turning up on their doorstep. But whether they do not recognise the threat, or whether they fear the impact on Bali's tourist industry if they talk about motorcycle gang activity, the Bali police are so far not prepared to say much.

''We haven't really noticed any criminal activities,'' Kuta police chief I Gede Putu Dedy Ujiana told Fairfax recently. ''Based on information from the internet, usually these groups will try to show their existence by showing their logo, but there has been none so far in Bali.''

This is not strictly true. The Bandidos, for one, have made no secret of their presence. In 2010, they held the first Bali Bike Week, attended by hundreds of gang members, many of them wearing patches. A video posted on YouTube shows a huge, three-day outdoor party featuring bands, DJs, dancing girls and drinking by hundreds of leather-clad men.

The head of the organising committee for the event, Hari Wiguna, says on the video that 600 came from Europe, Australia, Thailand, Malaysia, Singapore and other parts of Indonesia to an event that included fund-raising for local orphanages, cleaning up the beaches and planting trees in Bali's main nightclub strip, Jalan Legian.

''We are doing this to introduce our new club, the Bandidos MC, to Indonesia,'' Hari says.
The following year, ''Bandido Crispin 1 per center,'' the president of the gang's chapter in Phuket, Thailand, wrote an account of the second Bike Week celebrations, welcoming ''our European Presidente and Australian Presidente together with our Asia's Vice Presidente'' to Bali for a ''Patch Over Party … for our Indonesian Brothers who were moving up from Probationary to be proud full members in our Red & Gold Nation''.

Neither Adam Abbott nor Howard Wignall responded to requests for comments in this story, but Mark Berry at the HD Bar said it was unfair to say that either was part of a broader push by gangs. ''Howie is the only Coffin Cheater in Bali, and Adam is the only Rebel,'' he said.
However, the Facebook page for ''Rebels MC Bali'' suggests otherwise. It depicts eight Indonesians and a Western man, who may be Abbott, posing in their ''1 per cent'' leathers with Rebels patches.

Abbott and Wignall are not just any expatriates - each has a significant criminal history and a deep interest in firearms. Their adopted country has strict gun laws but these are undermined by weak enforcement and porous borders. A recent report by the UN's gun control body said the level of firearm and ammunition smuggling in Indonesia was ''high''.

Abbott's Facebook page shows him carrying a South-African army R5 assault rifle. A picture of a semi-automatic rifle is tattooed to the side of his shaven head.

At 35, Abbott has changed his name at least twice, but, as Adam Schamotta, he was described by a court in 2002 as having a ''passion for expensive firearms''.

The court convicted and sentenced him to a two-year-and-nine-month jail term on charges of obtaining money from banks by fraud and stealing as a servant. He subsequently lost his permission to hold gun licences for 10 years - a suspension reduced on appeal to five years.

Eight years later, in 2010, Abbott, who goes by the online moniker ''gingrowler'', was described on eBay feedback as a ''valued customer'' by a US-based manufacturer of gun holsters, including those used to conceal handguns. He was also a ''valued customer'' of an online hydroponics store, ''one of Australia's largest online suppliers of indoor gardening''.

Wignall owns guns and collects birds. But in 2006, he was banned by the WA State Administrative Tribunal from holding licences for his numerous guns because his membership of the Coffin Cheaters, with its history of firearms violence, meant that he was not a ''fit and proper person''. He moved to Bali about two years ago, where he has settled, marrying a Balinese woman. Wignall has a long criminal history in Australia, with 55 convictions, including for drug possession and supply. In 1992, he was jailed for 13 months for offering a $15,000 bribe to a police officer to drop an investigation of a drug offence.

During evidence to a tribunal in 2006, Wignall said the Coffin Cheaters were ''like my family''. Some people in the gang were thugs who sold and supplied drugs, he conceded, but said of them: ''There are a hell of a lot of people in my club now that I don't agree with what they do.''
In 2009, Wignall was named in the Federal Court by Tim Johnston, the disgraced chief of bankrupt business Firepower, as a stand-over man.

The Coffin Cheaters are known to have strong relationships with Perth businessman and industrial ''mediator'' John Kizon, who also has businesses in Indonesia, including with members of some of the country's politically connected oligarchs.

Wignall's links to Bali's nightlife go beyond the HD Bar. He is often seen at one of the most popular mainstream nightclubs in Kuta Legian, the Sky Garden.

At night, this multiple-storey pub and nightclub conglomerate heaves with patrons and the skimpily dressed hostesses ready to entertain them. The club recently held its ''2nd Annual VIP Schoolies Party''.

Sky Garden manager Sean McAloney denied in an email that there was any link, formal or informal, between the Coffin Cheaters or Rebels and his club. Rumours that Wignall had an ownership interest were untrue, he said - Wignall had simply been ''a loyal patron since he arrived in Bali''.

Wignall's daughter, Jade, however - who is pictured on her Facebook page aiming a pistol - is employed at the Sky Garden as the ''PR host and promotions supervisor''.

A number of sources have confirmed that the Sky Garden sacked its previous security provider, Laskar Bali (literally, Bali Army), a large and sometimes violent local group that dominates the nightclub security business in Bali. They replaced it with a group led by Jakarta gangster (or preman, literally ''free man'') Hercules Rozario Marcal, who is originally from East Timor.

About that time, in early 2011, a large fight erupted outside the club, with some antagonists carrying weapons. McAloney said the fight involved only about eight people. Asked if it was linked to the change in security contract, he said: ''I am not sure if this had anything to do with our security, as there have been many theories.''

Asked about Hercules and Laskar Bali, McAloney did not answer directly, writing instead: ''We hire security based on their CV and skill sets. Our security come from all over Indonesia (Bali, Central Java, Timor, etc) and ALL have been trained/certified by the police.''

If Australian bikies are coming to Bali to establish a criminal business, they are entering a well-established gang scene. Observers believe they will need to either fight or make alliances.
''There are just so many actors involved in Bali,'' says Dr Jacqueline Baker, a University of Wollongong political anthropologist specialising in police in south-east Asia. ''You see the Russian mafia in Bali these days. It's just such a big market. And it's a really difficult market to take on.'
'
The competition for nightclub security contracts is intense and can be a gateway to the lucrative business of dealing drugs. There is no suggestion that the Sky Garden knows of or condones drug dealing inside or outside its premises.

As for law enforcement in Bali, the Indonesian police may view Australian bikie gangs as little more than Harley-Davidson enthusiasts - a passion they have in common.

The country's Deputy Police Chief, Commissioner General Nanan Soekarna, is, controversially, the chairman of the Indonesian Harley-Davidson Club, and Baker says that because Harleys cost a large multiple of an officer's annual salary they have become a highly prized symbol of status.
''Owning one is a sign of power, which is why officers sometimes demand them in tribute as 'gifts' from corrupt businessmen,'' she says.

Australian authorities, meanwhile, are concerned about what might happen in Bali, where 2500 Australians come to holiday each week.

''Soon enough the Coffin Cheaters and Bandidos will clash on Kuta Legian over access to market and territory,'' a source said. ''The local police are completely unprepared. They have no idea where this could go, and they don't want to admit they have a potential problem.''