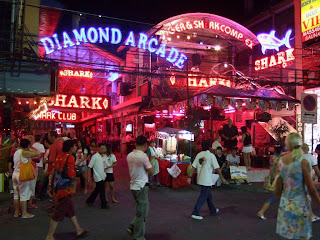 While Indonesian authorities moved this week to impose hefty consumption taxes on carbonated soft drinks in an attempt to curb a national obesity epidemic, Thailand's Public Health Ministry focused its attention on alcohol and took immediate steps to ban its sale from roadside food stalls to deter drink driving. These measures have something in common. Both are no doubt well-intentioned, but could have been better thought out. As they stand, neither is likely to achieve its objective.

Just as there are plenty of fattening alternatives to fizzy drinks, so too are there many legal outlets for alcohol. It also seems likely that quick-tempered food stall vendors will put up more resistance to loss of trade than supermarkets did three years ago when alcohol was banned from gift baskets. This sets the scene for ugly confrontations over the festive season, especially in the late night hours. It is even questionable whether police will actually enforce this measure, duplicating as it does scores of other restrictions already on the statute books but rarely acted upon. Surely we should make an effort to enforce the laws we already have before rushing to introduce new ones.

The idea of a consumption tax on fizzy drinks of the type about to be imposed by Indonesia was once popular here. It was dropped when studies questioned the effectiveness of "sin taxes" in doing anything other than swelling the size of government coffers. They have so far failed to stop people from smoking and drinking alcohol even though these are among the leading causes of premature death among Thai men and women. No one doubts the extent of our own country's obesity problem, or the role sugar plays in it, but slapping a heavy, regressive tax on one item while ignoring fat-laden fast foods, cakes, snacks, desserts, pies and ice cream would be illogical.

This is a serious and complex problem that requires thoughtful and comprehensive solutions that go beyond mere revenue enhancement. If that were the objective then a "sin tax" on sugar would make more sense. While most countries, including Thailand, have limited the availability of drinks containing more than 5% of sugar and outlawed junk food on school premises, vendors selling delicacies soaked in grease and syrups high in sugar content are always close by, as are popular fast food meeting places. Although Thai cuisine is nutritious and among the finest in the world, it takes time to prepare and today's society, of course, is one of instant gratification.

The problem is not one limited to Indonesia or Thailand. The whole world has become addicted to sugar and is leading too sweet a life. Our status as the sixth-largest producer of the commodity translates into a booming export market with high profits and plenty of growth potential.

Unfortunately, we are also the world's twelfth-largest consumer and that is a valid source of concern given the amount of time that people are physically inactive nowadays in front of a TV screen, workstation or tablet computer. All the ingredients are present for expanding waistlines and the threat of diabetes, which the World Health Organisation predicts could become this century's biggest health crisis.

The easiest way to tackle these problems is for people to demonstrate a greater sense of personal responsibility than they do at present. Failure to do so only encourages governments to intrude more deeply into the lives and activities of their citizens. It is a trend that is firmly entrenched in the West and one that is gradually becoming more noticeable among some Asean states. Bangkok Post