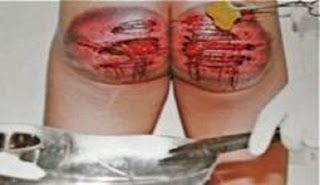 Indonesia is home to the world’s largest population of self-described faithful Muslims. More than 200 million citizens of the Asian nation embrace Islam. Indonesian Muslims have long been thought of as “moderate Muslims” and the nation is extremely proud of its inclusive, secular nature. Officially, Indonesia is not an Islamic State, but since the start of the 21st century, areas of the country are much less tolerant of other religions. Aceh Province has imposed Sharia Law on its citizens since 2001 and they utilize corporal punishment on a regular basis. This practice, which includes public caning of both sexes, finally came to the attention of the world when word spread about the brutal caning of 10 citizens in Meulaboh, West Aceh, on Wednesday for violating Shariah law with offenses including gambling and adultery.

Jhon Aswir, head of the West Aceh Public Order Agency and Shariah Police, spoke about the punishments:
“They are convicts in the cases of maisir (gambling) and khalwat (adultery), which had been processed since 2009. The caning was part of the West Aceh administration’s commitment to uphold Shariah law in Aceh.”
Muhammad Azim, one of the officials from the West Aceh Shariah Law Agency who was directly involved in the caning procession, emphasized the severity of the punishment with pride as he spoke about three of the victims who fainted from the beating.

“They collapsed and fainted, including the woman.”

The brutality of the punishment is evidenced by the photograph of one caning victim. It is truly hard and sickening to imagine the force needed to do that much damage to a person’s body with the eight or 9 strokes that each victim was given. The size of the wounds, the damage to the skin and the amount of bleeding indicate that an extreme amount of force was used. It is important to remember that this punishment is imposed on both men and women and it can lead to severe, permanent scarring.

Indonesia’s leading newspaper, The Jakarta Globe, described the public caning, which is called a “Caning Procession:”

“The caning procession was held at the yard of the Grand Baitul Makmur Mosque in Meulaboh and witnessed by thousands of residents as well as the Meulaboh district head, regional legislative council members and ulemas (Muslim legal scholars).”

The Globe also spoke about one innocent young woman who committed suicide after being arrested by the Sharia Police for attending a musical concert and was terrified of the punishment:

“A 16-year-old girl committed suicide in September after the Aceh Shariah police wrongly arrested her while she attended a music concert and accused her of committing prostitution.”

Human Rights organizations are outraged by the punishments applied only under Shariah Law, including caning, amputation of limbs, blinding, stoning for adultery and decapitation for such offenses as Witchcraft. They severly criticized the Government of Indonesia for failing once again to prosecute the parties responsible for these terrible violations of human decency and accepted worldwide standards of criminal law.