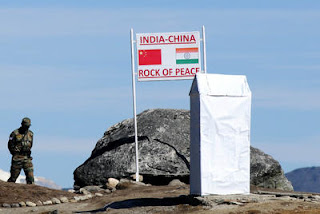 India and China are already large though transitional economies and formidable political if not yet military powers.

China has thus far out-paced India in terms of economic development but the achievement of economic take-off in India day-by-day brings their two economies close together in terms of trade and investment flows despite the underdeveloped transport infrastructure across the back of Asia — a gap that, among others, prevents the fact of geographic proximity from welding these two emerging powers even more closely together.

India and China both have many problems at home that encourage overwhelming preoccupation with domestic economic and political affairs. Their growing relative power has seen them both cast as potential strategic competitors. There are American political leaders and strategists who argue for sharply divergent approaches toward China and India, a fashion that caught brief favour in countries like Japan and Australia (where it lingers in the tenuous idea of an Indo-Pacific strategy).

These are two powers with common borders, each with its own vulnerabilities, and both with baggage from the history of the Sino–Indian conflict of 1962. There are, of course, noisy protagonists on both sides who hark back to the past and reflect the instinct for hostility. Yet the most powerful fact about their relationship today is that they are inexorably becoming increasingly economically complementary and there is little evidence in their thinking or behaviour that plays strongly to the past. As China and India share growing interests and objectives in global governance, the need to deal with each other’s growing power in their own Asian space grows too.

The economics are driving India and China closer together — not further apart. China is becoming a larger and larger economic partner for India. China’s and India’s political and strategic interests do not appear to be quite so differently aligned vis-à-vis those of the US or on many other issues as some might imagine or wish.

As Rupakjyoti Borah writes: ‘The run-up to the [recent East Asia Summit], held in Phnom Penh on 20 November, was marked by a series of territorial disputes between China and countries like Japan, Vietnam and the Philippines.’ But for India, the priority continues to be closer economic ties. Prime Minister Manmohan Singh emphasised that ‘for India, ASEAN has been the bridge to the East’. Significantly Singh also stressed the need to improve connectivity between the member countries of the EAS and called for the implementation of the EAS Declaration on ASEAN Connectivity, which was adopted at the last summit in Bali, Indonesia. With Myanmar’s opening up, the missing link in this bridge between Southeast Asia and China on the mainland of Asia can be closed. All this is affirmation of India’s ‘look east’ strategy.

In China, there is growing weight behind a ‘look west’ strategy that gives primacy to India. ‘The Americans are looking towards East and we look towards the West,’ Wang Jisi, a leading Chinese strategist and major player in re-thinking Sino–Indian relations over the 1962 war, declared recently.

‘Some people may make the argument that we should support Pakistan because of India but actually the motivations are not mainly driven by that,’ Professor Wang said. ‘If we look to the west and China’s strategic influence, we have great economic and strategic potential in that region’, he observed. Chinese bilateral trade with India has grown from a few billion to US$74 billion, with China now India’s biggest trade partner. Chinese investments in India are worth more than US$55 billion.

In this week’s lead essay, Sourabh Gupta reviews the approach to the upcoming Sino–Indian talks in Beijing over boundary issues almost 50 years to the day that the People’s Liberation Army commenced a unilateral withdrawal from territories captured in the Assam Himalayas after inflicting a punishing defeat on Indian positions. Menon and his counterpart, Dai Bingguo, are expected to lay out a joint record of the progress achieved in the 15 rounds of special representative-level talks conducted since 2003.

The prospects for a ‘package-based’ framework to resolve the boundary dispute will continue in Beijing. While there are issues to resolve, the spirit with which they are being conducted is symbolic of a tone in India–China relations that underlines their growing mutual interests. Author: Peter Drysdale, Editor, East Asia Forum