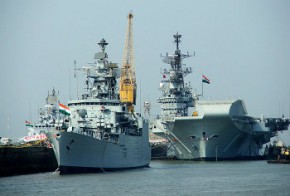 Navy chief's threat to send forces if need be complicates an already tense situation
Indian Navy Chief Admiral D.K. Joshi's recent comment that India will protect its interests in the South China Sea by "sending forces" if need be, has created consternation in the region and added to the tensions generated by the countries already laying claim to various parts of the sea.

"When the requirement is there, for example, in situations where our country's interests are involved...we will be required to go there and we are prepared for that," Joshi told a news conference. "Now, are we preparing for it? Are we having exercises of that nature? The short answer is yes."

The admiral's statements are regarded as an expression of Delhi's newfound resolve to act as a serious regional 'balancer' and underscores a growing appetite to expand its footprint in a region that hitherto has been viewed as outside its core interests. At the moment, the equation between the two navies is vastly in China's favor, with the Indian navy possessing140-plus warships compared with 750 for the Chinese, whose navy is not only far bigger but more sophisticated.

"The South China Sea is Asia's most politically volatile spot, said political scientist Vipin Bhambri of Jawaharlal Nehru University. "It is also rich in oil and gas - and more than half the world's oil-tanker traffic passes through it. The region's salience makes it tough for Asian nations to overlook any frisson of development in its waters,"

China has reacted with uncharacteristic reserve. Asked about Admiral Joshi's comments this week, a spokesperson for China's Foreign Ministry told the media, "China opposes unilateral oil and gas development in disputed waters of the South China Sea. We hope that concerned countries respect China's position and rights, and respect efforts made through bilateral talks to resolve disputes."

Despite this veneer of restraint, however, there's no denying that regional dynamics are increasingly complicated in the area with parts of South China Sea also being claimed by the Philippines, Vietnam, Brunei, Malaysia and Taiwan. Against this backdrop, China's recent decision to empower the police in the Hainan province, which administers the South China Sea for China, to intercept foreign ships and seize vessels in sea's disputed waters from 1 January has considerably ratcheted up the tension. According to the rules, the police can take necessary measures to stop international ships or "to force them into changing or reversing course."

It is in the disputed waters of Hainan province where India's interest lie. India's ONGC Videsh Ltd has been given the oil block number 128 by Vietnam for joint exploration. ONGC Videsh has three offshore deepwater blocks on the southern Vietnamese coast, and has invested US$600 million in oil and gas exploration in them. ONGC Videsh has operations in 15 countries, where it is engaged in exploration work on 31 projects.

"The Hainan move is another step in China's bid to strengthen its hold over much of the sea, which includes crucial international shipping routes which see enormous global trade activity," a senior official at the Ministry of Defense told Asia Sentinel.

These developments are also being viewed against the backdrop of already simmering discontent between Beijing and Delhi, which signed an agreement with Vietnam in October 2011 to expand and promote oil exploration in the sea and reconfirmed its decision to carry on despite the Chinese challenge to India's presence on the waters. China has also been locked in a series of disputes over strategic islands in the region, including with Vietnam and the Philippines over the Spratly and Paracel islet chains.

Against these developments, any display of naval assertiveness by India in the South China Sea would fuel concern that the navies of the two rapidly growing nations are fighting for more control over the sea.

China is viewing India growing engagement in East and South-east Asia with suspicion, issuing a diplomatic protest to India in November 2011, underlining that its permission should be sought for exploration in the two blocks and that without it, ONGC's activities would be considered 'illegal'. Vietnam, meanwhile underlined the 1982 UN Convention on the Law of the Sea to claim its sovereign rights over the two blocks being explored.

India decided to go by Vietnam's claims and ignore China's objections. China has since been objecting to the Indian exploration projects, claiming that the territory comes under its sovereignty. India continues to maintain that its exploration projects in the region are purely commercial.

India, the third largest economy in Asia, is the fourth biggest spender on defense in the Indo-Pacific after the United States, China and Japan. To prevent further escalation of tension in an already fraught region, analysts advise that Delhi urgently articulate when and under what conditions would it be willing to use its military assets.

This is also vital because The Eastern Naval Command – which governs India's eastern seaboard and is likely to play a key role when the Navy is deployed in South China Sea – is being reinforced.

Ironically, despite growing economic engagement between Beijing and Delhi (bilateral trade is set to touch US$100 billion by 2015), political tensions have only intensified between the two Asian neighbors, especially in the Indian and Pacific Oceans. Analysts trace the hostility back to 1962 when the two fought a bloody war.

With their growing and globalized economies, China and India will increasingly be relying on the seas to fulfill their trade and maritime ambitions. Both are building large navies too. According to a Defense Ministry source, the Indian Navy has fortified itself with as many as 15 ships over the last three years. This includes a leasedAkulla II class nuclear submarine from Russia. Delhi will also soon take delivery of the much-delayed Russian aircraft carrier retrofitted for Indian use, the INS Vikramaditya. Other ships include three "stealth" frigates of the Shivalik class, resupply tankers and fast attack boats.

Against this complex backdrop, it can only be hoped that India and China act with restraint rather than indulge in any impulsive action that may threaten regional geopolitical peace and stability.