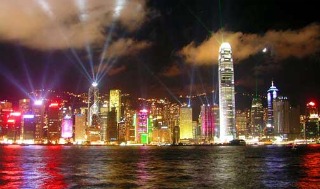 The wave of liquidity unleashed by US Federal Reserve Chairman Ben Bernanke and mimicked by central banks in Japan and the Eurozone is causing serious problems for the Hong Kong Monetary Authority, the territory's de facto central bank.

The HKMA has been working feverishly for weeks to cope with the vast amounts of hot money flowing into the territory, with little success as officials struggle for answers. With demand high from international traders for Hong Kong dollars, the HKMA is having to print billions to maintain the historic peg to the US dollar.

The Hong Kong dollar, which has been held at around HK$7.8 to the US dollar since 1983, has come under particular threat, with the HKMA having to intervene in the currency markets, selling HK$4.42 billion (US$570.3 million) in local dollars as the currency hit the top of its trading range on Tuesday alone.

Repeated forex interventions by the HKMA in the open market since Oct. 24 have pushed the aggregate balance of the HKMA (orange line in the chart above) up nearly HK$100 bn to HK$242 bn as of Tuesday. Before this, the balance had remained at around HK$149 bn for more than two years straight. Given the government's heavy crackdown on speculation in the local property market by non-permanent residents, the stock market has become the favored punting ground for the current gush of foreign inflows.

The one-way surge in HKMA's aggregate balance since late-October is starting to resemble the previous jump that occurred between late-2008 and late-2009. In particular its tight correlation to the Hang Seng Index (depicted by the white line on the Bloomberg chart below) offers a brilliant trading indicator to pick major turning points for the Hong Kong market. Four years ago, foreign capital stormed Hong Kong in three large waves. The magnitude for each upsurge of inflows was roughly HK$170 billion, HK$140 billion and HK$140 billion, respectively. Compare that with the current HK$100 bn of inflows caught by the HKMA, suggesting the Hang Seng has more room to run.

The resultant liquidity is creating asset inflation on a major scale, combined with the influx of as many as 27 million mainland tourists a year who see the city as a shopping mecca. Shop rents have skyrocketed, putting many longtime local stores out of business as landlords seek higher-margin tenants.

"The current situation is something we have never experienced before," Norman Chan, the head of the HKMA, told local media. “Since the outlook for the macroeconomic and financial environment is very uncertain, it is highly possible we will continue to see large fund inflows and outflows as well as sharp fluctuations in the financial markets," Chan told local reporters.

"Therefore, I would like to ask everyone to stay alert to the risks ahead and be aware the current environment is highly abnormal and uncertain. We should all take precautionary measures and … avoid overstretching ourselves. Otherwise, we may find ourselves being trapped in the debt abyss with no way out."

The big question is what happens when the tide goes out, as eventually it must. Property frenzy in the run-up to the handover of the territory to China broke in 1997, with residential property prices falling for seven straight years. They have only recently returned to pre-1997 levels.

With real interest rates near zero, virtually every asset class has been caught in the frenzy, raising concerns about bubbles and also raising increasing concerns about inflation, which rose to 3.8 percent in November on rising rents and the US fed's quantitative easing actions.

Hong Kong Central is now the world's most expensive business location, having surpassed both London and Tokyo this year. The residential market has risen by 15 percent in 2012 and is surging again on panic buying despite measures by the government to put a 15 percent tall wall in the form of a 15 stamp duty on purchases by foreign buyers.

With the residential market was partly shut down, investors have diverted their money into carparks. Residents of apartment blocks in Central and other areas are being besieged by real estate agents to sell their simple eight-foot spaces for HK$650,00 and up. One acquaintance bought a car park in the Mid-levels area for nearly HK$1 million. Car parks now cost more than most cars themselves except for the luxury ones.

It's hard for prospective homebuyers to keep waiting on the sideline and trust that Chief Executive CY Leung will succeed in pushing down home when the city's speculators know somebody is making money out there with the continuous climb in the Hang Seng, the city's broad stock market. Now at 22,652 – near its 52-week high -- appearing to be headed for 25,000.

It will always be the case that the higher it climbs, the harder it falls. Adding liquidity without commensurate productivity increase gets us nowhere. But the problem is that Hong Kong is a property town run by a surveyor – Leung, and so far, there has been no pressure to rein in the property oligarchs, who continue to fill their boots. By Steve Wang economist for REORIENT Securities Ltd. In Hong Kong