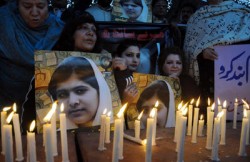 In October, the Taliban shooting of Pakistani schoolgirl Malala Yousafzai for her advocacy of female education led many Pakistan watchers to ask: ‘will this be a turning point against extremism in Pakistan?’

In short, the answer is ‘no’ — despite the fact that Malala was ranked sixth in Foreign Policy Magazine’s Top Global Thinkers 2012, ahead of Barack Obama. The barbaric act was condemned broadly in Pakistan and sparked large rallies in support of Malala and her fight for female education. But there has been no unified, galvanising force to pressure the Pakistani government or military into cracking down on extremists, or any signs that extremism, justified by religion or ideology, is abating.

First, there is no national consensus in Pakistan about how to deal with domestic terrorism. Following the shooting, President Asif Ali Zardari proposed a resolution calling for ‘practical measures’ in response to the attack. The opposition party opposed the resolution, demanding proof that earlier military actions against extremism had not weakened the country. This lack of bipartisan support to reduce extremism is alarming.

Second, following the attack on Malala, analysts are heralding an opportunity for civil society to make a real difference. Ahmed Rashid, a Pakistani author and journalist, argues that ‘her [Malala’s] story now has the potential, if fully utilized, to bring about a serious geo-political change in the region that could actually help stabilize both Pakistan and Afghanistan’.

It is true that Pakistani civil society is gaining in numbers and strength and has had success in certain areas of advocacy, such as education and health. But Rashid oversells the potential effects. The reality is that civil society has very little sway over the institutions able to address extremism in Pakistan: the military and intelligence services. The Inter-Services Intelligence agency and the military are accused of covertly supporting extremist networks in Pakistan for use in proxy wars in India and Afghanistan, and the military establishment is not accountable to the government or the public. This will make it difficult for civil society to make any substantive difference in fighting extremism.

Third, the scourge of extremism has continued to bite in Pakistan even after the attack on Malala. Sectarian attacks intensified during Ashura in late November, a holy festival for Shiite Muslims. Many people were killed and injured in Karachi, Rawalpindi and other cities when extremists attacked Shiite religious processions. Government efforts to thwart attacks included the blackout of mobile phone services in Karachi and Quetta and the banning of motorcycles (a bomber’s transport of choice) near Ashura processions. Yet these short-term measures will not fix the broader problem of sectarian violence in Pakistan. About 459 people have been killed in 155 sectarian attacks in Pakistan this year, mostly against Shiites at the hand of Sunni Muslims.
Despite escalating violence and disquiet among religious groups, and the increasing use of the blasphemy laws to persecute Christians and other religious minorities, there is no national consensus or conversation on how to deal with terrorism.

However, there are glimmers of hope. On 28 November, the government moved to create a more powerful counterterrorism authority, which would have a sweeping mandate to examine school syllabus and textbook issues pertaining to the spread of hate material and propaganda. Yet, given the government already has a National Counter Terrorism Authority (established in 2008), it is difficult to imagine sweeping changes and policy overhaul in the counterterrorism space as a result of this latest development.

Finally, what about the ‘covert’ extremism that reaches far and wide throughout Pakistani society? Almost every day there are stories of women (and men) who are killed for ‘dishonouring’ their families. Amnesty International reported in 2010 that 960 women were killed for ‘honour’ in Pakistan, and in September 2010 Punjab’s law minister stated that crimes against women would be tried under Pakistan’s Anti-Terrorism Act. This kind of violence, most frequently against women, should be intolerable and heavily condemned by the Pakistani government, yet it is only in high-profile cases like the Malala Yousafzai shooting that the government is willing to publicly speak out against extremism.

The government must begin to forcefully condemn all forms of extremism in Pakistan. But this isn’t as easy as it sounds. Many politicians condemned the attack on Malala without actually condemning the Taliban. Politicians are continually trying to prove their religious credentials to appeal to an increasingly conservative population and influential religious parties. A key example of this was the government’s declaration of a ‘day of love for the Prophet’ in response to the YouTube video that much of the Muslim world believes insulted Islam. The public holiday was meant to allow Pakistanis to ‘peacefully protest’ the video; it resulted in riots leaving many dead or injured and millions of dollars worth of damages to public property.

Until all kinds of extremism are addressed as part of a national dialogue, it is difficult to see how attitudes toward extremism and violence will change in Pakistan.

Alicia Mollaun is a PhD candidate at the Crawford School of Public Policy, the Australian National University, and is based in Islamabad.