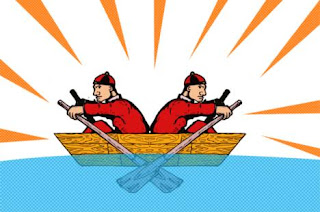 ‘China has devolved into competing centers of power, with bureaucrats and generals vying to out-do one another with nationalistic posturing.'

The growing tension in East Asia over China’s aggressive claims to the region’s oil-rich waters — now delineated on maps in Chinese passports — may suggest a meticulously calculated plan by Beijing to propel the country to superpower status. The reality may be more mundane — lack of coordination and bureaucratic infighting.

China is determined to erase a century and a half of humiliation by Western colonialists and Japanese occupiers. But without a strong leader who imposes policy from above, the country has devolved into competing centers of power at the national and provincial levels, with bureaucrats and generals dividing into factions, vying to outdo one another with nationalistic posturing.

The result of this policy dissonance, as seen in the territorial disputes surrounding islands in the East China Sea and the South China Sea, appears counterproductive to China’s long-term interests. Beijing has failed to win legal arguments over control of the islands, but antagonized most of its Asian neighbors and provoked the United States to focus more naval power on the seas off China’s coastline.

China disputes control of the Diaoyu Islands in the East China Sea with Japan, which calls them the Senkakus. Beijing also claims a huge U-shaped swathe of the South China Sea, denoted by a sketched dotted line, first submitted to the United Nations in 2009. That interpretation is strongly contested by Vietnam, the Philippines, Malaysia and Brunei who have rival claims.

China has two goals. The first is to expand its access to oil and gas reserves in disputed areas. The state-owned oil company CNOOC already pumps about one third of its total oil and gas production worldwide from undisputed parts of South China Sea and East China Sea. If China took all the South China Sea oilfields, China’s Ministry of Land and Resources estimates that would satisfy China’s needs for 50 years — an attractive lure for an energy-hungry economy, the second-largest in the world.

At the same time, for decades, the Chinese military has wanted to establish the so-called “first island chain” of defense — a doctrine under which China would seek to secure the Yellow Sea, East China Sea and South China Sea along a line of islands from Sakhalin through Japan, Okinawa and Taiwan down to Borneo, and deny access to aircraft carrier groups and military bases of the United States — or other rival forces, including India. To this end China has constructed military outposts on reefs and rocky outcrops of disputed islands, outfitting them with helipads, naval guns, radar and satellite communications and even rudimentary airstrips.

For 30 years China avoided major conflict by keeping outpost-building at a low level, while simultaneously engaging in largely nonproductive territorial negotiations with neighbors.

As China weathered the 2008 recession more successfully than the United States or Europe, some factions argued that the time had come for Beijing to flex its muscles internationally. The low-key “bide and hide” strategy of Deng Xiaoping was abruptly pushed aside. Chinese ships became more aggressive in disputed waters off its coast. In 2009 five Chinese vessels came dangerously close to a US ocean surveillance ship in the South China Sea, and in 2010 a Chinese trawler collided with two Japanese Coast Guard ships near the disputed Diaoyu/Senkaku islands, leading to anti-Japanese riots across China.

China’s diplomatic rhetoric also became more strident. When US Secretary of State Hillary Clinton expressed support for freedom of navigation in the South China Sea at a July 2010 meeting in Hanoi, China’s Foreign Minister Yang Jiechi described the remarks as “an attack on China.” He subsequently dismissed a Singaporean minister with the words: “China is a big country and other countries are small countries, and that’s just a fact.” Those words have been cited, with some bitterness, across Asia since.

Other countries in this dispute became more incensed upon realizing that China’s new generation of passports first issued this spring contain maps showing the South China Sea as a Chinese possession. In protest, Vietnam and the Philippines announced they would no longer stamp Chinese passports with visas, but instead insert a separate visa form.

Last week, in another sign of uncoordinated policymaking, the provincial government of the southern island of Hainan passed laws authorizing the Chinese Coast Guard to board foreign ships entering waters claimed by China in the South China Sea and force them to change course. The Philippines immediately protested the laws, which appeared locally written and not handed down by Beijing, as “a threat to all countries.”

To be sure, as protests risked getting out of control, more moderate officials in China have stepped in to calm tempers. Others, like veteran diplomat Dai Binguo, have sought to tone down the Foreign Ministry rhetoric. But the perception that China is overbearing has already taken hold among many of its neighbors who line up to petition the US to reassert its influence in the region.

Much to Beijing’s displeasure, the US has responded, basing Marines in Australia, sending naval ships to visit Vietnam’s Cam Ranh Bay and negotiating a renewed presence of US forces in the Philippines. President Barack Obama’s recent Asia trip included two countries, Myanmar and Cambodia, both of which China had long treated as client states.

The US is not alone in wooing China’s neighbors. India is, too, after Chinese vessels challenged Indian ships in the South China Sea and China sought to block an Indian oil company from signing an oil exploration deal with Vietnam. India has joined the list of countries agitating for freedom of navigation through heavily-sailed trade routes in the South China Sea. Japan has for the first time since World War II begun giving military aid to some neighbors, and is negotiating with Vietnam and Philippines to donate Coast Guard ships.

China’s power will inevitably continue to rise in Asia. The question is whether Beijing can manage this without making itself the regional boogeyman. There is a structural problem. Uniquely among large powers, China has no national security council, as pointed out by Richard Solomon, former US Assistant Secretary of State for East Asia — no body where military, intelligence, diplomatic and economic experts can jointly formulate policy in sensitive international situations.

The level of civilian control over the People’s Liberation Army is obscure, at best. In 2011, for example, during a visit to Beijing by then-US Defense Secretary Robert Gates, the Chinese military carried out the first test flight of a new stealth fighter — apparently without telling then-President Hu Jintao in advance, who seemed embarrassed when Gates had questions. In the Communist Party hierarchy there are two PLA representatives on the 25-member Politburo and none on the elite seven-member Standing Committee. If China had its own security council, there would be more information exchange and policy coordination among the various civilian and military agencies — and less chance of either premature military actions or nationalist rhetoric incompatible with China’s longer-term goals.

The greatest danger in the South China Sea and East China Sea is not some meticulously planned campaign by China to subdue neighbors, but an inadvertent crisis caused by overzealous officials operating in a policy vacuum. That is the truly scary scenario.

Terry McCarthy is president and CEO of the Los Angeles World Affairs Council.