Vietnam’s War on the Blogosphere 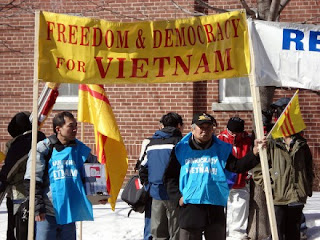 Despite growing ties with the U.S., a recent self-immolation in Hanoi was emblematic of the country's deteriorating human rights situation and attacks on free speech.

On July 30 Dang Thi Kim Lieng set herself on fire outside the Bac Lieu People’s Committee building in southern Vietnam. She died of her injuries en route to hospital. Lieng, who was 64, was protesting the detention of her daughter Ta Phong Tan, who was arrested September 30 last year and was due to go to trial August 7. At the time of publication, the hearing has been postponed indefinitely.

Tan, along with Phan Thanh Hai and Nguyen Van Hai, better known as “Dieu Cay,” was a member of the Free Journalists Club, an unsanctioned group pushing freedom of speech in Vietnam. Without the relevant government permission needed to form their group it was deemed illegal.

The three bloggers are scheduled be tried under section 88 of the criminal code, which relates to propaganda against the state. A maximum sentence could carry with it 20 years in prison, though most bloggers tried receive lower sentences.

It’s the latest in a string of arrests of bloggers and other dissidents. According to Human Rights Watch ten activists have been sentenced this year.

This year, as in previous ones, much has been said about human rights in Vietnam. Generally the cases that draw the most attention are those of dissidents expressing opinions about the government. Sometimes cases of repression based on creed or ethnicity also make headlines.

The U.S. has a strong and organized Vietnamese community – many of whose older members fled the communists. They hold enough political clout that representatives, such as Rep. Loretta Sanchez in California, regularly pushes for Vietnam to make human rights a priority.

On July 25, Stanford law school’s Alan Weiner tabled a petition to the United Nations about the arbitrary detention of 17 activists from the Catholic Redemptionist Church in Vietnam.

However no matter the amount of pressure applied and the number of statements issued, the situation in Vietnam has not improved. Weiner calls it “a growing pattern of human rights abuses”  in a press release sent to media.

In fact, the decline dates back to 2008 when press freedom was curtailed after two reporters were arrested for their reporting on the well-known PMU18 case, when, in 2006, some Party officials were found to be gambling vast sums of Japanese and World Bank aid money on football matches.

That was the same year a new blog law came into force officially banning bloggers from touching anything political.  “The Diplomat”
Posted by Kerry B. Collison at 3:09 PM