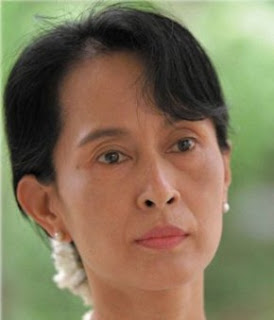 Despite calls for her to speak out, the Burmese opposition politician is keeping a low-profile on the continued persecution of minorities in her country.

When Hillary Clinton meets Aung San Suu Kyi again—it is unlikely that the Burmese opposition leader’s visit to the U.S. next month will pass without a tête-a-tête between these two soul sisters—the secretary of state would be forgiven for saying, “I told you so.”

It was at the Women in the World summit in New York in the spring (an event hosted by Newsweek/Daily Beast) that the secretary of state described the passage Suu Kyi was then making from adored icon of democracy to practical politician. “I know that route,” she said, and “how hard it is to balance one’s ideals and aspirations” with the demands of real politics.

Suu Kyi duly won election and was swept into parliament with 42 party colleagues. And within a couple of months her halo had cracked.

Estimates of how long the Rohingyas have lived in Burma vary from many centuries to a couple of generations; what is beyond dispute is that, in a country with more than 130 minorities, many of them long-term victims of state terrorism, the Rohingyas are uniquely ill-favored: barred from citizenship and required to have permission to travel, to marry, and to have more than two children.

One would have expected Aung San Suu Kyi, one of the world’s most eloquent exponents of human rights, to leap to their defense. Indeed, when she visited Britain in June, U.K. Foreign Secretary, William Hague, urged her to take a proactive role in seeking reconciliation between the Rohingyas and the Burmans who constitute some two thirds of the population. And last week a senior British minister gave voice to his disappointment at her failure to do so. “Frankly I would expect her to provide moral leadership on this subject,” he told The Independent, “but she hasn’t really spoken about it at al l... [Speaking out] is the right thing to do.”
Her problem, as the minister well knows—“It might be politically difficult for her to take a supportive stance towards the Rohingyas,” he conceded—is that she is now in a new game, which requires the skills of a juggler.

She is the de facto leader of the opposition in a Parliament in which the proxy party of the military, the Union Solidarity and Development Party, has a large majority. She and her colleagues are determined to reform a constitution which was written by the generals and guarantees their hegemony for ever. She has an ally in the head of state, President Thein Sein, who this week demonstrated his continuing commitment to reform by scrapping pre-publication press censorship; she has had two meetings with him in the past fortnight—no details were released—and has been made the chair of a newly established committee to oversee improvements in the rule of law.

It is only when you are wandering in the wilderness of dissent that you can be everybody’s darling.

So far, so encouraging. But these are baby steps. The goal is the year 2015, when the next general elections are scheduled. If they are run in a correct manner, Suu Kyi and the party she heads, the National League for Democracy, should, judging from April’s by-election results, win a landslide victory.

But that depends on Suu Kyi retaining the overwhelming support of the Burmese. Maung Zarni, one of Burma’s most trenchant commentators, said, “Politically Aung San Suu Kyi has absolutely nothing to gain from opening her mouth on [the Rohingyas]. She is no longer a political dissident ... She’s a politician, and her eyes are fixed on the prize, which is the 2015 majority Buddhist vote.”
It is only when you are wandering in the wilderness of dissent that you can be everybody’s darling, as Clinton could tell her. Once inside the tent, you must choose when to open your mouth and when to keep it zipped.

It is likely that her enemies in the military put her in this predicament deliberately, coldly calculating the damage it would do her: the unrest broke out in early June, on the eve of her trip to Europe. Bertil Lintner, the Swedish journalist and veteran Burma-watcher, remarked at the time, “The violence is clearly well-orchestrated and not as spontaneous as we are being led to believe.

The [Burmese] government is very worried about the support commanded by Suu Kyi. It wants to force her into a position where she has to make a pro-Rohingya public statement that could damage her popularity among Burma’s Buddhists, where anti-Muslim sentiment runs high. On the other hand, if she remains silent she will disappoint those who support her firm stand on human rights.”

The disappointment has duly registered. Clearly Suu Kyi can live with it. Her eyes are on the prize. By Peter Popham for The Daily Beast