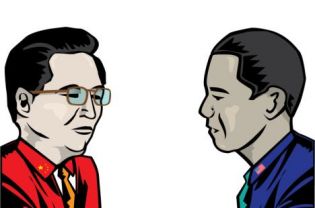 The US and Asia are at odds again this week. The contest this time is not a political or diplomatic one between China and the US, but a battle of ideas between two very different cultures.

There is a lot more than meets the eye in the US verdict last week that found that South Korean electronics giant Samsung infringed on Apple’s technology patents to make its own smartphones and computer tablets. Behind this contest has been a battle of wits as well as a cross-continental clash of entrepreneurial cultures.

As the Apple vs Samsung case reveals, American firms are the leading developers of technology, while Korean companies are the innovators. Asian firms are good at innovating and can improvise on any product invented in America to make them much better and less expensively. The Japanese have done this consistently since the 1970s in the area of automobiles and electronic goods.

Korea, through Samsung, among other firms, is now making similar innovations with high-tech products. Samsung’s market share rivals that of Apple in the smartphone and tablet markets in the US and globally. Apple’s decision to fight the Samsung challenge by defending its intellectual property rights through litigation will only delay the inevitable. History has shown that, sooner or later, Asian firms will tear apart any new product developed by the US — and will improvise.

There is something, however, that Asians cannot replicate now, nor will be we able to in the foreseeable future: The business of inventing. Success in that endeavor is based on traditions and values that combine entrepreneurship, freedom of inquiry and a willingness to experiment and sustain losses. This is what has given the US its leading edge in technology and sustained it globally for the past century or so.

Asians don’t regard freedom as highly as do Americans. They assign more value to Confucian values such as discipline and harmony, which are good for innovation but do not encourage the risk taking needed for creative breakthroughs. Universities in the US may be on the decline but continue to draw some of the best minds in Asia precisely because of their long-held tradition of academic freedom.

The only way for Asia to catch up is to promote freedom, including the freedom of inquiry, all around , and especially at its universities and their societies. Otherwise, Asia will remain comprised of nations of innovators, which is perhaps only a slightly more respectable way to say they will be comprised of pirates of ideas. The Jakarta Post Editorial