Politicising the Senkaku Islands a danger to regional stability 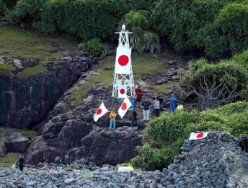 Tensions between Japan and China surrounding the Senkaku Islands have flared again.

In April, Tokyo Governor Shintaro Ishihara declared his intention to use Tokyo Metropolitan Government funds to purchase three islands of the five-island chain from their private landowner to protect them from China. Predictably, his statements invoked protests from China and Taiwan, which also claim sovereignty over the islands. Subsequently, donors in Japan contributed over ¥1.3 billion (US$16 million) to a fund for Tokyo to purchase the islands, essentially forcing the central government’s hand and pushing it to take control. In July, Japanese Prime Minister Yoshihiko Noda declared that the Japanese central government itself would purchase and nationalise the Senkaku Islands in order to maintain them in a stable and peaceful manner. Unsurprisingly, Noda’s statement also drew criticism from China and Taiwan.

While US statements reconfirming that the Senkaku Islands are covered by the US−Japan Security Treaty — most recently by US Secretary of State Hillary Clinton in 2010 — have been warmly welcomed by Tokyo, it will be important that the US maintain a clear stance on the issue going forward.

The US−Japan Security Treaty commits the US to defending Japan. In return, Japan provides military bases in its territory for the US, not just for the defence of Japan but also for the maintenance of international peace in the Far East. This arrangement has been of mutual benefit, keeping Japan secure while also being indispensable to the US forward-deployment strategy. Any failure or perceived weakness in the US commitment to defend Japan, including the Senkaku Islands, would undermine the US−Japan Security Treaty and the foundation of the alliance.

Since 2010, there has been a change in China’s approach to the Senkaku Islands. In September of that year, China responded harshly to Japan’s arrest of a Chinese fishing boat captain who rammed two Japan Coast Guard ships near the Senkaku Islands. The Chinese government upped the ante with a unilateral response that included arresting four Japanese employees of Fujita Corporation (who were based in China) for photographing military facilities, cancelling large-scale tourist trips between China and Japan, and suspending rare-earth exports to Japan. Some Chinese officials have said that protecting China’s territory is a core interest, implying a willingness to use military force in the dispute over the Senkaku Islands. This represents a serious departure from the approach espoused by Deng Xiaoping — which had been China’s de facto policy — of shelving the issue for future generations. A broader shift in Chinese behaviour is also evident in its increasingly assertive posture toward freedom of navigation issues and territorial disputes in the South China Sea.

The way in which the US and Japan respond to China’s increasingly assertive posture over the Senkakus can be seen as a litmus test for the US pivot to Asia and will have spillover effects as the region grapples with the rise of China. For this reason, US−Japan consultations should also include the broader subject of how to best work together to enhance military confidence with China.

In Japan, public opinion polls indicate that nearly 70 per cent of the population is in favour of Ishihara’s proposal for the Tokyo government to buy the Senkakus. This support may have been based on a simplistic understanding of the issue as respondents even cited farfetched concerns that the private owner could have sold the islands to China.

Japan already has effective control of the Senkaku Islands, which have been on lease to the central government for the past 10 years. The plan to nationalise the islands — instead of allowing them to be purchased by the Tokyo government — is consistent with Japan’s established policy of maintaining control of the Senkakus in a low-key manner. At the same time the Japanese government has further to go so as to minimise nationalistic confrontation with China by providing a full explanation of its intentions on Senkaku policy.

Hitoshi Tanaka is Senior Fellow at the Japan Center for International Exchange and Chairman of the Institute for International Strategy at the Japan Research Institute. He previously served as Japan’s deputy minister for foreign affairs. A version of this article first appeared in JCIE’s East Asia Insights Vol. 7 No. 3 August 2012. East Asia Forum