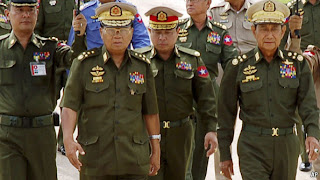 Last week's announcement by Myanmar's information ministry that it had abolished direct media censorship was hailed by observers as yet more evidence that the process of reform is well under way.

And now that Western sanctions are being relaxed, it is also opening up for business. Not surprisingly, foreign investors are rushing into the country, hoping to take advantage of the economic opportunities that will surely follow.

Some consider the only problems to be practical in nature. Can Myanmar's sleepy bureaucracy and antiquated infrastructure cope with the influx? A report issued by the Asian Development Bank on August 20 added to the list. The main risks, it said, included factors such as weak macro-economic management and low tax revenues.

Overall, however, the bank painted a rosy picture of the country's economic prospects after five decades of economic isolation. Myanmar, the bank said, was poised to become Asia's next "rising star."

The euphoria, of course, is understandable. There is not much economic growth around these days, especially in the United States and Europe. And with China, Japan and even India starting to slow down, Myanmar looks far more attractive than might otherwise be the case.

What many seem to have forgotten, however, is that less than two years ago, Myanmar was little more than a military dictatorship, and that even now the military exerts a powerful influence on the government.

History suggests that military juntas do not give up power easily, and when they do, it is almost always to those whom the generals believe can be trusted to protect their interests.

Should the military decide that its interests are under threat, political and economic developments could take a very different turn, with serious consequences for the investors who are flooding into the country.

Optimists can point to the fact that, earlier this month, the soldiers who dominate the national legislature agreed to support the appointment of the nation's politically moderate naval chief as one of the country's two vice-presidents.

But this development needs to be seen in the light of the fact that Parliament took almost a month to make the decision. The army MPs, who make up the majority of the military's representation in the legislature, initially preferred retired general Myint Swe — an army hardliner with close links to former strongman Than Shwe. They abandoned the effort only when it was pointed out that a constitutional provision initially crafted to prevent opposition leader Aung San Suu Kyi from holding office also made Gen Myint Swe ineligible.

Tellingly, as late as July 25, MP Htay Oo, the head of the ruling Union Solidarity and Development Party, was insisting on supporting Gen Myint Swe. "He's the only one we nominated," he told Agence France-Presse.

Army generals have long distrusted the navy. They have not forgotten, for example, that many navy personnel joined in the 1988 demonstrations against the regime that were bloodily suppressed by the army.

Adm Nyan Tun may therefore have a tough job convincing the generals of his willingness to safeguard army privileges.

President Thein Sein's commitment to reform seems genuine. But his experience as an army bureaucrat rather than a combat soldier limits his influence among serving generals. He also has a heart ailment and uses a pacemaker. He may not be in control for long. Will reform continue if he is no longer around?

Some observers believe key military figures have little interest in real reform. The generals are supportive for now, but only because such reform opens up the possibility of reducing Myanmar's dependence on China.

Meanwhile, the passage of a much-needed foreign investment law has been delayed because of the concerns of local businesses — many of them closely linked to the military — that they may be displaced by foreign companies.

In other words, if the current transition is not handled carefully, opposition to reform could grow very quickly.