Cave of the Monkeys find complicates our Asia story 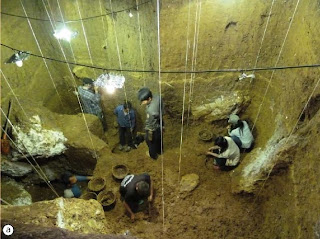 Researchers excavate the Tam Pa Ling cave in Laos, where skeletal evidence of “the earliest” modern humans in Asia was discovered.

An article published this week in the Proceedings of the National Academy of Sciences by Fabrice Demeter and co-workers describes a new modern human skull from Tam Pa Ling (Cave of the Monkeys) in Laos believed to be between 63,000 and 46,000 years old. 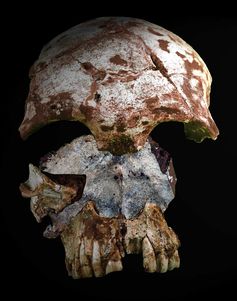 The skull – which you can see in the reconstruction here on the right – is undoubtedly from a modern human and is claimed by the authors to provide the earliest compelling evidence for modern humans in East Asia.

Asia occupies one-third of the planet’s land area and contains two-thirds of the world’s human population. Yet, we still know so little about human origins in the area – it’s almost a crime!
Just when did the founders of modern Asia enter the region after exiting Africa? Who did they look like? Stone Age Africans, or recent Asians?

We know the Cave of Monkeys seems to have been disturbed, as the entire upper half of the soil has been washed out, replaced with a substantially younger soil. Within less than one metre, the age goes from 51,000 years to 2,700 years old (a difference of more than 48,000 years).
Another concern with the dating is that the age estimates are somewhat out of sequence and in conflict. 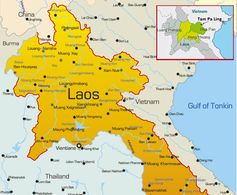 There are dates on sand grains in the cave of 48,000 years a good two metres below the skull’s recovery unit and a date of 46,000 years 20cm below it. The authors themselves state that dates from sand grains “should provide a result close to the ‘true’ burial age".
Yet the skull is dated directly, using a different method, to about 63,000 years old, but with large errors. Dates using the radiocarbon method are also out of order (inverted), suggesting the soils have been disturbed once they were formed.

These apparent conflicts would need to be resolved before claims for the oldest modern human can be accepted.

If Demeter and colleagues are correct in their dating assessment, this find shows the earliest humans in the area were extremely modern-looking: not like early modern humans in Africa, nor West Asia, and nothing like the Red Deer Cave people described by myself, Ji Xueping and others earlier this year.

It would also show that very modern-looking humans had settled widely across Asia by about 50,000 years ago.

This is important because some much younger humans – such as the remains we dubbed the Red Deer Cave people from southwest China – are very archaic looking. 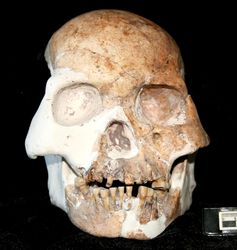 The Tam Pa Ling skull has the distinctive features of a modern human, but is too incomplete to allow an assessment of whether it resembles recent East Asian people.

It also lacks the many archaic features we described for the Red Deer Cave people from southwest China.

I was surprised to read that Demeter and co-workers essentially ignored our Red Deer Cave people finds.

In a one-liner, they simply dismissed our work as irrelevant, without providing any valid reason for doing so.

As the team co-leader for that discovery, I think they missed a golden opportunity to consider the diversity that existed in the late Ice Age of the region as well as to better understand the complexity of human population history at the time.

Placing the Tam Pa Ling skull into a broader context will be crucial to establishing its importance to human evolution.
While the Tam Pa Ling discovery holds great promise in its potential to tell us about the early origins of recent East Asians, more work will need to be done to provide a solid case. Did our Asian story just get more complicated? It seems so. An article published this week in the Proceedings of the National Academy of Sciences by Fabrice Demeter and co-workers describes a new modern human skull from Tam Pa Ling (Cave of the Monkeys) in Laos believed to be between 63,000 and 46,000…