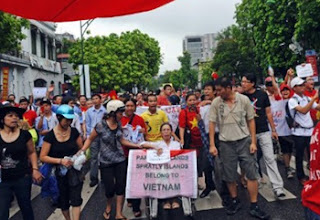 Social media begins to drive opposition to the regime
The citizen shall enjoy freedom of opinion and speech, . . . the right to assemble, form associations and hold demonstrations in accordance with the provisions of the law. Article 69

The citizen has the duty to obey . . . the law, join in safeguarding national security and social order and preserving national secrets, and respect the established rules of public life. Article 79
- Constitution of the Socialist Republic of Vietnam

For the past several Sundays, Western wire services have been reporting on anti-China demonstrations in Vietnam. Closely watched by police, the demonstrators, never more than a few hundred, have paraded in Hanoi and Ho Chi Minh City to protest Chinese provocations in the large part of the South China Sea where Vietnamese and Chinese claims overlap.

Invariably AFP, Reuters and the Associated Press, etc. describe these demonstrations as "rare." The wires are wrong. Though a recent informal poll of academic Vietnam specialists failed to turn up anyone who's been keeping careful count, a consensus readily formed that public protests have become relatively common in Vietnam.

The protests rarely attract the attention of the Western news media. That's partly because Western reporters are themselves rare these days. Only the wire services continue to assign expat staff to Vietnam.

For major events -- a regional meeting or a Vietnamese Communist Party congress, say -- a few dozen more reporters from major Western newspapers may fly in to file a few stories. However, in this era of shrinking revenues for the mainstream media, really 'covering' Vietnam just isn't worth their effort.

By and large, they're missing a major story. It's not just about anger at Chinese imperialism.

The Vietnamese regime has staked its claim to relevance and, hence, its right to rule, on the success of an economic doctrine that yokes a free-wheeling capitalist sector to an inefficient state-owned industry sector and burdens both by endemic corruption. Be that as it may, the country's "market-oriented socialism" has until recently delivered annual GDP growth averaging 7 percent.

Following much the same arc as China, but lagged by a generation, Vietnam has become one of the world's workshops. However, global recession plus two vicious bouts of inflation since 2008 have dimmed the luster of that accomplishment. With growth flagging, Vietnam's citizens are these days more ready to question the logic of a political system that limits political participation to the 3 percent of the population that have been admitted to Communist Party membership.

The thousands of factories and workshops where gadgets are assembled, garments stitched and footware shaped for foreign clients, many little more than sweatshops, have been plagued by impromptu strikes. Nearly 1,000 erupted in 2011, or twice as many as in 2010 and four times the average of the past 16 years according to Vietnam's Labor Ministry.

Reports on blogs and references in vernacular newspapers suggest a similar uptick in protests against "land conversions," the expropriation of small farms to provide space for more industrial zones, housing developments or other purposes.

The sense of the complaints typically is that compensation is meager while corrupted officials and managers higher up reap windfall profits.

When efforts to secure justice at the local level fail, aggrieved citizens will often stage a sit-in in a provincial or central government office or pitch camp in a city park. Surrounded by banners or signs stating their grievance, they'll hope to shame higher levels of government into taking remedial action. Rarely does this work. In fact, rarely are they allowed to remain for more than a few hours.

It is also becoming common to see protests outside an office building, a courthouse or a construction site. Such incidents have the quality of a flash mob -- angry stockholders, creditors, plaintiffs or dispossessed individuals assemble rapidly, brandishing handwritten placards and, more often than not, they are hustled away just as soon as the police can mobilize overwhelming force.

Protests like these are invariably illegal. Though Vietnam's constitution guarantees citizens the right to assemble, implementing decrees forbid the formation of organizations not authorized by the government. And, though the constitution specifically states that citizens may hold demonstrations, they may only do so in practice after securing a parade permit several weeks in advance.

Until internet access became broadly available in Vietnam a decade ago, ordinary citizens remained generally unaware of protests outside their home towns or villages. Thus, when tens of thousands of protesting farmers blockaded district offices in a province not far from Hanoi for weeks late in 1997, the general public could only guess what was happening by reading between the lines of state-sanctioned newspapers, which reported that "bad elements [were] abusing the situation and stirring up the people."

All that changed with the advent of current affairs-oriented blogs circa 2007, first on Yahoo 360° and later on Facebook and on offshore sites like wordpress.com and blogspot.com. Now, to the frustration of the Vietnamese state agencies charged with maintaining internal security, word gets around in a few hours. Concurrently, the nation's newspapers have been allowed a somewhat looser rein. Though they remain subject to "guidance" and post-publication censorship, a few dozen national dailies provide lively coverage of local scandals. This presumably reflects a regime effort to steer a middle path between "all the news" and "no news at all."

By the end of 2008, members of Vietnam's blogging community had become not just reporters but also activists, an evolution heralded by December 2007 demonstrations against Chinese provocations in the South China Sea and, a year later, by a crescendo of online criticism against a government decision to allow Chinese firms to exploit bauxite deposits in Vietnam's central highlands.

Moreover, even a casual reader could discern that many who posted comments had a broader agenda, that is, the expression of fundamental disenchantment with the party/state itself.

The rise of the political blogs posed a dilemma for Hanoi. Bloggers' comprehensive reportage of South China Sea issues stoked patriotic passions and focused attention on the alleged 'weakness' of the regime's management of the dispute with China. They surfaced hitherto obscure complaints as well -- reports of crackdowns on non-sanctioned religious groups as diverse as Falun Gong activists and evangelical 'house churches' in ethnic minority villages. Other bloggers concentrated their effort on tracking the labor and agrarian unrest discussed above. Volunteers scoured the foreign media to translate and post articles that had been until then inaccessible to the general public.

Vietnam's police agencies have responded by devoting more and more resources to monitoring the vernacular 'blogosphere.' Their monitoring equipment is sophisticated. If instructed, the police could likely fill several prisons with citizens who have, arguably, "propagandized against, distorted and/or defamed the people's administration" (Article 88 of the Penal Code). In fact, the police response has been selective: they have in recent years detained and tried a few dozen bloggers and subjected many others to close surveillance and long "working sessions" with police interrogators.

In one high profile case, the police were able to connect domestic activists to the Viet Tan Party, a mainly emigre group that the regime labels "terrorist."

However, the genie is out of the bottle. Though there's no doubt that the security agencies have assembled a comprehensive map of the nation's blogosphere, they cannot contain it. For every blogger who is put out of action, several more spring up. Vietnam's historically tiny band of human rights activists has been able to argue the case for civil and political freedoms to any citizen with a dial-up internet connection -- by a recent count, more than a third of Vietnam's 90 million people. Millions, apparently, are avid readers.

In June and July 2011 and again this month, the well rooted tradition of impromptu demonstrations and the newer phenomenon of Internet-enabled, blog-driven dissidence converged. For the first time, relatively large and sophisticated demonstrations were coordinated in several cities via blog posts, instant messaging and other social media. Once again, the spark was aggressive moves by China in the seas off Vietnam, and once again the demonstrators were not simply angry at Beijing, but also sharply critical of alleged weakness by their own government.

Blog reports point to vigorous police activity to limit the latest round of anti-China demonstrations without being seen to suppress them. Tactics have included taking prominent bloggers and dissident intellectuals into temporary detention or putting them under de facto house (or temple) arrest, and flooding assembly locations with camera-toting plainclothes policemen. Participation remains a rash act. In 2011 at least, some prominent protesters were arrested, forced out of jobs at state entities, and, in one case, sent to a re-education camp. The result of such discreet harassment seems to have been, this year, a substantially more "youthful" and autonomous turnout.

Also evident earlier this year were signs of convergence between the current of protest against corrupt and exploitative local officials and the national platform afforded by bloggers. Perhaps emboldened by Prime Minister Dung's praise of the press for its coverage of a fish farmer's armed resistance to a land grab in January, villagers near Hanoi contacted reporters and bloggers in advance of a mass protest against the expropriation of farms to clear land for a garden suburb dubbed "EcoPark." In the event, 3,000 police confronted 1,000 demonstrators and press censors moved swiftly this time to stifle reportage in the mainstream media. They could not, however, stop detailed reports of the incident from circulating in the blogosphere.

Public protests chip away at the legitimacy of Vietnam's party/state apparatus. The new reality is not that protests occur, but that news of them circulates immediately and widely via the Vietnamese language internet.

Regime conservatives believe that any concessions to demonstrators signal weakness and simply incite further sedition. Regime realists know that Vietnam does not possess the military means to confront China in ways that the cyber-dissidents and Sunday marchers demand. Even those within the party and state who hope to move toward more inclusive and transparent governance are spooked, for they have had years to reflect on how deeply-rooted grievances and far less sophisticated forms of social networking converged to bring down Communist regimes in eastern Europe.

This is not a regime that's about to crumble, though that could happen if leaders simply deny the validity of popular protest. For now, most Vietnamese are still inclined to believe that the system itself is sound and ultimately responsive, notwithstanding the bad behavior of local officials.

The great majority of the population would also still agree that -- as the Hanoi party committee's newspaper put it -- the young people parading in the streets are earnest but misguided patriots, and that the best way to deal with Chinese provocations is a strategy that "is clever and firm, determined yet necessarily flexible in support of the immutable principle of maintaining our sovereignty inviolate." In short, recalling the lessons of a thousand years of Vietnamese experience in dealing with Chinese bullying, the regime's posture is not to give in, but not to be foolhardy, either.

The same party paper asserts that behind the earnest faces and hand-lettered placards of the protesters lurk "people with a different agenda" . . . inveterate malcontents who "go so far as to publicly incite and propagandize against the regime, who deny the leading role of the Vietnamese Communist Party. . . , people whose thoughts are not normal." It's not at all clear that the average citizen continues to believe that these people -- who do indeed have a different agenda -- are entirely crazy.