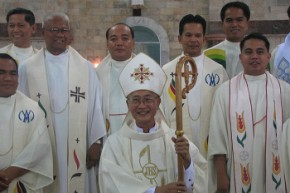 Catholic Church goes all out to stop reproductive health bill

The Philippine Catholic bishops’ war against President Aquino for his support of the Reproductive Health Bill, has reached a crescendo, which suggests the church hierarchy is more concerned with power than principle. The hierarchy of (presumed) celibates were making a major stand against the president’s appeal in his July 23 State of the Nation address for passage of the long delayed, much-amended bill.

On Saturday the bishops got behind what purported to be a “people power” rally against proposed legislation which would, among other things, provide contraceptive assistance to those seeking it. The attendance, reported at 10,000, was substantial but hardly overwhelming for a city of 10 million. Others demonstrations occurred elsewhere as the celibate priests led the cry “contraception is corruption.”

Contraception is already the norm among middle and high income-earners but the bill would enable the state-run PhilHealth fund to provide free contraceptive advice and means for free.

More remarkable even than the determination of the hierarchy to thwart the bill was that most of the bishops backing the demonstration were the very same ones who had been recipients of gifts of SUVs from disgraced former President Arroyo and had paid her back by supporting congressmen who thwarted impeachment bids against her.


The association of the church with some of Arroyo’s worst abuses said to be justified by her claims that she is a devout Catholic who is opposed to contraception. The bishops know perfectly well that a high proportion of the legislators voting on the RH use contraceptive devices and that many are regular frequenters of the many hotels devoted to extra-marital sex where condom use is the norm. But the bishops are willing to engage in any political alliance to thwart the rights of the poor Filipinos who would like as much access to contraception as the richer ones who already use it regularly.

They are also been ready to use under-age girls to support their cause, as though pre-pubescent women have any idea of the issues at stake. Similar to the young innocents conscripted to Hitler Youth and Communist Young Pioneers, school kids have been mobilized by the church in their thousands to oppose adults rights to choose. It is sick but a good cover for the fact that most Filipinos adults favor the RH bill and in practice tend also to be tolerant both towards “deviants” (gays) and extra-marital relationships.

If the bishops were not somehow protected by the strength of the global church and the influence of the Vatican, their methods of opposition to the RH bill could well be viewed as a major assault on the human rights of Filipinos. It is the other side of the coin represented by China’s one-child policy and forced abortions.

The Philippine church has yet to be sullied by the cover-ups of pederasty carried out by priests against boys in their charge seen in the US, Ireland etc – cover-ups which went all the way up to a Rome in which the current pope was a major player. But the local church draws a blanket of hypocrisy over the incidence of local priests having regular sexual relationships – mostly with women. These are of course understandable given that a lifetime of voluntary celibacy is as unnatural as it is rare. But it leaves the issue of whether the priests themselves practice contraception, or are responsible for a significant number of births. 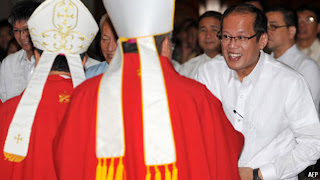 The corruption and power plays at the Vatican itself have recently been in the spotlight so it would be hard to expect the Philippine church to be any better. But it is past time that that the legislators in Manila put the church in its place just as those of Ireland and Italy eventually did, freeing the population at large from the oppression of a priestly elite who (officially at least) know nothing about conjugal sex or the issues of raising a family.

The bishops have even now had to resort to arguments against the RH bill which have nothing to do with god or spiritual issues. They now suggest that easy availability of contraception will lead to a future labor shortage as allegedly happening in the west! What an insult to the tens of millions of underemployed Filipinos whose taxes, school fees etc help keep the bishops in medieval princely style.

Filipinos should now be yearning for the return of the era of sexual equality and tolerance which preceded the arrival of Christian friars and Muslim preachers 500 years ago. Asia Sentinel