US strategy: between the ‘pivot’ and ‘Air-Sea Battle’ 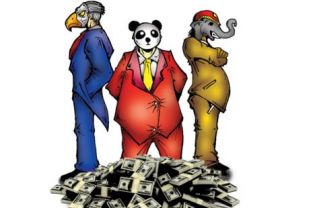 As the US war in Afghanistan draws to a close, the attention of US foreign policy, think tanks, pundits and analysts is turning to the US posture in Asia.

The Obama administration has spoken of a ‘pivot to Asia’, and in 2010 the US used tensions in the South China Sea and on the Korean Peninsula to increase its diplomatic and military engagement in the region. Since then, it has continued to foster closer links with Vietnam and the Philippines; announced the future permanent deployment of four littoral combat ships to Singapore; and begun to base US marines on a semi-permanent basis in Darwin, Australia.

Although the ‘pivot to Asia’ has become a phrase often used to describe increased US engagement, it is the name of a military-operational concept — Air-Sea Battle — that has most captured the imagination of audiences in Asia and in the US itself. Air-Sea Battle describes how US forces should operate to ‘blind’ and ‘roll back’ the dense maritime area and access denial capabilities that China has developed over the last two decades. Questions remain about the political credibility and financial feasibility of the concept, which heavily relies on submarines and a future new heavy bomber, rather than existing surface vessels.

Parallels between Air-Sea Battle and the AirLand Battle concept of the 1980s are intended and obvious — including those parallels found in the biographies of major proponents, bureaucratic politics and service rivalries inside the Pentagon, questionable assumptions about the role of nuclear weapons in major war, but also in the attempt to address difficult operational problems facing US forces in areas of core strategic interest.

There the parallels largely end. The AirLand Battle concept developed for NATO’s Central Front fitted into an established and stable regional situation, and supported the existing and widely accepted NATO strategy of containment through deterrence. In light of a perceived loss of US nuclear superiority, NATO forces needed to prevent the Soviet General Staff from being able to brief the Politburo with a viable theory for conventional victory in Europe. A credible AirLand Battle capability allowed NATO to threaten escalation in even localised armed conflict with the Soviet Union in Europe. Mutual interest in avoiding nuclear Armageddon thus prevented armed conflict, contained the physical expansion of communism, and gave US allies in Europe the political space to be the masters of their own destiny. To play their role in containment through deterrence, US forces already forward deployed in Europe (and North Asia) merely had to prepare for their wartime missions, and serve as sacrificial ‘tripwire’ forces demonstrating US commitment.

But this no longer adequately describes the political role of US forces in Asia today, because US strategy is no longer based on the containment of physical expansion through deterrence. Despite competing maritime claims, and with the notable exception of Taiwan, territorial disputes are proximate rather than ultimate causes of tension in Asia. Instead, paraphrasing Thucydides, ‘the real cause’ of tension is ‘the growth of the power of [China], and the alarm which this inspired’ in countries in the region.

Hence, US forces in Asia today are there less to deter Chinese physical expansion, or even Chinese influence in general — which is, after all, another by-product of the Asia Pacific’s welcome and increasing economic integration. Rather, littoral combat ships, marines and other forces now or soon to be deployed in Southeast Asia support a much more nuanced US strategy, which seeks to support regional countries’ ability to withstand Chinese bullying in maritime disputes, increase interaction with the People’s Liberation Army (PLA) through joint exercises and exchanges, and in general to ‘socialise’ China and the PLA in what the US and its partners consider acceptable behaviour.

Between the political concept of the ‘pivot’, which evokes the ephemeral nature of US attention rather than an enduring commitment, and the Air-Sea Battle concept, with its focus on major-power war with China, this evolving and nascent US strategy remains without a name.
‘Containment’ or ‘Air-Sea Battle’ are the often-used proxy terms that distort the US’s present-day approach and its intentions, and do not capture the nuance in the emerging US strategy and posture. But without a common and broad understanding of the basic strategy, it will be difficult to build and sustain the regional and domestic understanding and support that is necessary for that posture and strategy to be viable over the long term. The current geostrategic window of opportunity for the US may well close before it can sufficiently explain to the region what it is trying to do and how.

What is needed, in short, is a public diplomacy term that does for the US and its allies in 21st-century Asia what the term ‘containment’ did during the Cold War. Who would have thought that a US policy initiative might ever be left wanting for lack of a catchy phrase? Maybe the US strategic community should take a leaf out of China’s book and announce a US ‘strategy for harmony and order’ in Asia.

Stephan Frühling is Senior Lecturer at the College of Asia and the Pacific, the Australian National University, and Deputy Director of Studies at the ANU Military Studies Program, the Australian Command and Staff College. East Asia Forum