Thailand Counting the cost of populism 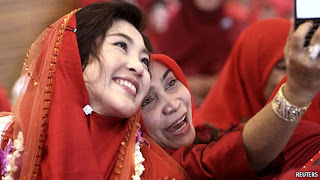 As the Yingluck administration geared up for nationwide events this weekend to mark its first year in office, critics yesterday expressed concern that the government's populist policies would harm society and increase public debt.

Car manufacturers are planning to show off models eligible for the government's "first-car scheme", while state banks are going to offer loans at the government expo, which will be staged all over the country.

Tanusak said 12 carmarkers would open booths at the events, allowing visitors to place orders for vehicles that are eligible for tax breaks under the first-car scheme. State-run banks would also offer car hire-purchase loans, first-home mortgages and other financing. Other state agencies will also join the expo.

"The government wants to inform people nationwide about its policies and the many forms of credit that they can access, " Tanusak said.

He rejected criticism over the high possibility that taxpayers stand to lose hundreds of billions of baht from the rice-pledging scheme, saying farm-product prices are rising due to global drought conditions. "I think next year rice prices will increase, as India cannot currently deliver rice orders," he said.

The deputy minister said the cost of the first-car scheme would not be much over the Bt30 billion forecast previously, adding that each buyer can get tax refunds of up to Bt100,000. Car sales under the scheme may exceed 500,000 now that the government had recently relaxed some conditions, he said.

Since car owners must own a car for one year before they can ask for a tax refund, the cost in forgone revenue to the government will be absorbed gradually over a period of years, not in one go, he said. He defended other populist policies as a way to boost the economy and improve living standards.

Praipol Koomsup, professor of economics at Thammasat University, said that while they may have some positive effects on the economy, most of the government's policies tended to be extremely populist in nature.

He said that most economists do not agree with the rice-pledging scheme, in which the government buys rice from farmers at prices higher than the market prices.

"The loss of taxpayers' money may not be important as much what we get from expensive policy(?),This scheme will not strengthen farmers - they will ask for help again and again," Praipol said.

He said rice prices might not increase in the same way that corn prices have risen in the United States, because the two products' markets work differently.

The first-car scheme was a mistake, Praipol said, because there are already too few roads for the existing number of cars. More vehicles would result in more traffic jams in Bangkok and big cities, he said. "It would be better if the government could save money and then allocate such funds to finance the railway or mass-transit system."

If the government spends large sums on things that deliver returns to the country, that's great, Praipol said. But these populist policies will likely pile up public debts, as the government plans to invest another Bt350 billion in a flood-prevention system. This raises the prospect of real problems of high public debt in the future, he warned.

Sophon Pornchokchai, president of the Agency for Real Estate Affairs, said that almost one year after the first-home scheme's implementation, only Bt4 billion had been lent by the Government Housing Bank, against a target of Bt20 billion. The scheme offers a zero-per-cent interest rate for three years on homes priced not over Bt1 million. Some have suggested increasing the maximum home price to Bt3 million, but Sophon said it is not necessary for the state to intervene at all, as the real estate market functions very well. Banks also compete with each other to offer the best mortgage rate, he said. "The government should save money for other development purposes." The Nation, Bangkok