Islands of the damned 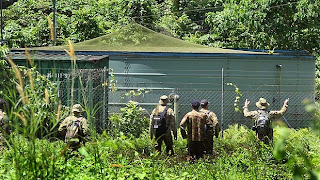 His is a voice that wouldn't normally be heard above the gales howling across the political landscape after his report's release on Monday.

But with Canberra rushing at breakneck speed to adopt the panel's advice on reopening offshore processing centres on Nauru and Manus, the priest had a poignant question to ask. 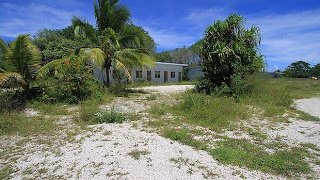 Writing in a small Catholic journal, he wondered whether the very name of his island would now become ''linked around the world with injustice and persecution''? And how would the resumption of offshore processing differ from early Australian history, ''when England decided to solve her convict problems by sending them around the world to Botany Bay - out of sight, out of mind?''
The church hierarchy on poverty-stricken Manus is also said to be worried. Millions will be spent on a new camp for asylum seekers while their own people still lack schools, health programs and decent roads.

As the refugee advocate Ngareta Rossell sees it, ''they are saying … all these people are going to drop in from outer space … build up all this stuff, pay some local people they are employing a lot of money, then change their mind and go again. That's what happened last time.''

Yet with boat arrivals soaring from just 179 four years ago to more than 7000 so far this year, the government was desperate for a circuit-breaker.

In picking Angus Houston to lift the crucifix from her back, Julia Gillard has chosen a man not lacking courage. He was the one who revealed to the world in early 2002 that boat people had not thrown their children overboard, despite the prolonged reluctance of Howard government ministers to admit it. And he has not shied away from unpalatable advice this time around.

The report recommends a mix of carrot and stick to alter what it calls the ''current balance of risk and incentive'' for those contemplating a perilous sea voyage in a leaky boat.
It wants Australia to immediately double the numbers of refugees it takes from around the region and to boost funds to bodies like the United Nations High Commissioner for Refugees, so that asylum seekers languishing in holding countries like Malaysia and Indonesia can be processed more quickly.

The real political dynamite is the recommended return to elements of John Howard's Pacific
solution, so long reviled by Labor. Boat arrivals are to be banished to Nauru and Manus (or another centre in PNG) and held there for as long as they would have waited had they not attempted the sea voyage.

They will be further penalised by losing the right to have families join them under humanitarian provisions of Australia's migration program.

''Hard-headed but not hard-hearted'' is how the panel sums up its approach.

That's not how a former head of both the Prime Minister's and Immigration departments, John Menadue, sees it.

''It is exceptionally cruel, what is being proposed'' he says. ''There are a lot of useful things in the report, but reopening Nauru is a major mistake.''

He says the failure of the Greens to back down from ''policy purity'' and negotiate with the government over its preferred Malaysian solution (which would have meant shipping boat arrivals to Malaysia and taking thousands of registered refugees in return) must carry a large part of the blame for Labor being ''cornered'' into adopting Howard's old policies.

Houston confesses he's been braced for the inevitable backlash, which has come from refugee advocates and their many allies in the law and health professions.

''I thought long and hard about getting involved in this. I could see a lot of downsides. And I knew that whatever we did we would please some of the people but we would displease an awful lot of others.

''At the end of the day the thing that really affected me, indeed all three members of the panel, was that somebody had to do something to stop the great loss of life at sea. A thousand people is a thousand too many. If you put it in terms of air travel, can you imagine if we had had 10 737s that had been lost, with 100 people each time, over the waters between Australia and Asia? Do you think that would be accepted? I don't think it would.''

Given the nation's pathological obsession with boat arrivals - or ''irregular maritime arrivals'' as the panel dubs them - the Houston report offers some sobering perspectives.

It points out that there are more than 15 million refugees world-wide, of whom less than 1 per cent were resettled last year.

And that while Australia is one of the top three resettlement countries, Pakistan and Iran still play reluctant host to 95 per cent of displaced Afghans.

As the UNHCR submission to the panel reminds us, the number of boat people who reached Australia in the whole of last year was just half the number who crossed from Somalia to Yemen in a single month last August, and in a single day between Syria and Lebanon last month.

Yet the most fundamental question remains whether the medicine prescribed by Houston will work.

On statistics alone, the surface case for offshore processing looks compelling. Numbers of boat arrivals did drop dramatically when the first Pacific solution was in place. Yet the Immigration Department was among the leading voices casting doubt last year on whether Nauru and Manus would work again.

Did the Houston panel ignore this? He says not, and argues that the prospects for success this time around are boosted by there being many more strings to the bow.

''That's why we have emphasised that this is a package that needs to be implemented in its entirety,'' Houston says. ''You are taking regular refugees out of the near region [Indonesia and Malaysia] and you are also taking more refugees out of the source countries … You are targeting the whole pipeline with strategic allocation of places so that people can see, 'Oh, I don't have to pay a people smuggler to get me to Australia.'''

The former senior immigration official Arja Keski-Nummi says she can see the logic of the Houston approach ''even though I find it very hard to swallow''.

But she warns the government cannot ''cherry-pick'' the package.

''Resourcing the UNHCR to do the registrations quickly, processing more people for resettlement quickly - we have to see the same alacrity applied to these things as putting tents up in Nauru. So that people can actually see that more channels are opening.''

The Refugee Council of Australia is bitterly disappointed by the return to offshore processing and believes any deterrent effect will be short-lived, overwhelmed by the sheer numbers waiting in desperation around the region.

''No doubt some will be deterred, but we don't know how many,'' says the council's CEO, Paul Power.

''The situations that a very high proportion of people are facing in their home country, the hopelessness of the situation in countries of first asylum in Asia, are such that people are left with little option to try to move on to somewhere.''

He also believes the government has missed a critical opportunity to sell those parts of the package that were meant to offer hope. ''It's unfortunate the Parliament has seized on the deterrence measures and we have heard very little about the increased refugee protection measures,'' he says.

''If the government's intention was to get a positive message to people who might be thinking about travelling by boat, they have totally failed.''

Ngareta Rossell believes there is an additional obstacle for the Houston proposals in the corruption which underpins the people smuggling trade.

''The ones who are making the money are the Indonesians,'' she claims, drawing on discussions with people smugglers. ''The people getting the bribes are the army, navy and police - everybody who turns a blind eye the night the boats leave.''

When the Herald's Indonesian correspondent, Michael Bachelard, spoke to Afghan exiles in West Java this week, many said they would still get on a boat if they could. But one, Muhammed Khani, said if the Australian government could fix ''this long claim processing … I promise you no one [would] come by boat.''

Houston accepts that the tap cannot be turned off immediately.

''There is probably a lot of people already in the pipeline who have paid for a service, and are waiting for that service to be delivered. I'm not sure you get a refund … There will be people who will probably still come for a little while, but it will be interesting to see how quickly it does take effect. I think it will take effect reasonably quickly.''

Is the Pacific solution Mark II better or worse than Mark I? There are widely conflicting views, even among refugee advocates.

Paul Power says he believes that the psychological effects of long waits on Manus or Nauru will be just as devastating as they were previously, even though people will no longer be locked up.
Jane McAdam, head of the University of NSW's international refugee and migration law project, is also unconvinced by new protections proposed in the report, such as better rights of appeal.

''I think it's worse. Because this current Pacific solution bans you from bringing your family across under special humanitarian provisions.'' And she lambasts what she sees as specious breastbeating by politicians over the tragic drownings at sea.

''I'm concerned that saving lives at sea has become the socially acceptable way of saying we don't want you here.''

Those who have been at the sharp end of policy-making, like Keski-Nummi, know there are no easy answers. ''In the end you just have to make some finely balanced judgments and give them time to work. I think one of the things we never do is give things time to work.''

Deborah Snow for The Age, Melbourne