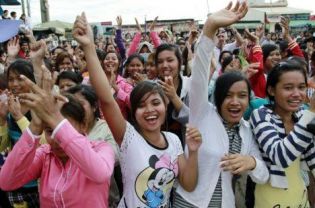 In a rare display of concern for his government’s human rights record, Cambodian Prime Minister Hun Sen has moved to forestall criticism of human rights and environmental abuses connected to economic land concessions.

The Cambodian government has recently opposed the corporate misuse of economic land concessions (ELCs) and has made a long-overdue offer to recognise the claims of rural Cambodians to the land on which they live. These actions seem to indicate that Hun Sen and his advisors are developing a new understanding of the relationship between respect for the rule of law, human rights and economic development.

Human rights advocates oppose this interpretation on the grounds that the government’s new campaign against corporate abuse of ELCs is solely intended to undermine a forthcoming negative report by UN Special Rapporteur on Human Rights in Cambodia, Surya P. Subedi. Human rights groups have also claimed that the government’s attempts to initiate land reform are a tactic to divert attention from the recent death — possibly at the hands of the military police — of forestry advocate Chut Wutty. Only time will tell which interpretation is correct.

On 7 May 2012, the Cambodian government issued an order establishing an immediate moratorium on new concessions and calling for a review of all existing concessions. The government specifically threatened to seize concessions that were left undeveloped and those where illegal logging, illegal mining and expropriation of already inhabited land had taken place. This announcement coincided with Subedi’s arrival to commence his investigation of ELCs.

On 11 May, Subedi announced the preliminary findings of his mission. He claimed that the government had failed to implement the laws governing ELCs with transparency or respect for human rights, and that businesses benefiting from ELCs had failed to demonstrate corporate responsibility in managing the concessions. Subedi noted that the 2011 UN Guiding Principles on Business and Human Rights applied to Cambodian and foreign companies doing business in Cambodia, and that the government had a duty to ensure those principles were respected.

Hun Sen’s reaction was swift and surprising. On 14 June he confirmed that illegally administered company ELCs would be revoked, and that land titles within the revoked concessions would be granted to the people who lived there. Hun Sen also declared that 10 per cent of every ELC and forest land concession would be set aside for people to live on, in anticipation of increased demand for land.
The response of the Cambodian people was overwhelming: by 24 June, over 300,000 families had laid claim to more than 1.2 million hectares of land. On 26 June, Hun Sen announced that government workers and youth brigade volunteers across the country would be mobilised to carry out the land measurements necessary to implement the new policies.

Though the Cambodian government has taken steps to review existing concessions, it may be optimistic to conclude that it has finally perceived that enforcement of its land laws will benefit all concerned — the companies seeking land concessions, the government and the people. Rural Cambodians, the losers in four decades of chaotic recycling of land titles beginning with the Khmer Rouge and continuing to this day, will benefit because they will attain secure title to the land on which they live. Meanwhile, companies holding the ELCs will benefit from the cessation of hostilities with indigenous and other peoples claiming rights to the conceded land, and from increased certainty in the implementation of the laws governing their investments in Cambodian real estate. The government will also benefit from increased foreign investment, increased economic development and improved standing in the eyes of the international community and Cambodian voters.

But recent reports from local media indicate that Hun Sen’s resolve may be faltering. Phnom Penh newspapers allege that since the 7 May moratorium on ELCs, the government has privatised 35,000 hectares of land in national parks and wildlife sanctuaries for use in four different ELCs. Government spokespersons asserted that these ELCs were in the pipeline prior to 7 May, and were therefore exempt from the moratorium. Sceptical environmental activists have asked how many more such ELCs are in the ‘pipeline’, but the Cambodian government has not yet provided an answer.

UN Special Rapporteur Subedi is due to file his final report with the Human Rights Council in September 2012. He should point out the need for domestic and foreign corporations to observe the tenets of corporate responsibility established in the UN guidelines. He should also stress that the Cambodian government must respect the rights of its people, give them timely access to government information on the ELC licensing process, and ensure that the corporate beneficiaries of ELCs do the same. The final report should underscore that these measures will result in long-run economic benefits for both foreign investors and the Cambodian government. To ensure that Prime Minister Hun Sen follows through on his commitments, Subedi might also invoke Hun Sen’s own comments that the concession review and moratorium scheme creates a ‘win-win situation for all, the investors and the community’.

Dolores A. Donovan is Professor at the School of Law, University of San Francisco.