The motivations for China’s new energy and climate policies 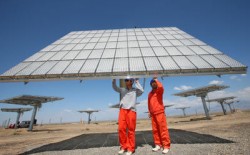 The motivations for China’s recent energy and climate change policies are far more complex than the stereotypical view of China as a country bent on the pursuit of economic growth at all costs would allow.

Since the release of the Eleventh Five-Year Plan in 2006, China has reduced its energy intensity (energy used per unit of GDP output) by almost 20 per cent. China has also set carbon intensity targets and is experimenting with carbon pricing. In less than a decade its renewable energy industry has grown from a very low base to a position of world dominance.

Why has China implemented difficult and ambitious emissions-reducing energy reform and climate policy, when less than a decade ago the country seemed set on a path of unmitigated emissions growth? Recent research based on a survey of key Chinese government documents and Chinese academic articles concludes that three ideas in particular underpin China’s new energy and climate policy: energy security, concern over environmental impacts and the desire to gain a competitive advantage.

Bolstering China’s domestic energy security has been a key motivation. China has suffered from large-scale power blackouts since 2002, when a boom in heavy industry and manufacturing severely strained China’s electricity and coal supplies. A report from the China Electricity Council predicts that in 2012 alone electricity supply will fall short of demand by 30 to 40 gigawatts. Failures in China’s electricity system have raised new fears of domestic ‘electricity insecurity’ and ‘coal insecurity’. According to the Energy White Paper, China now ‘stresses both development and saving [of energy resources], with priority given to saving’.

China now has a system that constrains energy use at multiple levels of the Chinese economy, ranging from central and local governments to individual enterprises. Old, small and inefficient facilities were gradually closed down by the government in the course of the Eleventh Five-Year Plan. Largely as a result of this, the average efficiency of China’s electrical power plants is now higher than the US. Financial incentives — including the removal of fuel subsidies, energy tax reform and changes in electricity pricing — also aim to improve efficiency. China reduced its emissions from a business-as-usual trajectory by 1550 metric tonnes of CO2-equivalent over the Eleventh Five-Year Plan. Improvements in energy efficiency represent 87 per cent of this reduction.

As concern grows over local environmental pollution, the government is becoming increasingly aware of damages caused by climate change. This understanding is the second motivation for policy action. Several government documents, including a book-length review of climate change impacts and two climate change White Papers (published in 2008 and in 2011), report that climate change poses a great threat to China’s economic growth, poverty-alleviation efforts, water resources, agricultural production, and to China’s rich and populous coastal areas.

Until the Twelfth Five-Year Plan many of China’s climate-related goals repackaged policies initiated for other goals, such as energy security or local pollution control. But at the 2009 climate change conference in Copenhagen, the government announced that China would reduce its CO2 emissions intensity by 40–45 per cent by 2020. The Twelfth Five-Year Plan sets a target of 17 per cent reduction in CO2 intensity by 2015. This is the first time that an explicit carbon target has been included in China’s national policy.

In the Twelfth Five-Year Plan seven provinces and cities will begin trialling emissions trading schemes. The central government has also made clear its intention to introduce a national carbon pricing scheme around 2015. A national carbon price in China would constitute the largest endeavour in climate economics ever attempted.

Finally, there is a growing consensus in Chinese policy circles that the world is on the brink of a major energy transformation away from fossil fuels to renewable energy sources. Government documents stress that China must ‘gain a first-mover advantage’ and seize the economic opportunities of this historic transition.

The Chinese government has backed up its declarations with extensive public financing for renewable energy. The government has established feed-in tariffs for wind and photovoltaic solar power, imposed an additional fee on all electricity end-users to fund renewable energy development, and has made it mandatory for grid operators to produce electricity from renewable sources. Renewable energy state-owned enterprises are supported through local content rules and by contracts, to the chagrin of some international competitors. The result is that China is now the largest investor in renewable energy in the world: it has the largest installed wind power capacity of any country, and has gone from supplying 1 per cent to supplying 49 per cent of the world’s photovoltaic solar panels in the last decade.

China’s new energy and climate policies alone will not necessarily be sufficient to meet its mitigation obligations. China’s per capita emissions are now at European levels, and China will continue to account for roughly 30 per cent of global emissions until 2030. While renewable energy investment, carbon trading experimentation and energy efficiency are an important beginning, China’s response to climate change will need to grow with its increasing responsibilities. But the strength of China’s domestic climate action and the depth of its motivations should prompt opponents of climate action in developed countries to review their tired assumptions that China does not care about climate change and is doing nothing.