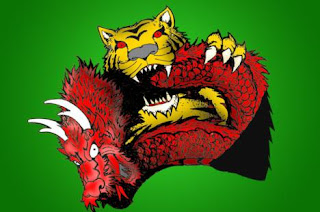 The Chinese are already disturbed that India has allowed the Dalai Lama to run his government-in-exile from Indian soil for more than a half-century.

The India-China rivalry has intensified. Both sides have recently made decisions that have riled the other side to no end. The Indian tiger is roaring and taking the Chinese dragon head-on.

The Chinese provocation has come in the South China Sea, the region where India has stepped up its diplomatic and economic initiatives much to Beijing’s frustration. China has consistently fumed against ONGC Videsh Limited (International Petroleum Company of India) taking up exploration work in a Vietnamese petroleum block. Now China has upped the ante with a dangerous act of unilateralism by putting this petroleum block — owned by Vietnam and claimed by China — up for global bidding.

India has consistently and repeatedly pointed out to China that its oil exploration activities in the South China Sea are purely commercial and are not driven by a political agenda.

Another important point in this context is that the Indian oil exploration activity in Vietnam or in the South China Sea is not something that started yesterday or a few months back. The OVL set up its office in Vietnam back in 1988 when OVL still used to be known as Hydrocarbons India Private Limited.

However, India has also thrown a jab in China’s direction from a diplomatic standpoint. The country is understood to have agreed to allow Taiwan to open a consulate in Chennai.

This can be considered a slap in the face for the Chinese because they have also requested permission to open a consulate in Chennai. The request has been pending for quite some time.

Diplomatic sources point out that India is no hurry to oblige China on its request for setting up a consulate in Chennai. In fact, India has suggested barter to the Chinese and conveyed to them that they can set up their consulate in Chennai provided India is allowed to reopen its consulate in Lhasa, the capital of Tibet.

The Chinese request for Chennai was made about six or seven months ago. The requests for opening new consulates are dealt by countries through the principle of reciprocity. When a country asks another country for permission to open a consulate it would have to allow the other country to return the favor.

As part of this arrangement, India asked China to allow reopening of its consulate in Lhasa.

China is rattled by the Indian request. Tibet is China’s soft underbelly and the Chinese are quite sensitive about Tibet.

The Chinese are already disturbed that India has allowed the Dalai Lama to run his government-in-exile from Indian soil for more than a half-century. India’s formal diplomatic presence in Lhasa, from Beijing’s perspective, could exacerbate issues for them.

From China’s perspective, the Indian request for Lhasa is more or less as outlandish as Pakistan asking India’s permission to set up a consulate in Srinagar.

The India-China negotiations on the consulates issue are ongoing. In all likelihood, the negotiations would be tortuous and long-winded.

Rajeev Sharma is a New Delhi-based commentator on foreign policy, international relations, terrorism and security issues. His latest book is “Global Jihad: Current Patterns and Future Trends.” He can be reached at bhootnath004@yahoo.com.