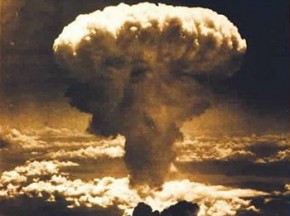 Was the use of nuclear weapons against Japan justified?
The US bombing of Hiroshima ranks as one of history's greatest controversies. Dennis Giangreco, former editor of Military Review, is also the award winning author of Hell to Pay: Operation Downfall the Invasion of Japan, 1945-1947. His path breaking research into Japanese defense preparations leads him to defend the atomic strike. He offers this exclusive interview to Asia Sentinel.

Q. Mr. Giangreco, please summarize the arguments of the critics of President Harry Truman over the bombing.

Actually, they have changed somewhat over time. Originally, his critics maintained that Japan would have soon surrendered even without the atomic bombs or the Soviet entry into the war on August 8 1945. And, more importantly, that Truman knew this but bombed Japan to intimidate the Soviets, not save lives during a bloody invasion --- that Hiroshima and Nagasaki marked America's opening shots in the Cold War.

After the death of Japanese Emperor Hirohito in 1989 and the very public struggle over how to exhibit the Enola Gay bomber that hit Hiroshima at the National Air and Space Museum in Washington, a flood of documents emerged from archives on both sides of the Pacific.

They revealed that there was no compelling evidence to support any of these theories. In fact, there was overwhelming documentary evidence demonstrating the opposite. Truman had meant exactly what he said: that the bombs were used to bring a terrible, brutal war to a swift, and decisive conclusion.

Q. What did you find regarding how the battle of Okinawa in April-June 1945 caused US war planners to revise upward projected battle deaths?

American planners for the invasion of Japan as far back as the summer of 1944 produced a worst-case scenario of "half a million American lives and many times that number wounded." The Japanese Imperial Army's increased efficiency at killing Americans, particularly on Okinawa, demonstrated to US Secretary of War Henry Stimson and many Pentagon planners that the worst case was a real possibility. This begged a question. The invasion of Japan was scheduled for fall 1945. If the situation on Okinawa -- fully half a year before the invasion -- was movng toward the original worse case scenario, was there an even worse case, unanticipated death toll? This notion alarmed Stimson. He ordered a multifaceted examination of the US Army's manpower and training requirements. Shortly before the Potsdam Conference in July 1945, this resulted in an ominous warning: "We shall probably have to kill at least 5 to 10 million Japanese [and] this might cost us between 1.7 and 4 million casualties including 400,000 and 800,000 killed."

Q. Did Truman see these figures?

Yes. But by then he also knew the secret of the atom bomb. At the June 1945 White House meeting where he gave the go-ahead for the invasion of Japan, he expressed hope "that there was a possibility of preventing an Okinawa from one end of Japan to the other."

Q. What new documents about Japan did you examine and where did you find them?

I was long dissatisfied with the cursory examinations of US plans for the assault on Japan --- southern Kyushu then the Tokyo area -- and especially with the nearly total disinterest in Japan's well developed efforts to repel the US invaders. Extensive holdings on both sides' preparations exist in various American national and military archives including our Command and General Staff College. I was determined to produce an analysis that gave as much weight as possible to the efforts of the Japanese Imperial forces to defend.

Q. What did you learn about the Japanese defense plans and how do they tie in to the high death toll predictions?

Japanese planners had correctly deduced when and where the invasion troops were going to land, providing them a priceless advantage in the type of battles that they were going to force the Americans to fight. The land, air, and sea, elements wielded by General Douglas MacArthur and Admiral Chester Nimitz were tremendously powerful --- and amphibious warfare had been developed into an art. But as evidenced by the casualty ratios that emerged from Iwo Jima and Okinawa, the Japanese were very strong.

Q. Some insist that if Washington had softened its demand that Japan surrender unconditionally, that would have obviated the need to use the atomic bomb --- your comment?

The actions of the Japanese government falsifies this. The militarists were certain that they could so bloody the invading Americans that the they would settle for an armistice with the Japanese Emperor remaining on the throne and much of the Empire left intact. Remember, even after Hiroshima and Nagasaki were destroyed in a flash and Soviet entry into the war, the Emperor's most senior military advisors counselled emphatically against surrender. They maintained that combat on the Japanese Home Islands would decide the issue -- in Japan's favor. These same leaders, and, most importantly, War Minister Korecheika Anami, subsequently acquiesced to the Emperor's wishes to surrender upon receiving clear, heartfelt direction from Hirohito himself.

It was apparent that continued use of the atom bomb would deny them the murderous "decisive battle" that held out at least some prospect of a settlement on their own terms. After the news of the Nagasaki blast was announced during a meeting of the Supreme War Council, Prime Minister Kentaro Suzuki said "the United States, instead of staging the invasion, will keep on dropping atomic bombs."

Q. So, is there any solid proof that Japan was on the verge of surrender and that unconditional surrender was responsible for prolonging the war?

No. Although analysts Herbert Bix and Sadao Asada approached the subject from somewhat different perspectives, they have conclusively demonstrated that it was the unrealistic and incompetent actions of Japan's leaders that caused the war to continue.

Q. If the US had invaded, would Washington have used atomic bombs?

The US Army's chief of staff, General George C. Marshall, was a strong proponent of the use of tactical nuclear weapons and poison gas. If the Japanese did not surrender even the US use the atomic bomb to destroy the four cities on the approved target list, he was going to move to retain all subsequent bomb production for tactical, instead of strategic, use. When Emperor Hirohito broadcast the Imperial Rescript for surrender on August 15, American plans were already underway to use approximately nine bombs to support the three invasion sites on Kyushu and approaches to the area.

This would have amounted to six nuclear detonations in a tightly packed, triangular zone measuring 65 x 40 x 45 miles with up to three more blasts within this area or points to the north affecting millions of Japanese on Kyushu and Shikoku and, ironically, millions of Americans on Kyushu and the Philippine Sea. Asia Sentinel
Posted by Kerry B. Collison at 4:44 PM