Indonesia to Buy Air-to-Surface Missiles From the United States 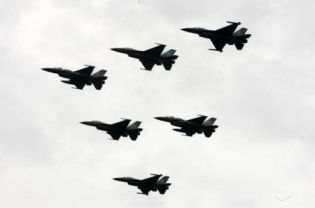 Indonesia is taking advantage of a scramble by major powers to boost their influence in the Asia Pacific to build its defense capabilities, analysts said.

“Our F-16 fighters must be equipped with the most sophisticated weapons,” said Brig. Gen. Hartind Asrin, an Indonesian defense industry spokesman. “That’s standard for a jet fighter such as the F-16.”

He said Indonesia’s purchase of the missiles, which have a target range of up to 22 kilometers, would not worry neighboring countries because Jakarta only wanted to modernize its defense capabilities and had no intention of attacking another country.

“In peacetime, the system aims to create a deterrent,” he said. “This deal is only to safeguard our territorial sovereignty. It is not for offensive purposes, as is clearly enshrined in our Constitution.”

The sale, valued at $25 million, would be the latest US move to boost security ties with friends and allies in a region that has been stirred by China’s growing military clout and territorial assertiveness.

“The Indonesian Air Force needs these missiles to train its F-16 pilots in basic air-to-ground weapons employment,” the Pentagon’s Defense Security Cooperation Agency said in the notice to lawmakers.

The security agency added that the arms sale would contribute to making Indonesia “a more valuable regional partner in an important area of the world.”

Defense relations between Indonesia and the United States returned to normal conditions in 2010 when the US military renewed its relations with Kopassus, Indonesia’s special forces. Many saw the normalization of defense ties as a demonstration of significant US re-engagement in the region as China continues to increase its defense spending. Reopening the US arms markets to Indonesia is a natural next step in maturing military-to-military relations.

Indonesia’s move to buy the missiles comes after President Susilo Bambang Yudhoyono announced last week that the country’s defense budget for next year would increase to Rp 77.7 trillion ($8.2 billion), from Rp 61.5 trillion this year.

The defense budget is still less than 10 percent of China’s, which stood at $89.8 billion last year. The United States topped the world in defense spending last year, with a $739.3 billion budget.

In the region, Singapore and Malaysia have defense budgets of $9.7 billion and $4.8 billion, respectively, this year.

Indonesia has 10 F-16s, and after a meeting between Obama and Yudhoyono last November, the United States announced that it was giving, not selling, Jakarta another two dozen secondhand F-16C/D fighter planes to strengthen bilateral ties and foster what the Pentagon has called a “much-needed” capability to protect Indonesian airspace.

The number of missiles being sought by Indonesia would support both the existing fleet and the 24 planes being provided as US surplus, the notice to Congress said.

Indonesia was in a strategic position in the rivalry between China and the United States, as well as in the South China Sea dispute, and should be able to use its bargaining chips against the major powers to boost its defense capability.