The implications of China’s slowdown 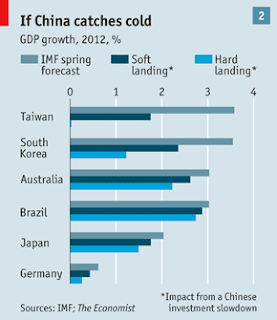 CHINA, an ancient civilisation, is still in its economic adolescence, a phase marked by growth spurts and mood swings. Other emerging economies endure this awkward period in relative obscurity, attracting only cursory attention. China has no such luck. It has become big before becoming rich, inviting scrutiny typically reserved for mature economies.

China may not be a member of the G7 group of big, rich democracies. But it is already a member of the so-called S5, or Systemic Five, a group of economies subject to extra IMF attention because of their “systemic” significance. China, according to the fund, is the most “central” trading power in the world, based on its extensive trade links to other economies that are themselves tightly interwoven. It is the biggest or second-biggest trading partner for 78 countries. Its appetite for imports, especially the base metals and oil that feed its vast industrial machine, flatters the exports of countries as far afield as Azerbaijan and Angola.

Trade is not the only measure of China’s economic influence. Many foreign companies have set up shop inside the country, profiting from its market without having to export to it. To obtain a broader measure of multinational exposure to the Middle Kingdom, The Economist has prepared a stockmarket index made up of 135 S&P 500 companies, weighted by China’s reported share of their revenues. (For companies that report revenues only for the Asia-Pacific region as a whole, we have assumed China’s share of regional revenues reflects its share of the region’s GDP.)
This new and improved “Sinodependency” index has massively outperformed the S&P 500 in recent years, climbing by almost 129% since the beginning of 2009, compared with the S&P 500’s gain of 57% (see chart 1). It has also performed far better than China’s own stockmarkets. Buying American firms exposed to China may be a better investment strategy than buying Chinese firms themselves. That is just as well, because foreign participation in China’s stockmarkets is still circumscribed.

China’s precocious economy has, however, turned sullen and morose of late. The preliminary results of HSBC’s August survey of over 420 manufacturing firms, many of them private, showed orders falling and inventories backing up. The ratio of orders to inventories was at its worst since December 2008. This disappointment followed the announcement that house prices rose in 49 out of 70 cities last month, a revival deemed bad news as it might delay further monetary easing.
A sharp slowdown in Chinese investment was one of the risks examined by the IMF in a report this month on the systemic five. Ashvin Ahuja and Malhar Nabar of the fund have calculated the impact on China’s trading partners of a one-percentage-point slowdown in Chinese capital formation. In the second chart, we have extrapolated their results. Our baseline is the IMF’s 2012 growth forecasts for each country (made back in April, a happier time). The chart shows the effect on growth of a soft landing, which we define as a two-percentage-point slowdown in China’s investment growth. It also depicts a harder landing, which we define as a 3.9-point slowdown, the same as it endured in 2008.

A hard landing would hobble South Korea and bring Taiwan’s growth to a shuddering halt. But growth in Brazil and Australia would hold up surprisingly well, perhaps because their currencies would fall, absorbing some of the shock. However, these estimates capture only the direct impact of a Chinese slowdown, as transmitted through its trade links. Messrs Ahuja and Nabar point out that stockmarkets around the world would also swoon. And some countries would be hit by indirect effects: Germany, for example, would suffer both a loss of exports to China and to countries that sell a lot to China. Adolescents have an uncanny ability to spoil things for everybody. The Economist