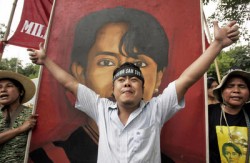 From 27–30 May 2012, Indian Prime Minister Manmohan Singh completed a three-day state visit to Myanmar, where he held talks with the Myanmar government and, for the first time, with Aung San Suu Kyi.

Various commentators suggest that Myanmar’s developing relations with India have particular significance, and perhaps even some wider strategic importance for Southeast Asia and the international community.

There are special connections between India and Aung San Suu Kyi, whose mother was the Myanmar Ambassador to India in the 1960s. Although one expatriate Burmese media group (Mizzima News) is still based in New Delhi, India’s ‘democratic’ connections with Myanmar eroded after 1995, when the then Indian government switched its Myanmar policy from support for Aung San Suu Kyi to support for the Myanmar government, then under a military regime. While official ties were thereby regularised, over the next 20 years they lacked momentum and were notable neither for their success nor their warmth.

Although Manmohan Singh’s visit was the first prime ministerial visit since that of Rajiv Gandhi in 1987, the visit followed the pattern of other more frequent high-level Indian visitors to Myanmar in recent years. An impressive twelve bilateral agreements across a wide range of practical activities were signed during Manmohan Singh’s visit, with an appropriate emphasis on ‘connectivity’ (for example, establishing a cross-border bus service for the first time). An agreement on a significant commercial credit of US$500 was also concluded, but otherwise the agreements were unremarkable. A commentary by a former Indian Ambassador to Myanmar puts this visit in as positive terms as could be expressed.

In 2010, Indian trade with Myanmar stood at US$1.2 billion, far short of the US$4.4 billion between China and Myanmar. Commercially, a two-way trade target of US$3 billion by 2015 does not look very ambitious, but even this may not be reached. In contrast with the rich base for growth provided by Myanmar’s rapidly developing Chinese neighbouring province of Yunnan, the states on both sides of the Myanmar-India border are among the poorest in each country. So Myanmar-India border trade cannot be expected to be a foundation for large growth in bilateral trade and investment. Moreover, the trade routes to the more dynamic domestic markets in both countries are longer and much less developed along the India-Myanmar border, making other markets more attractive.

Cross-border security issues have occasionally been a subject of mutual concern, and have an unsettling effect for both countries. India has been worried about the efficacy of Myanmar’s efforts to contain separatist elements inside Myanmar territory. Myanmar has been anxious not to encourage its Naga minority to pursue ideas of a greater Nagaland incorporating Naga groups from both countries and straddling the border. However, these concerns could also fade if the grounds for minority dissatisfaction decline as positive political change take root in Myanmar.

Myanmar has had mixed views about its shared colonial relationship with India and the numbers of Indian workers who were brought to Myanmar under British rule and stayed. It still looks to India for certain support, including commercial support and (somewhat crudely) as a balance to China’s growing stake in Myanmar. Overall, however, India makes a less-attractive market for Myanmar’s business community, which sees China, Southeast Asia and Japan and Korea as preferred opportunities. Defence ties are also under-developed, constrained initially by India’s anti-Myanmar military policies but also because they have not been prized by the Myanmar armed forces. Generally, Burmese tend to look down on Indians living in Myanmar, who continue to be the object of quite direct discrimination. So, whether consciously or not, Myanmar has consistently attached lower priority to its ties with India.

In India, previous rationales given for developing relations with Myanmar tended to see these relations as a tool to achieve some other Indian policy objective, rather than a worthwhile goal in itself. Thus, Myanmar was the window for India’s ‘Look East’ Policy towards Southeast Asia after 1991, and later, competition with China was cited as a reason for strengthening India’s ties with Myanmar. Not surprisingly this gave the impression that India’s priorities lay elsewhere, and that, fundamentally, India was ‘wary’ of investing a major effort into its relations with Myanmar.

Some Indian observers also acknowledge that India’s past performance in pursuing commercial opportunities in Myanmar was lackluster. Earlier attempts to spark a take-off in bilateral economic ties seemed to peter out. The only completed infrastructure project is the cross-border Moreh-Kalewa Road into Chin State on Myanmar’s western border. Finished in 2001, this road is useful in itself, but is a mere 160 kilometres in length. More ambitious projects, such as the Kaladan multi-modal highway, and the Sittwe port development to improve land/water communication links, remain unfinished.

Despite this, well-informed commentators in India see Manmohan Singh’s visit as the first sign that Myanmar is now rising in India’s foreign policy priorities, that the earlier policy constraints of democracy and China are reduced, and that there are grounds now for being more upbeat than previously. They argue that India’s private sector is now becoming more actively engaged with Myanmar and that the Indian government decision to increase assistance considerably will reinforce this trend. Time will tell whether India-Myanmar economic relations actually take off, as hoped, but the new Myanmar government has every reason to welcome these changes.

Trevor Wilson is Visiting Fellow at the Department of Political & Social Change, ANU College of Asia and the Pacific, the Australian National University and former Australian Ambassador to Burma.