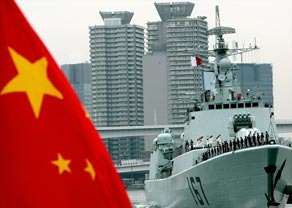 BEIJING – The Central Military Commission, China’s most powerful military body, has approved the deployment of a garrison of soldiers from the People’s Liberation Army to guard islands claimed by China in the South China Sea, the state-run Xinhua news agency said Sunday.

The announcement came as Chinese authorities told state media that 45 legislators elected over the weekend to govern the 1,100 people who live on the island groups of the Spratlys, the Paracels and the Macclesfield Bank — known in Chinese as the Xisha, Zhongsha and Nansha islands — met for the first time on Monday.

The new legislators would not only govern the island groups, many of them consisting of rocks and atolls, but also two million square kilometers of the South China Sea over which China claims jurisdiction, according to state media.
The two moves appeared designed to reinforce China’s claims over the South China Sea a week after a meeting of foreign ministers of the Association of South East Asian Nations in Phnom Penh, Cambodia, at which China, according to diplomats at the meeting, used its influence to stop even a rudimentary communiqué on the South China Sea among the 10 nations.
The establishment of a legislature for the sparsely populated islands, and the dispatch of soldiers, will antagonize Vietnam, which claims the same islands. Vietnam and China have fought since the 1970s over the three island groups, and last month, Vietnam passed a law that claimed sovereignty over the Paracels and Spratly Islands. In response, China said the islands were the “indisputable” territory of China.
The Philippines and China have also been involved in a dispute for months over Scarborough Shoal, an area off the coast of the Philippines claimed by both countries.
In the case of the Nansha, Xisha and Zhongsha islands, China’s State Council approved the establishment of a prefectural-level administration known as Sansha City to replace a lower county level administration last month.
The election of the legislators over the weekend and their meeting Monday at a first session of a people’s congress appeared to be practical steps to show China was serious in its drive to have the South China Sea as its domain.
A mayor, who was formerly led the agriculture department of China’s Hainan provincial government, and three vice mayors were elected Monday by the 45 deputies to run the new Sansha administration, state media reported.
China Daily, an English-language government-run newspaper, described Yongxing Island as a “hidden beauty” formed by white coral shells piled on reefs. Government buildings lined Beijing Road, along with banks, shops and an airport, the newspaper said.
The speed of China’s actions was not surprising, said Wu Xinbo, deputy director of the Center for American Studies at Fudan University in Shanghai. “Now the Philippines and Vietnam are both advancing their claims so China must also respond accordingly with its own plan,” Mr. Wu said.
The People’s Liberation Army garrison that was announced over the weekend would most likely be established on Xisha island, Mr. Wu said. “Xisha is closest to China and the facilities are relatively good.”
In a detailed report on the South China Sea in April, the International Crisis Group said that China had delayed establishing the Sansha city administration to govern the Paracels and Spratly, and appeared more intent on using tourism as way of asserting sovereignty.
Three months later, China has moved rapidly to set up the more powerful administration in response to Vietnam’s legislation claiming sovereignty and “provocations” by the Philippines, Mr. Wu said. New York Times
Posted by Kerry B. Collison at 5:01 PM