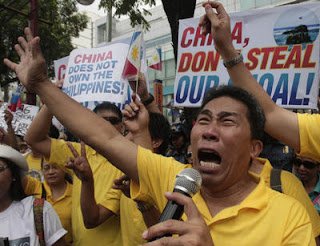 Most claimants in the disputed South China Sea have shown interest and willingness to engage in joint resource development with co-claimant countries, especially on oil and gas exploration (no less than the late Chinese paramount leader Deng Xiaoping maintained a policy of setting aside the sovereignty debacle and pursuing joint development in the area).

But for this to happen, territorial disputes must be temporarily put aside in order to clearly demarcate areas where joint exploration can be conducted. Strong rhetoric must give way to sincere discussion, and pragmatism should prevail over virulent nationalism in order to address immediate economic realities and security needs.

The benefits of joint exploration for a resource-rich but capital- and infrastructure-deficient country like the Philippines includes attracting much needed investment and obtaining the necessary technologies to fully exploit its resources. Joint exploration and resource development could mitigate conflict and reduce tensions, and so diminish the pressure to expand national defence capabilities.

Conducting joint oil and gas exploration with the Philippines offers China a readily available source of energy with some political benefits on the side. By establishing a joint resource development program with a neighbour with whom it has maritime and territorial disputes, China can build its image as a good neighbour and a responsible regional and world power. This collaborative approach will allay the fears of many — notably other South China Sea claimants — that China is determined to gain complete and exclusive control of the South China Sea.

The 2002 Timor Sea Treaty between Timor-Leste and Australia is a good example of joint resource management. The treaty created a Joint Petroleum Development Area in disputed territorial waters between the two countries. The Timor Sea Treaty compromised neither country’s sovereignty because it did not draw a final boundary between the two neighbours. A designated authority was established to administrate all petroleum-related activities in the area, with the two governments equally represented. Australia gave enormous concessions to Timor-Leste under a sharing scheme of 90-to-10, with Dili getting 90 per cent and Canberra just 10 per cent of the revenue.

Signed on the day Timor-Leste gained full independence, the treaty was a great relief for the country, offering a promise of sustained economic benefits crucial for its nation-building process. It also saved Timor-Leste the huge expense of having to develop its external defence capacity to ensure sovereign control over its maritime territory at a time when it could not afford to do so.
For Australia, the deal offers a steady income from oil and gas while affirming Canberra’s credentials as a good neighbour.

One of the pitfalls of the Timor Sea Treaty from Dili’s perspective is that the resources extracted from one of the major fields in the joint development area, the Bayu-Undan field, are all processed in Australia, giving Dili less control over the end product despite its 90 per cent cut in royalties.

To avoid similar contentions, a joint hydrocarbon resource deal between the Philippines and China should place downstream activities in the Philippines, because it is closer to potential hydrocarbon-rich waters. In this way the Philippines could improve its local downstream resource industry, generate jobs, provide continuous energy supply and spur economic growth. State-owned Chinese energy companies such as CNOOC, CNPC and Sinopec have the capital, technology and expertise to help PNOC and local Filipino energy companies develop the country’s indigenous energy industry, reducing the country’s dependence on imported oil. For China, such a joint cooperation will provide it a proximate source of energy, reduce oil and gas imports from the volatile Middle East, help foster stability in its maritime corridor and win the goodwill of other claimant countries, as well as the international community. If the deal bore fruition, it may even be the start of other similar cooperative endeavours in extracting hydrocarbon resources in the hotly contested area. Joint resource exploration is a way to improve the stability and security of contested areas, avert conflicts, foster cooperation in sustainable resource extraction, environmental conservation, scientific studies and joint response to natural disasters.

The international community is closely watching the stand-off between the Philippines and China over the Panatag Shoal (Scarborough Shoal or Huangyan Island in Chinese). If China acts too aggressively, it will reinforce its neighbours’ anxiety over China’s willingness to use heavy-handed tactics. Other countries in the region, including Korea, Japan, and South China Sea claimants, are observing China’s behaviour in the hope that it may indicate how Beijing is likely to respond to their own maritime claims.

The actions of the Philippines will also be scrutinised at home and abroad. Manila wants to demonstrate that it is able to implement an independent foreign policy without being portrayed as part of a ‘grand conspiracy’ against China, which would doubtless harm Manila’s own image.

Joint resource development is a good way for Manila and Beijing to resolve their territorial disputes. Energy security, harmonious relations, good international image and overall peace and stability in one of the world’s busiest sea lanes are all at stake. The Philippines and China could prove that neighbours can peacefully resolve their differences, and though the decision may face short-term domestic opposition, it stands to improve regional stability in the long-run.

Lucio Blanco Pitlo III, is a MA Asian Studies candidate from the Asian Center, University of the Philippines, and Researcher for Forging a New Philippine Foreign Policy.